Slate is a fine-grained metamorphic rock with perfect cleavage that allows it to split into thin sheets. Slate usually has a light to dark brown streak. Slate is produced by low grade metamorphism, which is caused by relatively low temperatures and pressures.

Slate has been used by man in a variety of ways over the years. One use for slate was in the making of headstones or grave markers. Slate is not very hard and can be engraved easily. The problem with slate though is its perfect cleavage. The slate headstones would crack and split along these cleavage planes. This is not a desirable attribute for a head stone. Slate was also used for chalk boards. The black color was good as a background and the rock cleaned easily with water. Today it is not very advantageous to use this rock because of its weight and the splitting and cracking over time.

Schist is a medium grade metamorphic rock. This means that it has been subjected to more heat and pressure than slate, which is a low grade metamorphic rock. As you can see in the photo above schist is a more coarse grained rock. The individual grains of minerals can be seen by the naked eye. Many of the original minerals have been altered into flakes. Because it has been squeezed harder than slate it is often found folded and crumpled. Schists are usually named by the main mineral from which they are formed. Bitotite mica schist, hornblende schist, garnet mica schist, and talc schist are some examples of this. 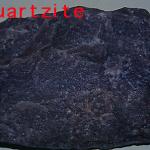 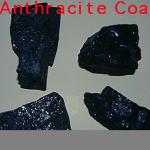 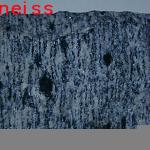 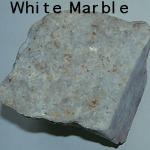 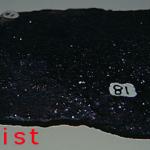 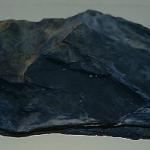