Basalts are dark colored, fine-grained extrusive rock. The mineral grains are so fine that they are impossible to distinguish with the naked eye or even a magnifying glass. They are the most widespread of all the igneous rocks. Most basalts are volcanic in origin and were formed by the rapid cooling and hardening of the lava flows. Some basalts are intrusive having cooled inside the Earth's interior.

Granite is quarried in many places in the world including the United States. The State of New Hampshire has the nickname "Granite State" because of the amount of granite in the mountains of that beautiful state. The Canadian Shield of North America contains huge outcroppings (surface rocks) of granite.

Dacite is an extrusive igneous rock. The principle minerals that make up dacite are plagioclase, quartz, pyroxene, or hornblende.

Obsidian is a very shiny natural volcanic glass. When obsidian breaks it fractures with a distinct conchoidal fracture. Notice in the photo to the left how it fractures. Obsidian is produced when lava cools very quickly. The lava cools so quickly that no crystals can form.

Ancient people throughout the world have used obsidian for arrowheads, knives, spearheads, and cutting tools of all kinds. Today obsidian is used as a scalpel by doctors in very sensitive eye operations.

Gabbro is a dark-colored, coarse-grained intrusive igneous rock. Gabbro is very similar to basalt in its mineral make up. It is composed mostly of the mineral plagioclase feldspar with smaller amounts of pyroxene and olivine.

Rhyolite is very closely related to granite. The difference is rhyolite has much finer crystals. These crystals are so small that they can not be seen by the naked eye. Rhyolite is an extrusive igneous rock having cooled much more rapidly than granite, giving it a glassy appearance. The minerals that make up rhyolite are quartz, feldspar, mica, and hornblende. 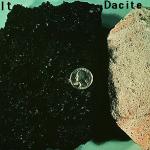 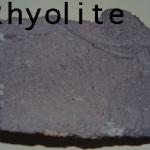 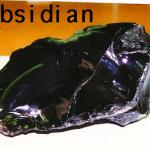 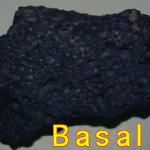 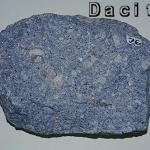 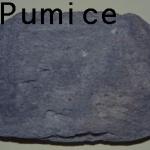 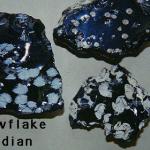 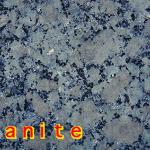 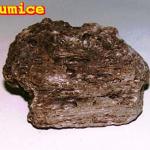 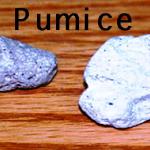 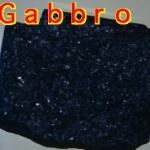