In November of 2009, the Volcano World team and colleagues traveled to the high desert region of Chile, known as the Altiplano, to research and sample the volcanoes, domes, ignimbrites, and ancient lava flows that are abundant across the area. 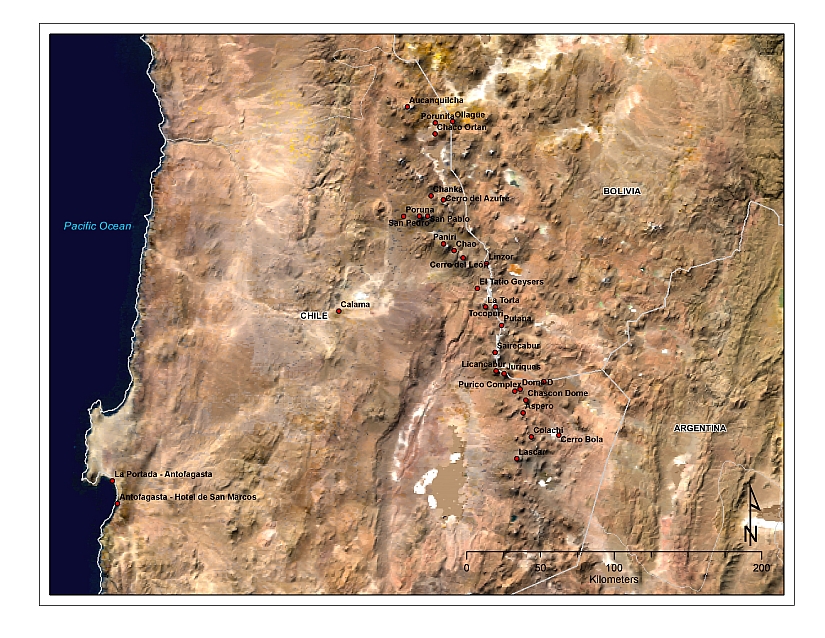 After getting supplies in the port town of Antofagasta and the mining hub of Calama, our team climbed onto the Altiplano Plateau and worked our way along one of the most dramatic and beautiful volcanic arcs in the world.

The tour is split into four sections and a photo gallery.

Select the links at the bottom of the page or here to start your trip! 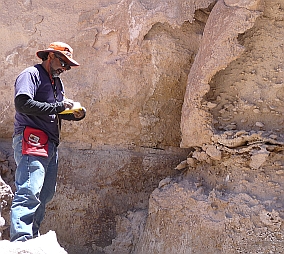 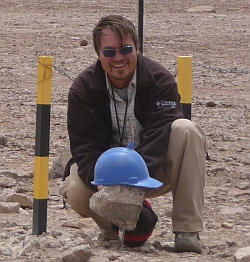 Research Students on the Expedition Included: 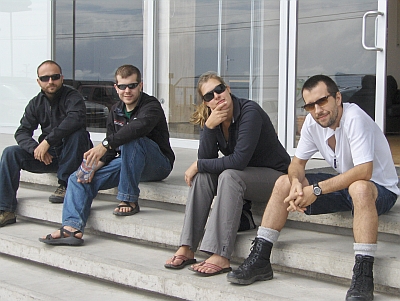 Geology of the Altiplano

For the past 200 Ma, subduction-related volcanism has defined the volcanic activity in the Central Andes. Around 26 Ma, shallowing of the subducting slab as a result of fast, nearly orthogonal convergence resulted in changes in convection and magma supply rates in the mantle wedge. These changes, accompanied by erosion of the lower part of the upper plate by stoping or delamination effectively increased the heat flux in the upper mantle and created a zone of weakness within the crust. Compressive failure of the weakened lithosphere later led to extensive crustal thickening from ~26-14 Ma (Isacks, 1988). Subsequently, the earliest magmatism in the Altiplana-Puna region occurred over a much broader area than the current Andean arc, consistent with a shallow angle of subduction. Steepening of the subducting slab to it’s present dip of 25 to 30° in the mid-Miocene (16-12 Ma) increased the volume of the mantle wedge and promoted melting of the hydrated lithosphere. The steepening of the dip was accompanied by delamination of the continental lithosphere (e.g. Kay et al. 1999; Allmendinger et al., 1997), evidence for lithospheric delamination includes high crustal elevations with lower crustal thicknesses suggesting the crust is supported by hotter more buoyant mantle that has risen into the lower crust and an apparent temporal relationship between the changes in subduction angle and an increased mantle power input that led to crustal melting and the APVC ignimbrite flare-up (Isacks, 1988; de Silva and Gosnold, 2007).

The APVC is a barren volcanic plateau located between 21° and 24° S with an average elevation of ~4000 m. From 10-1 Ma an ignimbrite flare-up deposited at least 10,000 km3 (one estimate said 30,000 km?) of material over an area of about 70,000 km2 in the APVC (de Silva and Gosnold, 2007). Volcanic activity continued from 10 Ma to present, but was punctuated by distinct pulses of activity at 8, 6, and 4 Ma. Prior to 6 Ma activity was widespread across the plateau, however, after 6 Ma eruptions became more focused in the central APVC. The pulse at 4 Ma was the climactic stage of the APVC, and activity since 4 Ma has been comparatively minor, the largest eruptions being those from the Purico and Laguna Colorado centers at ~ 1 Ma (de Silva et al., 2006b).

The ignimbrites from the APVC are all very similar in composition, and are typically of the large “monotonous intermediates” described by Hildreth (1981). They are high K dacites to rhyodacites with very volumetrically minor rhyolites. Andesites and basaltic-andesites are rare and occur as bands and inclusions in the pumices from some ignimbrites, and although volumetrically insignificant they may represent the thermal input into the upper-crustal Antiplano Puna Magma Body (APMB).

Prior to the ignimbrite flare-up, the APVC crust must have been thermally prepared. Delamination events discussed above led to a large increase in thermal input from the mantle. The increased thermal input along with with ongoing arc magmatism and crustal thickening thermally prepared APVC crust (elevated geotherms), resulting in extensive crustal melting. The impact of this increased thermal input was a period of intense generation, transport, and storage of thousands of km3 of magma in the mid crust. The elevated heat flux thermally softened the continental crust causing rapid elevation of the brittle-ductile transition zone. Increasing sizes of eruptions from 10-4 Ma indicate that progressively larger batches of magmas were being stored within the crust as the flare-up proceeded. Storage of increasingly large magma bodies may have been facilitated by changes in the mechanical properties of the wall rock surrounding the magma bodies due to the increased geotherms (i.e. wall rocks are thermally softened and more ductile). The elevated brittle-ductile transition zone coupled with regional tectonic stresses eventually resulted in major roof failures and the eruptions of the voluminous ignimbrites (e.g. de Silva et al., 2006a).

Additional information can be found here.

Traveling in the Altiplano required the team to get used to the elevation. Over the course of the trip, we climbed from sea level to over 5100 m (17,000 feet)! For reference, the peak of the highest mountain in the entire lower 48 states (Mount Whitney, California) is only 4,421 m (14,505 ft).

A guide to the dangers of working at high altitude can be found here. 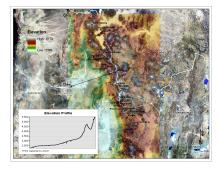 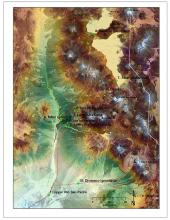 We have split the trip into four sections - primarily to keep the navigation organized - and some stops will represent multiple waypoints at the same general location (aka La Poruna, San Pedro, etc.). The first section (up to and including stop 10) covers from the City of Antofagasta to the Divasaco Ignimbrite seen on the road to Chao. 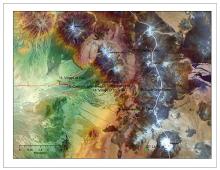 The second leg of our trip (stops 11-20) started at the Village of Turi, took us over Linzor Pass, across the geyser field of El Tatio, and through to the dome La Torta at the Tocopuri volcano. 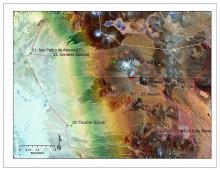 The third leg of our trip (stops 21-30) launched out of San Pedro de Atacama and climbed up into the land of calderas and ancient supervolcanoes. 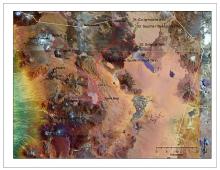 The final section of our trip (stops 31-36) took us into the Valley of the Spires, to the obsidian ring dike Jarellon, and to the most active volcano of the whole trip, Lascar!

This expedition could not have happened without the generous support of the National Science Foundation and the Tower Geosciences Graduate Student Research Grant.