To the Top of Beerenberg

Text and photographs by Johan Hustadnes 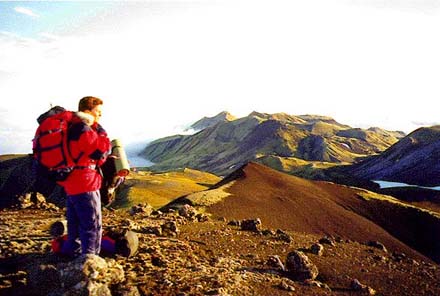 Beerenberg, the world's northernmost volcano is located at Jan Mayen, a remote arctic island. Jan Mayen is 53 km long and is dominated by Beerenberg which rises 2277 meters directly from from the ocean. This photo shows the south end of Jan Mayen. 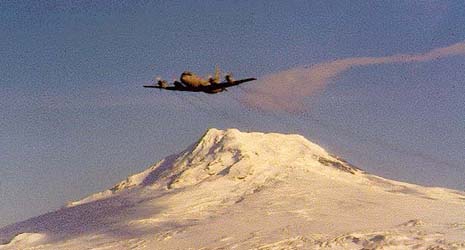 18 people live at Jan Mayen. I was working there 6 months for the Norwegian Metereological Institute together with 3 others. In addition, 14 people work at the navigation system Loran C, owned by the Norvegian military force. Nobody is permitted to stay at Jan Mayen for more than one year at a time, because of its isolation. Mail drops are rare and made by plane. For a long time scientists doubted the volcanic observations from the 18th and19th centuries, until a big eruption added 3 square kilometers to the island in 1970. A huge lava stream from fissures at the north-east side of Beerenberg lasted for 3-4 weeks. During these weeks the sea water along the island was heated from its normal temperature around zero to about 30 degrees Celcius. A smaller eruption occured in the central crater in 1985. These days the only activity is small earthquakes and steam, mostly on the northern side of Beerenberg. In the central crater there is vapor now and then. 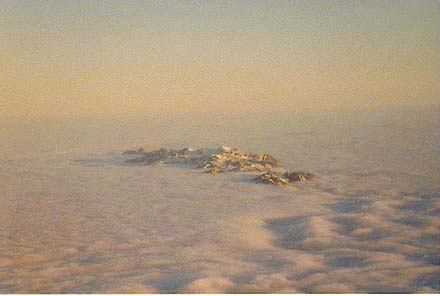 The other mountains are older and were made by fissure craters. The highest of these, the Rudolphtoppen, reaches 769 meters above sea level. The station is located underneath the clouds, to the left of the nearest top. It is very difficult to reach Beerenberg, since only employees and a few guests are permitted to join the eight plane flights a year to Jan Mayen. Private expeditions have not been permitted, since a rescue mission would be very difficult. Besides, the nature of Jan Mayen is very vulnerable. Beerenberg has been visited by the station's crew many times, but since 1992 there have been too many crevasses. An attempt was made in 1985, but failed because of a nasty fall. When I got to Jan Mayen in April I was very anxious to reach Beerenberg, and I envied the French scientists who combined their work with a successful climb. Several of the staff at the station were interested in a trip to Beerenberg, so we ordered better equipment and did some training. One of our problems was that we had to make our attempt in one long day because of the daily routines at the station. From May to July the snow was melting, making it impossible to drive to the mountain in any way, so we had to wait. But personally, I got an unexpected chance. 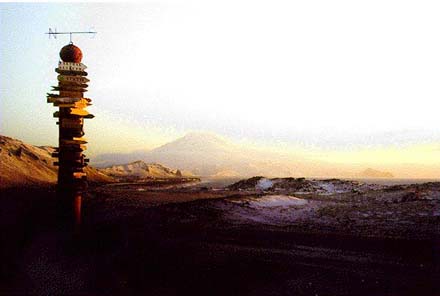 The Dutch Historical Expedition Foundation arrived. The reason for allowing this expedition was that they were skilled mountaineers who make expeditions to places of historical value. (Dutch whalers were the first to make use of Jan Mayen, from about 1620 and onwards, and Beerenberg is one of the few mountains with a Dutch name. Besides, the members of this expedition would be the first Dutch to climb Beerenberg.) Ton Biesemaat, Koos Van Rangedrooy and Roland Prinsen sailed with the author and sailor Eerde Bevuakker in his boat for more than a week up to Jan Mayen. This photo shows the "Totempelen" where the crew places signs, pointing to their homes in Norway. Of course I was anxious to join them, and I was very glad they agreed.

Thursday June 19 we started towards Beerenberg. We carried the skis on our rucksacks and spent this day walking to the old Met. station which is nowadays used as a hut. This walk was combined with filming remains from the whaling period.

Saturday we got up six o 'clock and started in the cloudy weather that is common at Jan Mayen in summer. We mounted our skis and walked into the clouds at 200 meters altitude, hoping we would get over them. 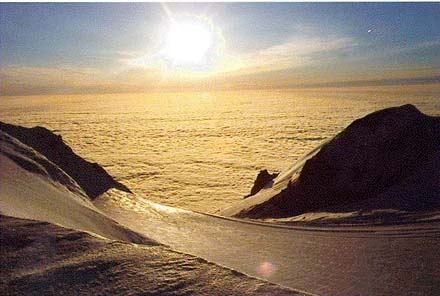 And we did!! Close to the beautiful Pallfy Crater we popped out of the clouds into perfect weather! Due to the clear arctic air the summit seemed very close, even though we had 8 kilometers and 1700 meters height left. We entered the glacier and walked to Birdkollen at 800 meters before we made a camp underneat a serac. The sun was warm and we spent some nice hours eating and relaxing. This photo shows the midnight sun in the Central Crater. The crater is 300m deep and 1000 meters wide. Occasionally steam escapes from the crevasses to the left. From the crater the Weyprecht glacier goes all the way to the ocean. 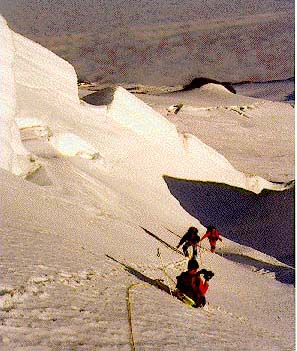 At six in the evening we started towards the top. The glacier is moderately sloped to the Nunatakken (a cliff) at 1500 meters, but at 1200 meters two of us stepped over a deep crevasse, and we realized that we had better use harnishes and a rope. At Nunatakken we made a good rest before we changed from skis to crampons and iceaxes. Above this point we had some problems finding a way through a labyrinth of crevasses. Most of them were narrow and we could take a long step or jump over them, others were bigger, forcing us to try new paths. As the glacier became steeper there were less big crevasses, but strange enough we now started to step through the smaller ones. We aimed towards a big cliff , but before we got there both Koos and Roland had fallen in to their waists. It wasn't much of a problem with the rope tight. Photo taken just above Nunatakken. 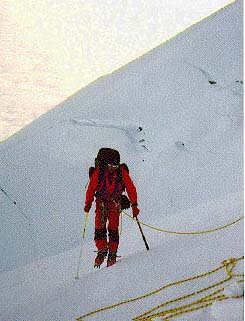 Above the cliff there were less crevasses and we got into the shadow of the crater. This made the snow covering the crevasses stronger. Now we were moving up "Bratthenget" (The steep side) and it was hard to walk. Anyway, the experience was unique. Further up we stepped through again. We aimed directly at the crater rim, but it occured to be difficult to cross the bergschrund. We walked on a shelf to the right and found a better place. Photo of Koos Van Rangedrooy at 2000 meters. 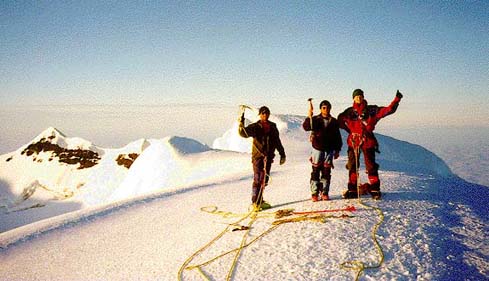 The bergschrund was about four meters wide, but the snow almost made a bridge, and we were able to climb over it, using our ice axes and then walk the last steps to the rim at 02 in the night. It was all quiet, and we could even feel a little warmth of the midnight sun! Roland Prinsen, Ton Biesemaat and Johan Hustadnes at the summit of Beerenberg. 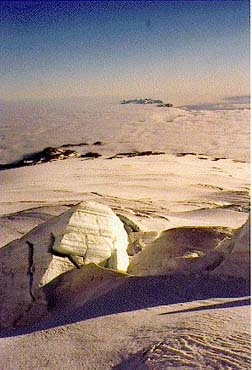 The view was beautiful! To the South we could see the shadow of Beerenberg on the clouds, and the other mountains looked like a small island where they rose from the clouds which were 1900 meters below. Photo shows the view to the south of Beerenberg. 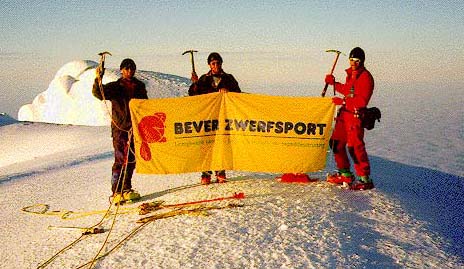 In the crater, 300 meters underneath us there was a field of snow, measuring one km across. It is slowly moving through an opening in the crater, into the Weyprecht glacier, all the way to the ocean. No steam tonight. Above the opening we could see the midnight sun, colouring the skys yellow. We took a long rest at this point. I almost fell asleep, but it was a little too cold. Photo of Roland Prinsen, Ton Biesemaat and Koos Van Rangedrooy at the top, in the midnight sun! 02 AM.

Then we jumped the bergschrund and descended the same route to Nunatakken. At this time we were rather tired, and we made two breaks on our way down. The snow was frozen, so skiing down the beautiful slope became a test of patience. We arrived the camp at eight o'clock, Sunday morning. There was only place for three in the tent, so I dug a hole in the serac. From the sleeping bag I could see Beerenberg to the right, and the other mountains rising above the clouds to the left.

We got up Sunday at 1 p.m. The weather was still nice, so we just enjoyed our situation until 4 and then started descending. We skied into the clouds at the Pallfy crater and followed our tracks downwards. When we had almost reached sea level, close to the Northern lagoon, Koos was unlucky and had a nasty fall. We thought the ancle was sprained (it was broken) and discussed calling for help on the radio, or going to the Old Met. station, where he could be picked up by boat. In the end, Koos forced himself to walk the three kilometers to the first possible pick up point. Koos used about an hour on this painful walk. At nine o'clock we were finally picked up by a Mercedes Jeep and transported directly to the midsummer party on a beach. There we were welcomed with drinks, speeches, and so on. The bonfire wasn't burning well, so more lumber was transported from the beach with a bulldozer, before diesel was added in the same way. After enjoying the party for a while we got a shower, Koos was taken care of by the nurse, Mildrid, and I went to work.

Koos had a very unpleasant sailing trip back to Bergen Norway, and then he spent 7 weeks with his leg in plaster, before he could start recovering. For me it was a great experience to join this fine group. Lots of thanks to them!

The 12 of August the staff at the station made it's attempt. We got up at 03 in the morning and started at 05.30 from a hut called Ulla. We had a long, but nice trip to Nunatakken, in this summers hottest days, (13 centigrades at sea level) even thou 40 knots wind was heavy to walk through. Above Nunatakken there were even more crevasses, and we realised we were takinga big risk. Anyway we had made a good attempt, and we got to see Jan Mayen from a new angle.

I also have to mention that living on a place like Jan Mayen for six months was an experience I would not miss.

VolcanoWorld Thanks Johna for sharing his experience and his photographs.

Click HERE for more information on Svalbard and Jan Mayen.

‹ Mount St. Helens by Helicopter! up