This review presents some of the current knowledge of volcanoes in Hawai'i. It was originally written for a NASA-sponsored workshop about Hawaiian volcanism. We hope that with this review you can gain a better understanding of the processes and landforms that are associated with Hawaiian volcanoes. Many of these processes and features can also be found at other basaltic volcanoes on Earth. Additionally, Kilauea and Mauna Loa and have also become the primary volcanoes used by planetary geologists as analogs for volcanoes on Mars and Venus.

This review presents ideas derived by many volcanologists over the last few decades, the most prominent of whom are George Walker, Dave Clague, Jim Moore, and the late Gordon Macdonald. Scientists at the U.S. Geological Survey's Hawaiian Volcano Observatory, the University of Hawai'i, and elsewhere have made further important contributions to the study of Hawaiian volcanism, and their willingness to share their knowledge is gratefully acknowledged. Hypertext references refer to a bibliography that provides just a taste of the extensive literature available to those interested in studying Hawaiian volcanoes.

Basaltic shield volcanoes comprise a small percentage of Earth's volcanoes (~8%; Simkin et al. 1981). Hawaiian volcanoes are by far the best-studied examples of basalt shields. This means we have really only studied a small sample of a small percentage of Earth volcanoes. This review starts with large-scale structures and works to smaller and smaller features. Keep in mind how they all fit together to form a complex volcano.

Map of the main Hawaiian islands and nearby ocean floor. Note the Hawaiian trough and Hawaiian arch (dotted and dashed lines, respectively). Note also that some of the volcano rift zones extend well offshore.

Hawaiian volcanoes reach these huge volumes in relatively short periods of time. Mauna Loa is thought to have begun forming on the sea floor some 500,000 years ago, although this is poorly constrained. For Mauna Loa, these numbers yield an average eruption rate of 0.085 cubic kilometers/year or 2.7 cubic meters/second. Interestingly, this is almost exactly the same eruption rate that is seen during low effusion-rate eruptions, and from observation of such eruptions this has been proposed to be the supply rate from the mantle (e.g. Swanson 1972, Dzurisin et al. 1984).

Plate tectonics provides a modern explanation for the presence of the Hawaiian volcanoes and their age progression from young in the southeast to old in the northwest. The lithosphere consists of the crust and uppermost mantle, both of which are rigid, and together can be divided into sections called plates. Beneath the lithosphere is the asthenosphere, a hot plastic layer on which the lithospheric plates can slide. Somewhere beneath the asthenosphere, and possibly as deep as the core-mantle boundary, is a hotspot, and the Hawaiian volcanoes are formed because of it. There are approximately 42 hotspots on earth (Duncan & Richards 1991).

Map of the Hawai'i-Emperor hotspot trace. Sinking and erosion causes the volcanoes to become smaller the farther they are from the hotspot. The last island where any volcanic rock sticks up above sea level is Gardner pinnacles. From Gardner to Kure the islands are atolls - coral reefs built on top of volcanoes that are now submerged. Beyond Kure even the coral has submerged and there are only seamounts (mountains on the ocean floor that don't make it to sea level). The seamounts at the bend have been dated at ~40 million years, and Meiji seamount is about 70 million years old. The ocean crust itself in the vicinity of Hawaii is about 90 million years old. (From Clague & Dalrymple 1987).

The exact nature of hotspots is poorly known, but it is known that they are sources of heat and/or magma that is supplied to the surface. Because they are stationary with respect to the moving lithosphere (as well as with respect to each other), linear chains of volcanoes form on the overlying plates and these volcanoes get older as you look in the direction of plate motion.

At Hawai'i, the Pacific plate is moving at ~9 cm/year towards the northwest. The Hawaiian volcanoes grow progressively older from the submarine volcano Lo'ihi and the island of Hawai'i at the southeast end of the chain through the main islands, through the leeward islands (mostly atolls formed on old submerged volcanoes), and beyond Kure atoll to the Emperor seamounts, the northernmost and oldest of which (Meiji Seamount) is being subducted under Kamchatka. The bend in the Emperor seamount chain reflects a change in plate motion about 40 million years ago. 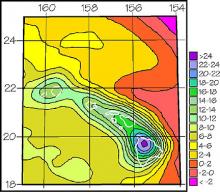 This is a map of the "geoid" in the vicinity of Hawai'i. If the Earth were all water, or at least if you cut a bunch of canals through the continents so that water could flow freely between the oceans, the geoid would be the surface of that water. This imaginary body of water (the geoid) reacts to the force of gravity, which is not constant everywhere on Earth. Where the force of gravity is stronger more water will be attracted and flow into the area making the geoid height higher. Areas with lower gravity will be the places that give up this water and there the geoid height will be lower. In Hawai'i, however, there is no need to have an imaginary surface of water because we're surrounded by the Pacific Ocean.

Does this mean that the ocean is not "flat" in the vicinity of Hawai'i? Yes! The excess of dense mantle material provided by the upwelling hotspot means that the force of gravity is higher centered over the hotspot. The ocean surface is actually tilted upwards toward the big island of Hawai'i. The units are in meters, meaning that off the north coast of the big island the geoid is about 22 meters higher than the reference level. You couldn't actually see this tilting of the ocean surface with your eyes because it is very gradual and would be masked by waves. (Data courtesy H. Haack).

Uplift caused by the hotspot has bulged the Pacific plate upward over a broad region approximately 400 kilometers wide called the Hawaiian swell. This brings an excess of dense mantle material to near the earth's surface, and this extra mass actually results in gravity being slightly higher around the Hawaiian chain. At the same time, the loading of the volcanoes onto the heat-weakened swell has warped the center downward. This combination of uplift and subsidence (see image) has formed a broad m-shaped profile; the resulting structures are the Hawaiian trough adjacent to the islands, and the Hawaiian arch outboard of that. Recently the arch has been found to be the source of very high-volume lava flows (Holcomb et al., 1988; Clague et al. 1990). 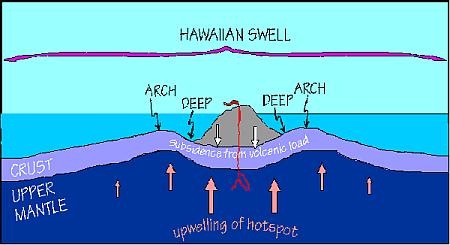 Subsidence is greatest directly over the hotspot, for it is here that the lithosphere is the most thermally weakened and at the same time the greatest amount of lava is being loaded. At Hilo, tide gauge measurements during the past century have recorded sea level going up relative to the land at a rate of 4 mm per year. Worldwide, sea level has been rising ~1.5 mm/year during this time, so the extra 2.5 mm/year change in Hilo must be due to subsidence of the big island (Moore 1987). The southern part of the big island, more directly over the hotspot, must be sinking even faster.