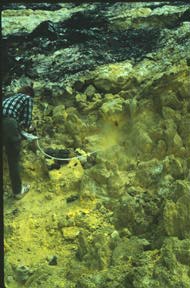 Understanding gases dissolved in magma is critical in understanding why volcanoes erupt. Bodies of magma rise in the crust until they reach a point of neutral buoyancy. The expansion of gases brings the magma closer to the surface and drives eruptions. The interaction between the viscosity and temperature of the magma and the gas content determines if an eruption will be effusive or explosive.

Gases also pose a hazard at many volcanoes. At other volcanoes, the gradual release of gas acts as an irritant and may pose a long-term health hazard.