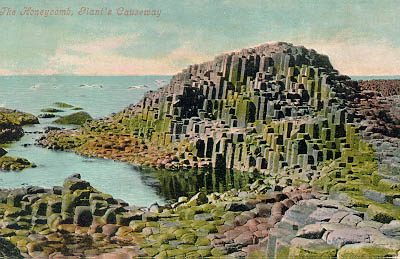 20th century postcard of the Honeycomb at Giants Causeway

Columnar jointing forms in lava flows, sills, dikes, ignimbrites (ashflow tuffs), and shallow intrusions of all compositions. Most columns are straight with parallel sides and diameters from a few centimeters to 3 m. Some columns are curved and vary in width. Columns can reach heights of 30 m. 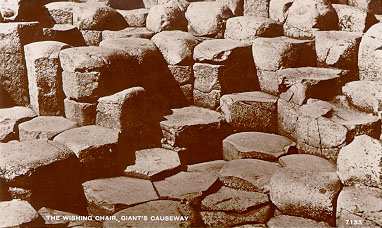 The columns form due to stress as the lava cools (Mallet, 1875; Iddings, 1886, 1909; Spry, 1962). The lava contracts as it cools, forming cracks. Once the crack develops it continues to grow. The growth is perpendicular to the surface of the flow. Entablature is probably the result of cooling caused by fresh lava being covered by water. The flood basalts probably damned rivers. When the rivers returned the water seeped down the cracks in the cooling lava and caused rapid cooling from the surface downward (Long and Wood, 1986). The division of colonnade and entablature is the result of slow cooling from the base upward and rapid cooling from the top downward. 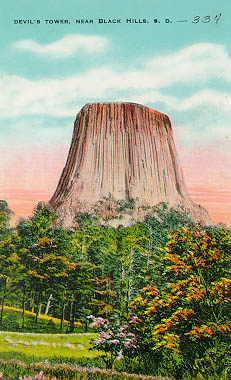 1931 postcard of Devils Tower, Wyoming, a shallow intrusion that formed columnar jointing as it cooled.

Possible mechanism for the formation of columnar jointing at Devils Tower. Isotherms are layers with the same temperature. Joints formed perpendicular to the isotherms as the rock cooled. From Spry (1962).

Old Models for the Formation of Columnar Jointing:

In 1804, Watts suggested that "molten magma solidified around a series of isolated centres to form large plastic balls, which when pressed together gave the typical hexagonal symmetry" (Spry, 1962). In 1916, Sosman proposed that the columns are the results of a system of hexagonal convection cells. Sosman's model was based on experiments of wax or oil in a flat dish. Critics noted that lava flows do not gain heat from their bases but actually lose heat from the top surface. Furthermore, the shape of the convection cells did not resemble hexagonal columns.

There are more than 40,000 columns at Giants Causeway. German composer Felix Mendelssohn based his famous 1830 "Hebrides Overture" on the sound of the waves filling and draining Fingals Cave. The similarity of the shape of the columns to those of quartz crystals was once used to support the theory (called Neptunism) that volcanic rocks precipitated from water. 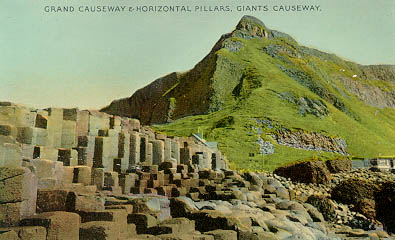 Postcard of the Grand Causeway & Horizontal Pillars at Giants Causeway. 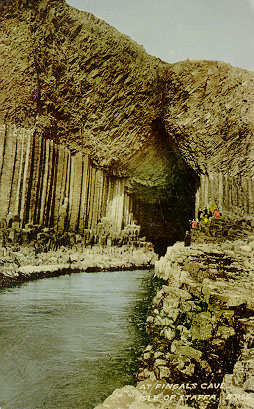 Irish Folklore for the Origin of Giants Causeway and Fingals Cave: Finn Mac Cool, an Irish Giant, wanted to fight his Scottish counterpart, Finn Gall. Mac Cool drove the columns in place, one at a time, until the causeway reached Scotland (Fingals Cave). Mac Cool was so tired from the hard work that he returned home to rest. Finn Gall followed the causeway to Ireland. He found Mac Cool sleeping and Mac Cool's wife, a very shrewd woman, told Finn Gall that this was her baby sleeping. Finn Gall grew alarmed, thinking this giant baby's father must be of incredible size and that he would surely lose any fight. Finn Gall fled back to Scotland. As he did, he destroyed the causeway. Only the two ends of the causeway survive to this day.

Mackin, J.H., 1961, A stratigraphic section in the Yakima basalt in south-central Washington: Rep. Of Investigations No. 19, Div. Mines and Geol., State of Washington.