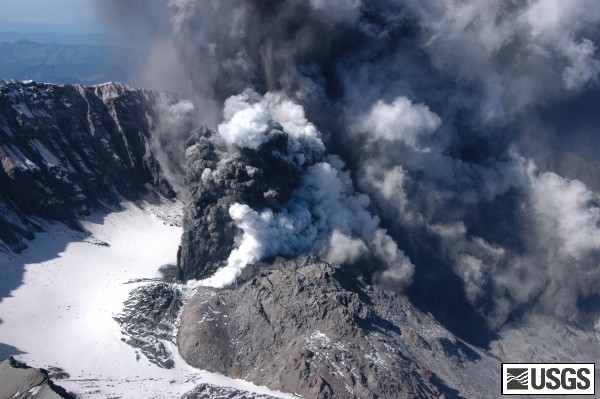 Prior to 1980, Mount St. Helens formed a conical, youthful volcano sometimes known as the Fuji-san of America. During the 1980 eruption the upper 400 m of the summit was removed by slope failure, leaving a 2 x 3.5 km horseshoe-shaped crater now partially filled by a lava dome. Mount St. Helens was formed during nine eruptive periods beginning about 40-50,000 years ago and has been the most active volcano in the Cascade Range during the Holocene. Prior to 2200 years ago, tephra, lava domes, and pyroclastic flows were erupted, forming the older St. Helens edifice, but few lava flows extended beyond the base of the volcano. The modern edifice was constructed during the last 2200 years, when the volcano produced basaltic as well as andesitic and dacitic products from summit and flank vents. Historical eruptions in the 19th century originated from the Goat Rocks area on the north flank, and were witnessed by early settlers. (Description from the SI/USGS Global Volcanism Program) 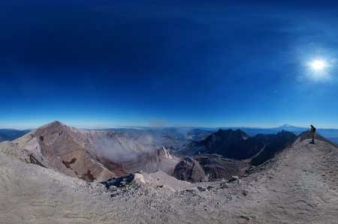 Dan Taylor and the team at Studio 360 have put several amazing panorama's taken from the summit of Mt. St. Helens online. You can view a current 360 panorama and compare it with one taken in 2003. Amazing images, great work!

Several great MSH pictures were also recently sent to us by our good friend and VW alum Prabhu Ram.

During August 06, VW resident volcanologist Dr. Shan de Silva travelled to MSH, taking some exclusive high-res close-up photographs inside and around the crater!