On our drive to the Silapeti Group located to the northeast of Tocanao, Lazcar Volcano (#0353) is visible in the distance. Fumaroles were seen actively degassing on Lazcar in November of 2009. Licancabur, a stratovolcano is also visible from the road (#0354).

The southern section of the ignimbrites is most complete in the gorges or quebrada around Silapeti. Five ignimbrite units are exposed that comprise the Silapeti Group:

Once you reach Silapeti, there is a noticeable, clean trail that leads you down the canyon and provides a great opportunity to see the complete section of ignimbrites. It is also a great idea to begin the hike in the morning in order to arrive at the base of the canyon by midday for some shade and a nice lunch break by the river.

The top layer of the quebrada is the uppermost member of the Silapeti Group, the Purico ignimbrite, 1.35 Ma. The Purico is comprised of Lower Purico I, Lower Purico II and the Upper Purico (see following descriptions of Purico). The main volume of the ignimbrite is the typical non-welded, crystal-rich ignimbrite. The Purico contains large pumice clasts that are often concentrated in "rafts" or lenses. Minerals include course-grained hornblende, quartz, small copper-colored biotite and plagioclase. The matrix is white/pinkish, very ashy and has a devitrified glassy exterior. The Purico Ignimbrite was deposited during the late-stages of the APVC formation.

The Talabre ignimbrite, 2.17 Ma is a rhyolite, homogenous, well-indurated unit. The matrix is fine-grained, crystal-poor (10-15%) and contains plagioclase and copper-colored biotite. Tubular pumice and lithic clasts are common. The deposit is extremely thin (<5 m) and is only exposed as wedges within the canyon. The unit has been subjected to intense vapor phase alteration. When the flow was deposited, the material was very gas-rich and as the gases escaped, the crystals were altered. The gas rich nature of the ignimbrite gives it a sillar texture. The source area for the Talabre ignimbrite is a small caldera now occupied by the Salar de Aguas Calientes in the southern La Pacana caldera. 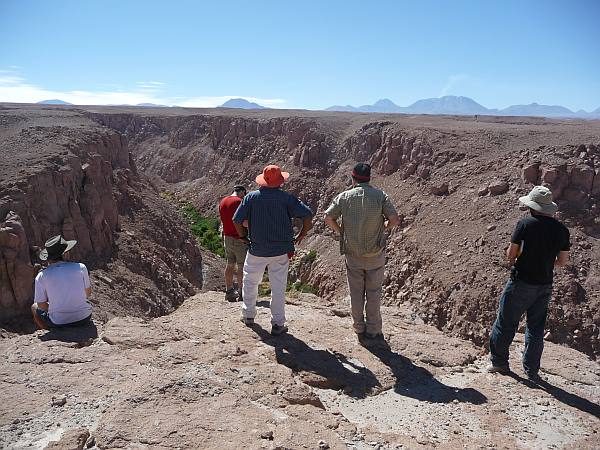 The Atana formation is directly beneath the Tocanao ignimbrite and consists of two units: the younger Atana ignimbrite and the older Tocanao ignimbrite. Both members were likely the result of the eruption from the La Pacana caldera. The Tocanao is thought to represent the volatile-rich cap of the magma chamber, which when erupted, actually caused the dome to collapse. When the caldera forms, Plinian eruptions are less likely, which explains why the Atana pyroclastic flow followed the Tocanao with no fall layer deposited between them.

The Atana ignimbrite, 4.09 Ma is the next layer of rocks that are visible on the walk into the quebrada. The unit is indurated due to vapor phase alteration. The ignimbrite is dacitic and contains abundant crystals including cristobalite or quartz, plagioclase, altered biotite and hornblende. The Atana lacks abundant pumice clasts and has relatively small lithics (~5 cm). The Atana was likely erupted from the bottom of the La Pacana magma chamber, which explains its crystal-rich nature. 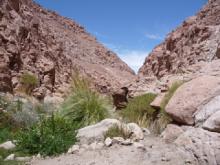 The Tocanao, 4.49 Ma is very similar to the exposure in the Tocanao Quarry (Stop 22). It is a crystal-poor rhyolite that sounds flat when it is hammered into. Little silky pumices are distinctive, elongated clasts that have been formed by vapor-phase alteration. The pumices are easily removed by erosion, leaving holes in the deposit and giving the ignimbrite a spongy texture. They contain plagioclase and biotite crystals. Abundant tubed pumices are found at this location. The Tocanao was likely erupted from the top of the La Pacana magma chamber, which explains its crystal-poor nature.

The Pujsa ignimbrite, 5.87 Ma is the lowermost unit of the Silapeti Group. The deposit is a purple-gray, crystal-rich (55-60%) dacite that is over 40 m thick in this area. The base of the Pujsa has not yet been found. The unit is less indurated and less matrix supported than the other ignimbrites in the canyon. It contains large (~20 m) crystal-rich pumices that are welded to the matrix and are often found in concentrated lenses near the tops of the flows. The matrix contains plagioclase, quartz, biotite and hornblende crystals. The Pujsa sits above the basement, which explains the abundant angular lithic clasts of basement lithologies. Lithics of ignimbrite material are also apparent, which may be from older ignimbrites that are not exposed. The Pujsa ignimbrite may represent an early eruption from the La Pacana caldera.