Recharged from our stay in San Pedro de Atacama, we headed east toward the Purico complex. With Dr. Schmitt navigating we found our way to the Corrale Blancos outcrop. The Corrales Blancos outcrop is a large exposure of the Lower Purico ignimbrites. This may have been the most dangerous location of the trip due to potentially live land mines that have been transported down the wash. The lower Purico ignimbrite has been divided into two sections that will be discussed separately in the following paragraphs.

Figure from Schmitt et al. (2001). Note that only section A is exposed at Corrales Blancos. 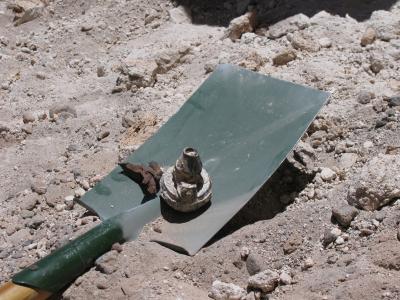 Image of previously retired land mine. 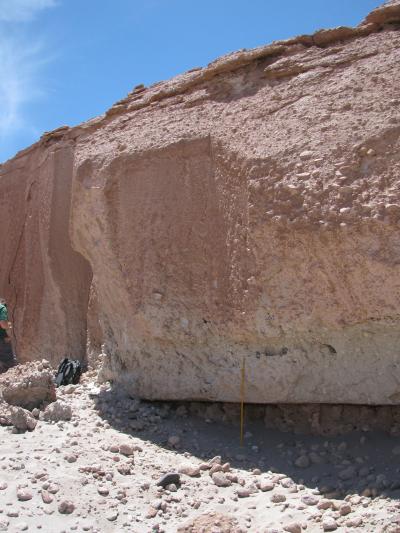 LPII displays greater compositional variability than LPI due to increased proportions of mafic material. LPII contains crystal-rich dacite pumice, a yellow pumice, crystal-rich inclusions, banded pumice, andesitic pumice, and rhyolite pumice. The base of LPII differs from LPI physically due to the presence of pyroclasic surge deposits and a crystal-poor rhyolite fall deposit.

Geochemical studies of the LPII ignimbrite show that the rhyolite fall deposit can not be explained as a fractionation product of the crystal-rich dacite, but instead appears genetically related to the andesitic pumice (Schmitt et al., 2001). The dacite pumice and crystal-rich inclusions are indistinguishable from those in LPI, see LPI for modes. The rhyolite pumice at the base of LPII is crystal-poor with the only significant crystals being plagioclase (some hornblende and biotite may also be present in trace amounts). Detailed geochemical analyses show that rhyolite is not a fractionation product of the dacite, but instead a liquid fractionated from the andesite (Schmitt et al., 2001; Grove and Nolin, 1986). The andesitic pumice in LPII contains plagioclase, clinopyroxene, and orthopyroxene in a glassy groundmass. Groundmass in the andesite pumice is ~50% less vesicular than the dacite pumice (Schmitt et al., 2001). 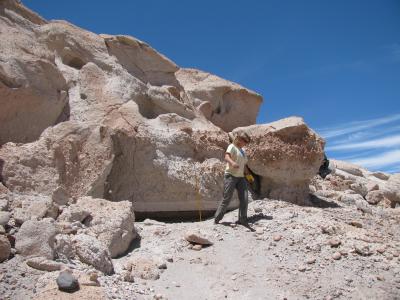 Image of LPII. Note the plinian fall deposit at the bottom of the section. 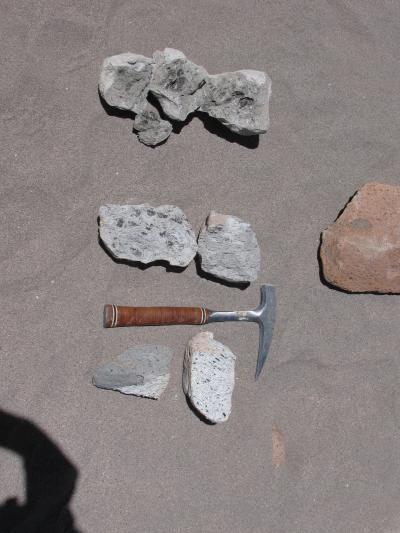 Image of different populations of pumice collected at Corrales Blancos.

Although the upper Purico ignimbrite (UPI) doesn't crop out here, it's an opportune time to discuss the differences between the lower and upper flow units. The UPI is white, well to moderately sorted ignimbrite containing both flattened white pumice and fiamme in a glass and crystal-rich groundmass. The UPI is easily distinguishable from the lower Purico ignimbrites by the fact that it's welded and contains fiamme.