Venus has more volcanoes than any other planet in the solar system. Over 1600 major volcanoes or volcanic features are known (see map), and there are many, many more smaller volcanoes. (No one has yet counted them all, but the total number may be over 100,000 or even over 1,000,000). These volcanoes come in a variety of forms. Most are either Large Shields or Smaller Shield volcanoes, but there are also many Complex Features, several Unusual Constructs, and a few Large Flow Features. None is known to be active at present, but our data is very limited. Thus, while most of these volcanoes are probably long dead, a few may still be active. 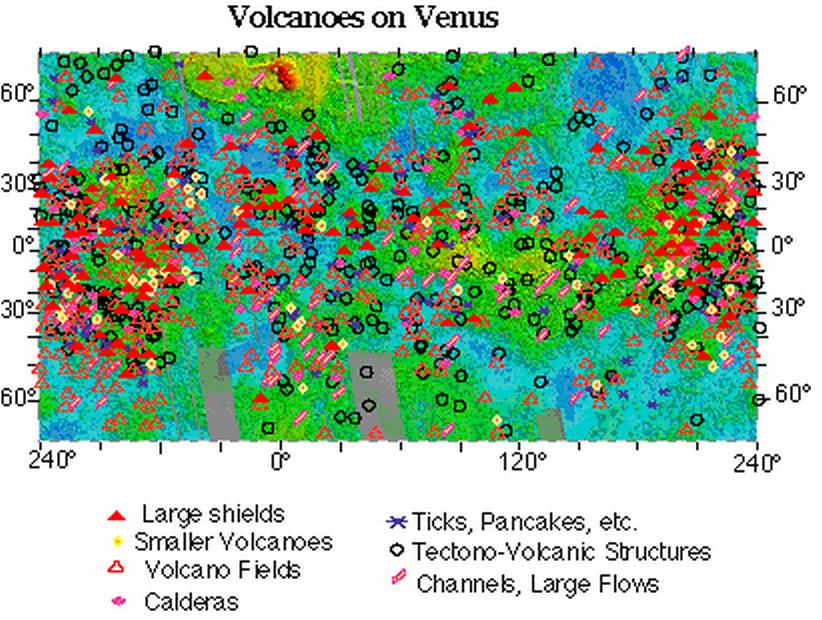 Venus is like the Earth in many ways. It is nearly the same size and it has a similar bulk composition. Of all the planets, its orbit around the sun is the closest to EarthUs orbit. It has both clouds and a thick atmosphere. Like the Earth, it even has a fairly young surface age (~500 million years). Despite these basic similarities, however, Venus differs greatly from the Earth in detail.

First, since the atmosphere is mostly CO2, Venus has an extreme Greenhouse Effect. In fact, the surface temperature on Venus is about 470!C (about 880!F). Further, the surface air pressure on Venus is about 90 times greater than that at sealevel on Earth. This is roughly equivalent to the WATER pressure on Earth one kilometer beneath the oceanUs surface. These surface conditions have two effects. (1) There is no water on the surface of Venus. Indeed, there is almost no water in the air, either. The clouds are mostly made of sulfuric acid and they are much, much higher than most clouds on the Earth. (2) Due to the high atmospheric pressure, the winds on Venus are also relatively slow. Thus, neither wind nor rain can really affect the surface on Venus. As a result, volcanic features will look freshly formed for a long time.

Second, Venus shows no evidence for plate tectonics. There are no long, linear volcano chains. There are no clear subduction zones. Although rifts are common, none look like the mid-ocean ridges on Earth. Also, continent-like regions are rare, and show none of the jigsaw fits seen on Earth. Thus, where volcanism on Earth mostly marks plate boundaries and plate movements, volcanism on Venus is much more regional and much less organized.

Third, volcanism on Venus shows fewer eruptive styles than on the Earth. Almost all volcanism on Venus seems to involve fluid lava flows. There is no sign of explosive, ash-forming eruptions on Venus, and little evidence for the eruption of sludgy, viscous lavas. This may reflect a combination of several effects. First, due to the high air pressure, venusian lavas need much higher gas contents than Earth lavas to erupt explosively. Second, the main gas driving lava explosions on Earth is water, which is in very short supply on Venus. Lastly, many viscous lavas and explosive eruptions on Earth occur near plate subduction zones. Thus, the lack of subduction zones should also reduce the likelihood of such eruptions on Venus.