Most volcanoes on Venus are shields, but a few are not. These volcanoes all formed from very thick, viscous lavas, and they fall into three types. First are the so-called "pancake" domes. Second are a related class of "tick-like" structures. And third are a few volcanoes with thick, fan-shaped or banded flows. Since most basalt lavas are very fluid and fairly thin, these volcanoes do not seem to be made from basalt. Rather, they may mark quartz-rich or granitic lavas. Still, there are theories that gas-rich, "frothy" basalts could produce such viscous lavas. Also, few of these features lie in or near the Venusian highlands. Thus, these three volcano types may differ greatly from the volcanoes seen on Earth's continents. 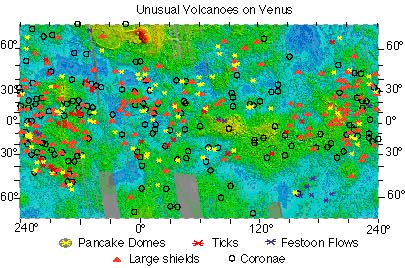 Finally, fan-shaped and banded flows are quite rare. They are shown on this map in purple, and most are located in one part of the southern lowland plains. Neither their setting nor their distribution shows any clear trends, so little is known about these flows. Still, they look a lot like the most viscous lava flows on Earth. Thus, they may not have formed from basalt lavas. Instead, they may mark a rare set of granitic or rhyolitic lavas on Venus. 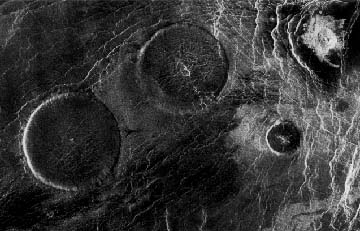 This image shows three of the venusian pancake domes. They lie near the equator on the edge of Eistla Regio. The two larger domes are roughly 65 km (40 miles) wide, and the smaller dome is about 22 km (13 miles) wide. All three are very low, rising less than 1 km above the surrounding plains. The tops are fairly flat to slightly bowl-shaped, and they show clear patterns of small cracks and faults. Most of these cracks probably formed with the dome, but some may have formed later with the faults in the surrounding plains. Note how some features extend from plains onto the edges of the central and right hand domes (arrows).

Each dome also shows a small central pit. These pits look like the central vents found on shield volcanoes, but they seem to have formed after their respective domes. Thus, there is no sign that the central pits fed lava flows to the dome. Rather, the domes seem to have formed from one large, slow eruption of viscous lava. After the eruption, the central pits then formed on the dome as gasses escaped from the magma or as the dome cooled and shrank. (Magellan Press Release Image P-38388, JPL image MGN 53.) 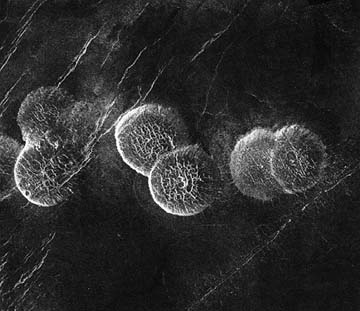 This image shows a chain of pancake domes east of Alpha Regio. Each dome is roughly 25 km (15 miles) wide, and the highest are about 750 m tall. As in Eistla Regio, most of these domes show a (very) small central pit. Here, however, we see a variety of crack patterns on the domes. These probably mark small changes in the speed or conditions of eruption. Many of the domes here also overlap. Such overlaps are quite common, and most seem to mark a series of dome eruptions. In some cases, however, they may mark two domes that formed at the same time. (Magellan Press Release Image P-37125). 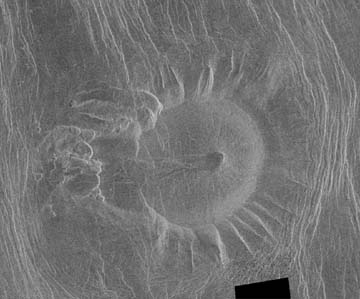 This feature is called the "Tick" for obvious reasons. It lies near the edge of Eistla Regio and is roughly 66 km (41 miles) across. The central round "body," however, is only about 35 km (22 miles) wide. Like the pancake domes, the ticks are broad, mostly flat features, and they often have a central pit or vent structure. The difference is that the ticks are surrounded by an array of short, radial ridges. In this case, the "head" of the tick is defined by a set of small collapse pits.

The origin of the "leg" ridges is unknown, but two options have been suggested. First, the ridges may outline avalanche scars. In this case, the tick is simply an old pancake dome with a heavily eroded rim. The second option is that the ridges mark dikes running out from the central "body." Still, it is not clear why these dikes formed ridges and not lava flows. Thus, some rim erosion may also be needed to expose the dikes in this theory. (Part of Magellan FMIDR 20S003, centered near 18.5S, 6E.) 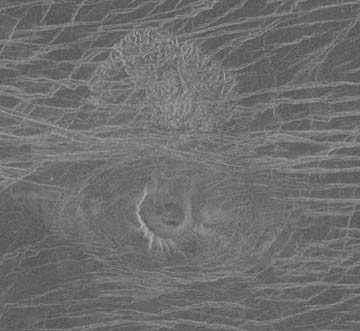 This image shows another "tick" south of Aphrodite Terra. It is about 12 km wide, and it lies in a region of deformed plains lavas. Note the fractures which arc around this tick to form an eyelike feature. Since this feature is about 44 km long by 33 km wide, it suggests that tick formation may affect a fairly broad region. Also note the crinkled region above the eye in this image. This seems to be a lava flow that came out of the tick before the latest stage of local faulting. (Part of Magellan C1MIDR 30S189, centered near 29.5S, 184E.) 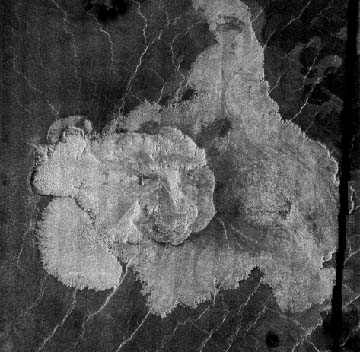 This strange volcano lies in Aino Planitia. Its central dome is roughly 100 km across, but it is only about 1 km high. Around the dome are several thick, fan-shaped lava flows and a much larger flow with a banded surface. These flows strongly suggest the eruption of very viscous lavas. First, the fan-shaped flow lobes are very thick. The measured flow heights vary between 120 and 540 m (~400 to 1700 feet). Second, the shape of these flows suggests that the lavas had a hard time flowing away from the volcano. Third, while the larger flow is much thinner, it looks a lot like the banded flows produced by viscous lavas on Earth.

Viscous lavas on Earth are rarely basalts. Hence, this volcano may mark a rare case of non-basaltic lavas on Venus. Such lavas need a lot of water to form, however, while water is scarce on Venus. Further, basalts can also form viscous lava flows in some cases. Thus, it is not yet clear what the nature of these lavas was. (Magellan Press Release Image P-39916, JPL image MGN-93).