Venus has over 150 large shield volcanoes. These shields are mostly between 100 and 600 km across, with heights between about 0.3 and 5.0 km. The largest shields, however, are over 700 km in diameter and up to 5.5 km in height. For reference, Mauna Loa is ~120 km across at its base, and it has a total height of ~8 km (from the sea floor). Thus, the large Venusian shields are broader, but much flatter then the largest shield volcanoes on Earth. Indeed, the largest shield volcanoes on Venus cover nearly the same area as Olympus Mons, which has a basal diameter of ~800 km. (Note, Olympus Mons is still much bigger than the Venusian shields due to its immense height.)

These large shields all look much like shield volcanoes on Earth. They are mostly covered by long, radial lava flows. They all have very gentle slopes. And most also have some form of central vent or summit caldera. Thus, we think that these shields forme d from basalts, much like the shield volcanoes in Hawaii. The venusian shields, however, show a map pattern which is quite different from that seen on Earth (see reference map). Namely, the shields on Venus are widely scattered, and they show no linear vo lcano chains like those on Earth. This suggests that Venus does not have active plate tectonics, and also that most volcanism on Venus is related to mantle hotspots.

This map shows the distribution of large shield volcanoes on Venus. Each red triangle marks the site of a shield volcano over 100 km in size. The background shows local surface heights across the planet. Blues denote smooth lowland plains. Greens mark reg ions 1-2 km higher than average for the planet. Reds and yellows show highlands over 3-4 km higher than the rest of the planet.

Very few large volcanoes are in the lowland plains or in the few highland regions. Rather, most of the large shields lie in the green to light yellow regions. Also note how the volcanoes are clustered into left and right sides of the map (dotted lines). T hese regions contain 2 to 4 times more volcanoes (for their size) than the planet as a whole. The reason for this grouping is not fully known, but it may reflect a cluster of closely spaced hotspots in a region of marked crustal failure. This region conta ins a large network of crisscrossing rifts and major fault zones. (Volcano distribution from data of Head et al. (1992); base map shows cycle 1, 2, 3 Magellan topography data. 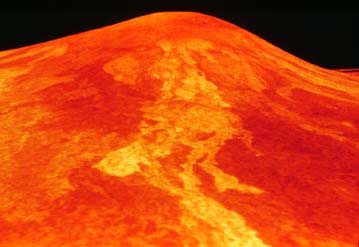 This is a perspective view of the volcano Sif Mons. This volcano is about 2 km high and nearly 300 km across. It lies near the equator and is in a region called Western Eistla Regio. Note: Heights in this image are exaggerated to make the volcano stand ou t, but Sif still shows a very flat profile. This is true for most volcanoes on Venus. Also note the bright lava flows coming to the front of the image. These flows are probably very rough and blocky like aa lavas on Earth. They also are roughly 120 km lon g. To flow so far on such gentle slope suggests that these lavas were also very fluid. (Magellan Press Release Image P-37342.) 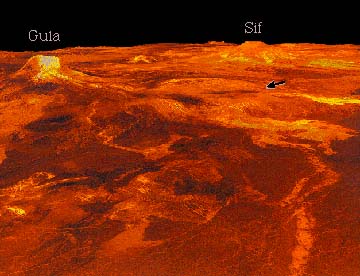 This is a perspective image of Western Eistla Regio showing two large shield volcanoes. Gula Mons is on the left, and is the largest of these shields. It is ~3.2 km high, and about 400 km across on its biggest side. Sif Mons lies in the distance on the right, and is only slightly smaller. Western Eistla Regio itself is broad dome nearly 1.5 km high and over 2000 kmwide. Similar domes are found near hotspots on Earth, and are believed to be lifted by a plume of hot rising mantle rocks. Thus, Sif and Gula seem to be hotspot volcanoes like those in Hawaii.

Where Hawaii is part of a long chain of volcanoes, however, Sif and Gula are far away from each other (over 700 km). They are also far from the nearest other shields. Gula formed at the crossing of two major rift zones, and Sif Mons may also lie on a simi lar rift. Thus, since many other large shield volcanoes also lie near large rift zones, hotspot magmas may need large crustal faults to build big volcanoes on Venus.

The arrow points to a large corona (link to Other Structures) north of Gula Mons. This flat-topped feature is 225 km across and about 600 m high. A few lava flows are seen coming from its nearer edge. (Magellan Press Release Image P-38724, JPL image MGN-7 2.) 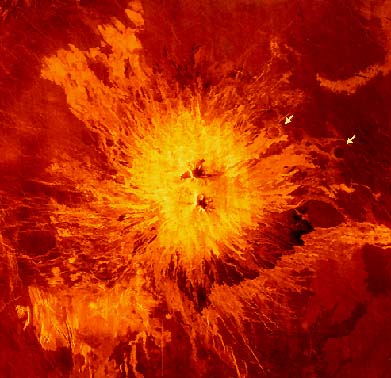 This colorized image shows the volcano Sapas Mons. Sapas lies near the equator in Atla Regio, and is nearly 180km away from Sif and Gula Mons. Sapas is 1.5 km high and is about 120 km across. It is located on the edge of broad regional dome 1000 km across and up to 3 km high. Unlike many large shields on Venus, Sapas does not lie on a major rift structure, but it does still bury a set of NW-SE trending faults. In the upper right, lava flows also clearly embay two impact craters on the edge of the shield (a rows). Sapas shows many narrow lava flows with a range of brightnesses. Radar is brightest over rough, blocky surfaces; thus, this range of color suggests a change in volcanism over time. Namely, the youngest lavas are fairly bright, but the older lavas seem to be much smoother, especially in the band of dark lavas along the lower right edge of the volcano. (Magellan Press Release Image P-38360, JPL image MGN-51.) 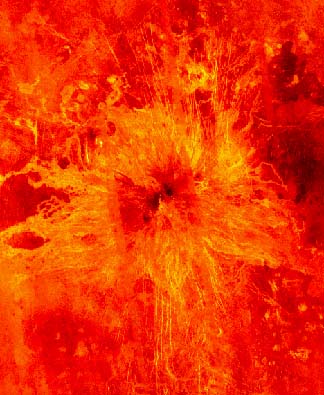 Ushas Mons lies in the southern hemisphere on the northern part of Dione Regio. It is on the edge of several lowland plains regions, but it also is on a broad, low rise attributed to a mantle hotspot. Ushas is over 500 km across, and is about 2 km high. L ike Sapas, it shows a number of bright, rough lava flows, but it has smooth dark summit region. It is surrounded by volcanic plains with many small shields (especially in the upper left and lower right). Also note the clear north-south faults running unde r the volcano. These seem to have formed with the volcano, and may contain volcanic dikes. (Magellan Press Release Image P-42386, JPL image MGN-117.) 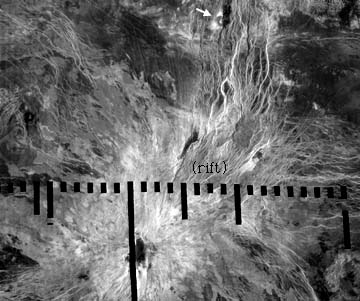 Theia Mons is the largest volcano on Venus. It is located in Beta Regio, and is shown here in the bottom center. Theia is over 4 km high, and its lava flows cover an area more than 800 km wide. It has an oval central caldera roughly 75 km long and 50 km w ide. The volcano also lies at the junction of 3 major rifts, one of which is seen here running off the top of the image. This rift, Devana Chasma, is over 200 km wide, but it narrows down to ~50 km as it climbs Theia Mons. It is up to 3 km deep on the fla nks of the volcano, and apparently formed throughout the growth of Theia Mons. Also note the crater in the top center (arrow). This crater has been cut by the edge of the rift, and so suggests a fairly young age of faulting.

‹ Venus up Small Shields on Venus ›