Small shield volcanoes are very common on Venus. In fact, there may be over 100,000 of such shields less than 20 km across. These small shields usually occur in clusters, called shield fields. Over 550 shiled fields have been mapped (see Reference Map), and most of these are between 100 and 200 km across (nearly the same size as the state of Rhode Island). The shield fields are widely scattered on Venus, but they mostly occur in the lowland plains and lower upland regions. Very few are found at higher elevations or in the chaotic tessera.Many have also been partly buried by later lava plains. Thus, the shield fields seem to be fairly old, and they may have formed during the earliest stages of plains volcanism.

At slightly larger sizes, true shield volcanoes are rare. Of the 270 volcanoes between 20 and 100 km in size, only about 70 seem to be real shields. The rest are unusual features that may reflect different lava types. Most of the shields are also fairly small, less than 30-40 km across, and 25 of them show an unusual, petal-like set of bright lava flows (see images). Thus, there seem to be two distinct scales of volcanism on Venus: large and very small. These two scales may reflect differences in the nature or volume of mantle melting beneath the volcanoes.

This map also shows two clear patterns of volcanism. (1) Very few of the smaller volcanoes lie at high elevations (light green to yellow). Rather, they mostly lie at lower elevations which are colored blue and dark green. (2) Many of the shield fields also seem to cluster around larger shield volcanoes. This may reflect a concentration of volcanic activity in these regions. However, the lack of shield fields in at least some regions may simply mark their burial by thick lava plains. (Data from Head et al, (1992) J. Geophys. Res. vol. 98, p. 13,153; base map of Magellan Topogaphy from NASA JPL .) 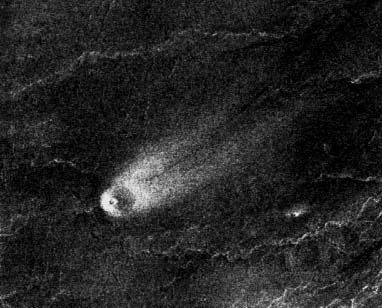 Single small shield volcano on Venus. This volcano is located in a region of fairly smooth lava plains. Note the clear summit pit/caldera, and the steep-sided cone. Differences in slope angle and the off-centered summit pit are mostly due to foreshortening in the radar data. The bright tail to the right of the shield is probably not volcanic. Rather, this tail marks a rare windstreak left by surface winds blowing around and over the volcanic shield (Magellan Press Release Image P-38810).

An example of an "Anemone" shield. It lies in southern Atla Regio, and is nearly 40 km across. The name comes from the narrow, radar bright lava flows ringing the volcano. In this example, these flows are buried by a smoother, central unit which contains a central caldera. Outside the volcano, several other bright lava flows are also seen. These flows are part of a broader volcanic complex, but they help to show off and enhance the features of this volcano. (Part of Magellan F-MIDR 10S200, centered on ~9.5S, 201E) 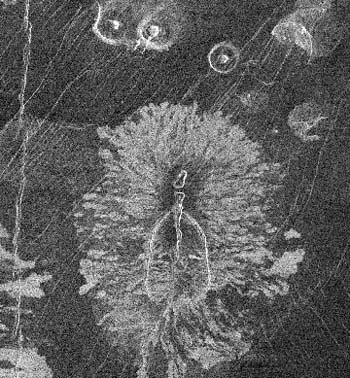 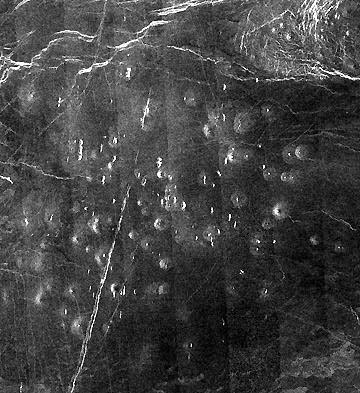 This image shows a typical shield field on Venus. It is about 120 km across, and it contains 51 clear shields of varying heights. There are also ~31 pits that may mark additional vents within the field. Note that the shields show no relation to the older faults in this region, while the pits seem to line up with a large graben (arrows) crossing the field. This suggests that the faults may have partially influenced the type and location of eruptions within the field. For reference, this shield field is located in Ulfrun Regio, about 3000 km east of Sapas Mons. (Part of Magellan C1-MIDR 30N225.) 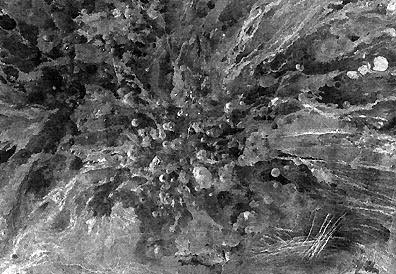 This image shows a shield field at the center of a larger set of lava flows. These shields range from ~1 to ~8 km in size, and most occur in a cluster ~80 km across. Some shields occur up to 60 km outside of this cluster, however, while the lava flows extend up to 200 km from the central shield field. Since each small shield is much smaller than any of the lava flows, this shield field must indicate a change in volcanism over time. Most likely, the lava flows formed quickly during an early phase with lots of lava, and the shields then formed later when the magma supply was almost gone. (Part of Magellan C1-MIDR 15N317, centered at 13.5N, 314.5E.) 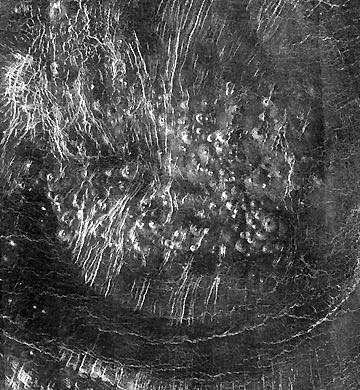 This image shows a shield field inside a corona structure. This field is roughly 125 km across, and it is surrounded by a set of younger lava plains. Note the dark unit which buries both fractures and shields in the lower left. In this case, the shield field may have formed as the first magmas slowly came up inside the corona, while the plains would have formed later during a more vigorous phase of volcanism. (Part of Magellan C1-MIDR 30N135, centered at 27.5 N, 136.5E.)