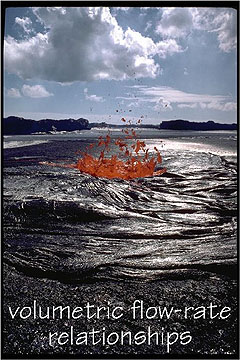 All lava flows pass through a range of viscosities as they cool and solidify. Therefore you can't say that forms when the viscosity is low and forms when the viscosity is high. If that were the case you would never find any solidified pahoehoe because it has to go through high viscosities on its way to solidifying. The important factor is whether or not the lava is still moving at the time that it has developed the high viscosity (Peterson & Tilling 1980). This helps to explain why a pahoehoe flow sometimes becomes when it flows down a steep slope: If it has cooled to the point that it can no longer deform fluidly, it will instead break or be pulled apart into spiny clinkers. A sustained volumetric flow rate above ~10 cubic meters per second will cause almost any Hawaiian lava to form 'a'a so that if you find an 'a'a flow you can be pretty sure that it was emplaced at a high volumetric flow rate. A pahoehoe flow, on the other hand, tells you that the eruption took place at a low volumetric flow rate.

Volumetric flow rates can in turn usually be associated with discharge rates at the vent, and thus these two flow types can provide a great deal of information about eruptive conditions even if nobody was around to record the eruption.

Below:  Map showing most of the large 'a'a and pahoehoe flows on Hawai'i. This information can be used to attempt to understand the plumbing of the rift zones as well as to characterize volcanic hazards (From Rowland & Walker 1990).

For example, long-duration tube-fed pahoehoe eruptions require a mechanically open pathway for magma to travel from the magma chamber. This is because the flow rate through the underground conduits is so low that magma pressure alone is unable to hold open the conduit. Such a mechanically strong conduit can last for long periods of time (years). During these eruptions, summit tilt (which is an indirect indication of magma chamber inflation or deflation) often shows no consistent inflation or deflation. The suggestion is that an open pathway has been established from the magma source (the mantle?) all the way to the vent.

Because the discharge rates of almost all tube-fed pahoehoe eruptions on both and Mauna Loa seem to have been between 2 and 5 cubic meters per second, this has been proposed to be the supply rate to each volcano from the mantle (Swanson 1972; Dzurisin et al. 1984; Rowland & Walker 1990). You may recall from the beginning of this review that dividing the total volume of Mauna Loa by its estimated age yields essentially the same value. This would imply that all magma supplied from the mantle is erupted onto the surface; this is definitely not the case. When the volume of lava erupted onto the surface at Mauna Loa since the arrival of westerners (1778) is divided by the time since 1778, the rate is only 1 cubic meter per second, and a similar calculation for Kilauea yields a value of only 0.2 cubic meter/sec.

These values are 3 and 15 times smaller than the proposed supply rate of about 3 meters per second. These relationships point out the pitfalls of looking only at the surfaces of volcanoes for short periods of their lives, and suggest that the ratio of intruded:erupted magma is high at both Mauna Loa and Kilauea.