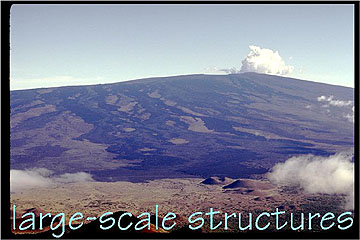 In general, Hawaiian volcanoes during their most-active tholeiite shield stage can be characterized as having gentle slopes extending from the sea floor up to a summit caldera. The submarine slopes of Hawaiian volcanoes are steeper than the subaerial slopes but even they rarely exceed 14º (Mark & Moore 1987). In the alkalic stage the caldera is usually filled in and as noted earlier the slopes become steeper.

The greater proportion of explosive activity provides a good deal of ash causing Hawaiian volcanoes in their post-shield alkalic stage to resemble strato volcanoes to some degree. The most prominent large-scale structures are calderas and rift zones.