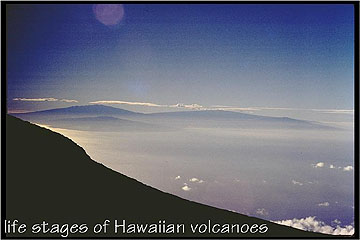 Hawaiian volcanoes go through "life stages" during their development (e.g. Macdonald et al. 1983; Peterson & Moore 1987), and these can be related to their relative relationships to the Hawaiian hotspot.

The diagrams below show the life stages of a Hawaiian volcano. Note that because of subsidence about half of the volume of the volcano is below the level of the ocean floor. Within the main SE Hawaiian chain, Lo'ihi is in stage 2. Kilauea is a young stage 4 and Mauna Loa is a mature stage 4. Hualalai and Mauna Kea are both in stage 5. Kohala is in stage 6. Moving to Maui, East Maui is in stage 7 whereas West Maui is between stages 7 and 8. East Moloka'i is also between stages 7 and 8. Lana'i (which skipped stage 5), Kaho'olawe, and West Moloka'i are in stage 6, perhaps never to go through stage 7. On O'ahu, Ko'olau is in (still in?) stage 7 (but also skipped stage 5), and Wai'anae is probably between stages 7 and 8. Kaua'i and Ni'ihau are between stages 7 and 8. As you can see, even though a lot of work has gone into figuring out this sequence, the volcanoes themselves have a good deal of variation and haven't perfectly "followed" the sequence. The diagram is adapted from Peterson & Moore (1987).