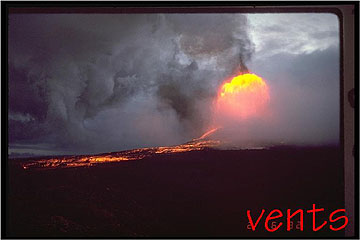 Vents, of course, are the locations from which lava flows and pyroclastic material are erupted. Their forms and orientations can be used to determine many characteristics of the eruption with which they were associated. There are two main endmembers in a spectrum of pyroclastic vents in Hawai'i, spatter vents and cinder cones. Their differences are due mostly to the gas content of the magma that is erupted. Additionally, there are satellitic shields formed during eruptions without fountaining and tuff cones formed during phreatomagmatic eruptions.

As a dike approaches the surface, it generates a zone of tension at the surface. This tension is usually manifested as a pair of cracks with the ground with the area in between often lower than the surrounding elevation (see below). The first phase of a Hawaiian eruption is usually characterized by breaking to the surface of a dike along one of the two fractures resulting in a line of erupting vents commonly called a "curtain of fire" (e.g. Macdonald 1972). After a few hours or few days most parts of the fissure stop erupting and activity is concentrated at one or more separate vents (e.g. Bruce & Huppert 1989). It is these vent locations that usually persist long enough (hours to weeks and sometimes years) to produce significant near-vent constructs. The change from long continuous erupting fissures to one or a few vents must be remembered when mapping eruptive fissures in remote sensing data and relating them to dike dimensions: The near-surface part of the dike is almost certainly longer than any line of near-vent constructs (see discussion in Munro 1992). 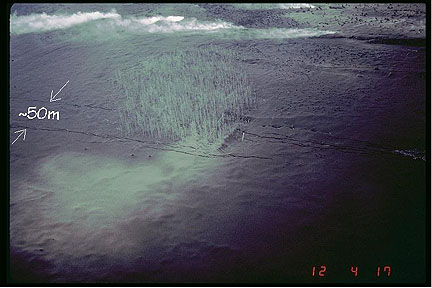 Fissures opened in the cinder-covered surface uprift from Pu'u 'O'o in July of 1985. Note that there are two parallel fractures about 50 m apart and forming a small graben. The next morning lava erupted out of the nearest fissure.

The ground surface here is covered by a ~2 m-thick layer of Pu'u 'O'o scoria, and this helped to accentuate the cracks - similar to the way that a small hole dug into sand at the beach will eventually look quite large as sand slumps into the hole.

In the case shown here the actual cracks in the rock under the scoria were only about 10-20 cm wide but so much scoria fell into them that they were wide enough to barely be jumpable.