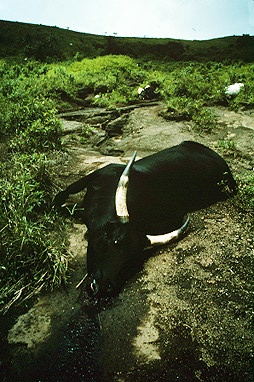 At certain concentrations some volcanic gases can be fatal. In historic time, deaths have been caused by sulfur dioxide, carbon dioxide, and carbonic acid and hydrogen sulfide. The following information is compiled from Volcanoes of the World by Simkin and Siebert (1994), and the Bulletin of the Global Volcanism Program.

The 1650 eruption of Etna caused about 40 deaths; some caused by opthalmias from sulfurous vapors and suffocation. The crew of a ship suffocated as it passed the volcano.

In August, 1984, 37 people were killed when carbon dioxide was released from Lake Monoun.

In August, 1986, 1,700 people were killed when a large amount of carbon dioxide was released from Lake Nyos. At least 300 people were hospitalized.

Karthala is a shield volcano with 30 historic eruptions. In 1903, 17 people died from suffocating gases. They were near solfataras at 1,600 m.

In June of 1990, three people died of suffocation at Rabaul in a vent of the east side of Tavurvur. Three more people died trying to retrieve the bodies.

Tangkubanparahu is a stratovolcano with at least 16 historic eruptions. In June of 1923, three boys were killed by asphyxiating gas. Carbonic acid and hydrogen sulfide were involved. The volcano was not erupting.

Papandayan is a stratovolcano with three historic eruptions. In December of 1924, a volcanological observer died, probably by suffocation due to hydrogen sulfide.

The Dieng Plateau, a complex volcano, has had at least 16 historic eruptions. In February of 1979, at least 149 people died from poisonous gas(es) (either crbon dioxide or carbon dioxide and hydrogen sulfide) as they fled eruptions at Sinila and Sigludung Craters.

Hakone, a complex volcano, has not erupted in 1,000 years. In May of 1933, one person was killed in association with fumarolic activity.

In December, 1997, two men died when sulfur dioxide concentrations reached ~5 to ~8 ppm. Since 1980, 71 people have been hospitalized due to inhalation of volcanic gases at Aso. Seven of these people died. Tseax River Cone, British Columbia, Canada

The Tseax River Cone, a pyroclastic cone, erupted in 1325 and 1730 AD. During the 1730 eruption lava overran a village. Several people dug pits for shelter but died due to "poison smoke."

Santa Maria is a stratovolcano. In October of 1902, an eruption killed about 1,500 people. At least 350 people in one village died from deadly fumes.

Los Carran Venados has had three historic eruptions: Rininahue maar in 1907, Carran maar in 1955, and Mirador in 1979. Two people were killed by gases during the 1955 eruption.

During the 1973 eruption near Vestmannaeyjar a sleeping man was killed by carbon dioxide as it pooled in the basement of his house.

La Palma is a stratovolcano with seven historic eruptions. Two eruptions caused fatalities. In 1677, one man and many animals were killed by gas.

Volcanic gases in Hawaii are not fatal but vog (volcanic smog) may degrade lung function and compromise peoples immune systems, especially in children, individuals with chronic asthma or other respiratory impairments, or people with circulatory problems.

‹ Man Versus the Volcano up Case Studies ›