The Origin of the Atmosphere

The Origin of the Atmosphere 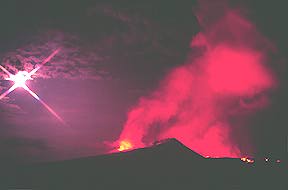 Two models are most favored for the origin of the atmosphere: outgassing or accretion. Outgassing is related to the differentiation of the Earth and the release of gases by volcanoes. Assuming that the gases we presently observe were also released by early volcanoes the atmosphere would be made of water vapor (H2O), carbon monoxide (CO), carbon dioxide (CO2), hydrochloric acid (HCl), methane (CH4), ammonia (NH3), nitrogen (N2), & sulfur gases.

The atmosphere was reducing (no free oxygen).

The present-day atmosphere is quite different:

Early in Earth history, water vapor formed clouds, rain, and ultimately all of the surface water (oceans, ground water, lakes, rivers, glaciers). The presence of the ancient oceans and lakes is recorded by different types of sedimentary rocks.

Perhaps the best geologic evidence for the composition of the early atmosphere is the presence and abundance of Banded Iron Formations. These rocks are made of layers of sulfide minerals (evidence for a reducing environment) and chert or fine-grained quartz. These rocks are not present in rocks younger than 1.8 - 2.5 billions of years ago, when oxygen starting becoming more abundant.

The amount of carbon dioxide was reduced by chemical weathering of minerals at the surface:

The amount of oxygen increased due to early life forms, like the algae in stromatolites.

The introduction of red beds, sedimentary rocks with ferric oxide (hematite) cement, to the rock record indicates the addition of free oxygen to the atmosphere.