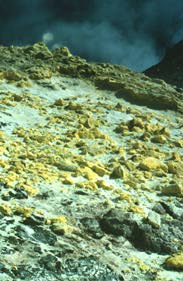 Mercury is released by most volcanoes and has been measured at Kilauea, Mauna Loa, Hekla, Erebus, at Mount St. Helens (Siegel and Siegel, 1987). Kilauea produces about 270 tons of mercury each year and has been identified as the source for mercury on Oahu, 320 km away.

Condensates, sublimates, and incrustations were studied at Merapi volcano by Symonds and others (1987). The following elements were found:

Gold has condensed from volcanic gases. Meeker and others (1991) reported gold at Mount Erebus, Antarctica. They found gold in the plume near the crater, in the air up to 1000 km from the volcano and in near surface samples.

Most of these gases originate in the mantle and are transported to the crust and surface by complex interactions with magma and rocks encountered along the way. In general, the gases are dissolved in the magma. At shallow depths, as pressure on the magma decreases, the gases leave the magma (exsolve). The gases can interact with surrounding rocks or continue to the surface.