Volcanic activity is the most powerful force in nature. Some volcanic eruptions are much more powerful than the largest nuclear explosion. Volcanoes have killed thousands of people and have created some of the most frightening events in human history.

Volcanoes have been the basis for myths and legends the world over.

Volcanoes are also responsible for much of the land we live on, 90% of all the continents and ocean basins are the product of volcanism. The air we breathe, and the water we drink have been produced by millions of years of eruptions of steam and other gases. 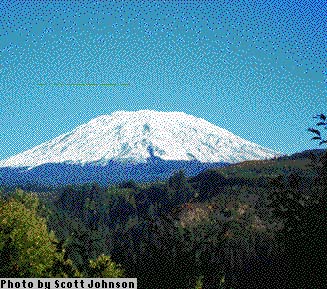 The volcanic mountain above is Mount Adams which is located in the Cascade Range of Washington.

Volcanoes are not alive but scientists use human terms to talk about volcanoes, such as active, alive, dormant, resting, sleeping, extinct, dead, lifetime, and restless.

The island in the middle of the picture is Vulcano. The island was formed by Vulcanian eruptions, which are eruptions of hot gas and steam followed by ejections of thick and pasty lava.

1. An opening in the crust of the Earth in which molten rock called magma and gases can escape to the surface.

2. The mountain that is formed from volcanic eruptions. 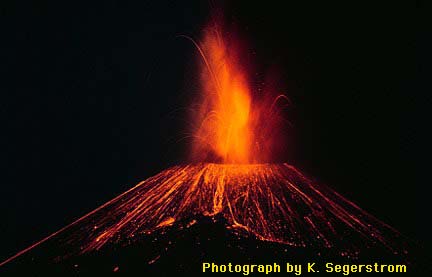 This is a photo of the volcano Paricutin (Pear-A-Koo-Teen). Paricutin's cone formed from nine years of almost constant eruptions. Red hot cinders exploded from the main vent and landed near it building the cone higher and higher. This type of cone is called a cinder cone. You will learn more about the types of volcanic cones in the eighth lesson, "Volcanic Cones and Eruptions". 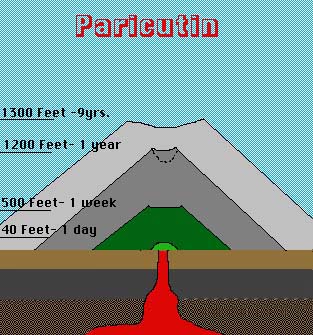 Volcanoes actually build themselves into a mountain with repeated eruptions. In 1943 a farmer in Mexico noticed that some cracks (fissures) in his corn field were growing wider and wider. The next day his field was engulfed by a growing volcanic cone (Light Green). During the week the cone grew 500 feet taller (Dark Green). Within a year (Dark Gray) Paricutin was over 1200 feet higher than the surrounding landscape. During the next eight years the volcano did not grow much taller but the cone's base grew wider and wider (Light gray). Paricutin stopped erupting in 1952 almost as fast as it started. The mountain has been silent since.

Volcanoes can build themselves into high mountains one day and in the case of Mt. St. Helens erupt violently blowing their top off the next day. Mt. St. Helens lost over 1300 feet of its summit during the eruption and simultaneous landslide of 1980.

The photo above is of beautiful Mt. St. Helens before it erupted on May 18, 1980. Mt. St. Helens was one of the most beautifully symetrical stratovolcanoes in the world. It was called "the Fuji of the west". Mount Fuji, in Japan, is the most photographed mountain in the world. The next card will show you what this mountain looked like shortly after the eruption. The lake in the foreground changed. The lake's level is now 150 feet higher because the landslide and eruption filled the bottom of the lake with rock, soil, and pyroclasts.

This is Mt. St. Helens four months after the eruption. Notice the loss of over 1300 feet of the summit. Also notice the total devastation of the beautiful forests and how Spirit Lake rose. Spirit Lake's surface was completely filled with trees that were blasted into the lake by the force of the eruption. The lake is now much more shallow, wider, and longer than before the eruption. Huge trees still float across the lake today. 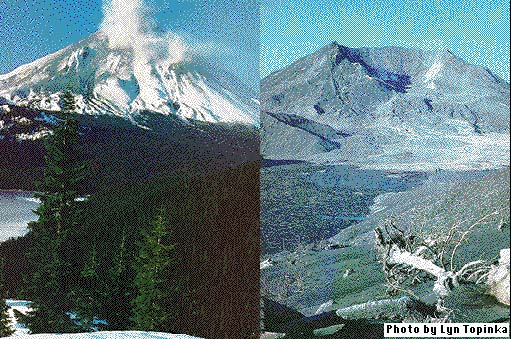 The eruption left a crater over a mile wide and over 2000 feet deep. The mountain is still active today spewing small whisps of steam. A lava dome is growing in the bottom of the huge crater.

A lava dome is a steep mass of very thick and pasty lava that is pushed up from the main vent. The lava is so viscous (thick and pasty) that it does not flow but slowly rises higher with each movement of magma in the conduit. Think of toothpaste that is slowly squeezed and then stopped and then squeezed again from the tube. This is how the lava dome in Mt. St. Helen's was formed.

The dome's exterior surface is very rough with chunks of lava that were formed from small eruptions that broke the cooled and hardened surface into blocks. 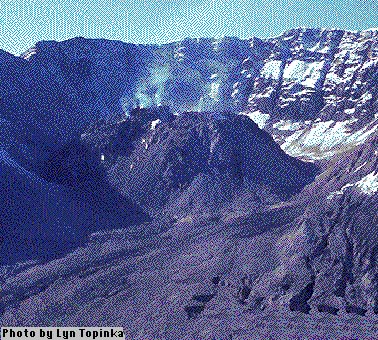 The dome slowly "grew" larger and larger over a seven year period. An earlier dome started to form one month after the famous eruption when very thick lava (dacitic lava) rose into the crater from the magma chamber below. This dome was destroyed by an explosive eruption just a month later.

The large dome that is very visible today is over 900 feet tall (taller than an 80 story building) and over 3000 feet wide (10 football fields). As large as the lava dome is, it is still dwarfed by the huge crater that was the result of the 1980 eruption. Steamy whisps of steam are still visible from the dome telling us that the volcano's magma is filling the conduit, making the volcano still active today. 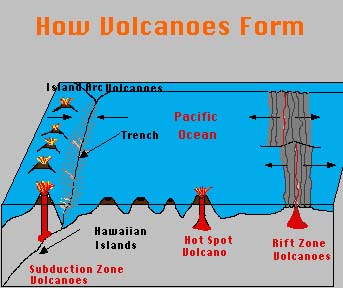 These mid-ocean or rift zone volcanoes are the world's longest continuous mountain chain. This mountain chain encircles the entire Earth. It is more than 40,000 miles long.

The third way that volcanoes form occurs at a Hot Spot. Hot spots are usually found under oceanic crust, but can be located under continental crust. You will learn more about Hot Spot volcanoes in the lesson "Hot Spots-Yellowstone and Hawaii".

The diagram above shows the three ways that volcanoes form.

Predicting exactly when a volcano will erupt is next to impossible. Today geologists are becoming much more accurate in making the public aware that a volcano is showing signs that it may erupt in the near future.

In the months before Mt. St. Helens erupted geologists knew the mountain was getting restless. A magnitude 4.1 earthquake was recorded on March 20 (about 2 months before the large eruption). Many shallow earthquakes were recorded over the next seven weeks. Magma moving higher and higher inside the mountain was causing these earthquakes. As the magma rose it formed a large bulge on the north flank. This bulge was growing daily and the geologists knew that an eruption was soon to be.

What the authorities did was evacutate most of the people in and near the mountain. Some decided to stay. Almost everyone that was near the eruption was instantly killed. In all, 57 people died. Without the evacuation perhaps as many as 30,000 deaths would have been attributed to Mt. St. Helens fury. 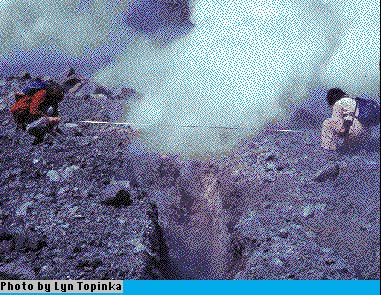 The geologists in the photo are measuring a growing fissure near the lava dome in Mt. St. Helens crater. As magma rises the fissure will grow wider telling the geologists that the magma is rising again.

Scientists can not stop a volcano from erupting but with constant monitoring they can warn and evacuate people and save lives.

Many volcanoes erupt in very consistant patterns, while other volcanoes have no eruption pattern at all. This makes forecasting eruptions difficult.

What makes predicting eruptions even more difficult is the fact that many volcanoes start with one type of eruption pattern and then change eruption patterns as they grow older.

Some of the most powerful eruptions in recorded time have come from volcanoes that have been dormant for hundreds and even thousands of years. 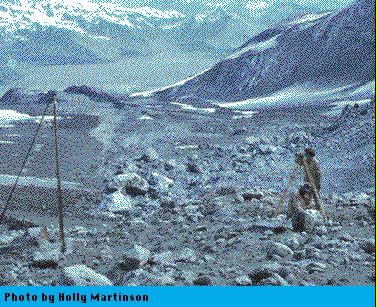 Here we have geologists studying a tilt meter. A tilt meter is used to measure the growth of the lavadome in the foreground. The tiltmeter will show a different angle as the dome grows. With careful study the geologists can tell if magma is on the rise and that an eruption may occur in the near future.

Write your answers to the following questions on a sheet of paper. Click on the Earth icon after you have finished to allow the next group to begin the lesson. You can click on page titles located directly under the questions to go back into the lesson to find the answers.

1. At what type of plate boundaries do volcanoes form?

2. What are the two definitions for the term volcano.

3. Write definitions in your own word for the following terms: