This lesson was adapted and modified from Dr. Stephen Mattox's, "A Guide to The Geology of Hawaii Volcanoes National Park".

Do you remember that there are three ways that volcanoes can form? They form at subduction zones, mid-ocean ridges and at something called a hot spot. In this lesson you will learn about what causes hot spots to produce volcanoes. 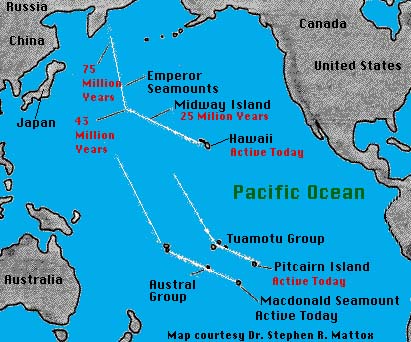 What do you notice about the lines of island groups in the Pacific Ocean?

A geologist in the 1960's, by the name of Tuzo Wilson, noticed that there were straight lines of submarine volcanoes and volcanic islands in the Pacific.

These linear chains of volcanoes ran in parallel lines to each other. (See white lines on the map)

The active volcanoes in these chains are all located in the southeast corner and are the last island in that group. 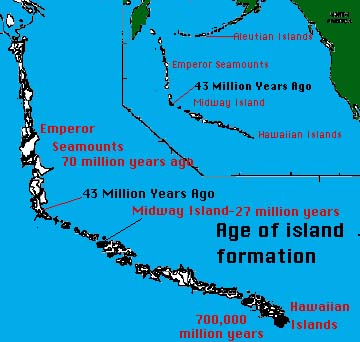 The oldest islands were the northern most islands in the group. Coincidence???

What Tuzo Wilson decided was that the Pacific plate was moving over three hot spots. The Hawaii-Emperor Seamounts, Tuamotu, and the Austral groups of islands each formed over a different hot spot.

About 43 million years ago the Pacific plate shifted its path to a more northwesterly direction. All the island groups changed course at the same time!!

He also concluded that all the islands in the Emperor Seamount- Hawaiian chain all formed over the same hot spot that is currently under the big island of Hawaii today. 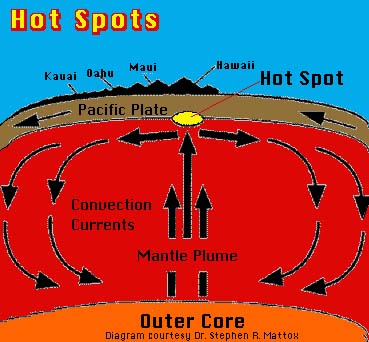 A hot spot occurs because of the intense heat of the outer core. This heat radiates through the mantle bringing hot solid rock upward to the hot spot. These areas of rising solid rock are called mantle plumes. Because of lower pressure in the upper region of the mantle the rock begins to melt. This forms magma which rises inch by inch until it reaches the surface forming a volcano.

In 1971 W. Jason Morgan added to the hot spot theory. When the rising solid rock (mantle plume) reaches the plates it splits and spreads horizontally. This split or flow causes the plates to drift.

Morgan proposed that there are 20 different hot spots in the world. Most hot spots are located at mid-ocean ridges, but there are a few located in the middle of plates, like Hawaii and Yellowstone. 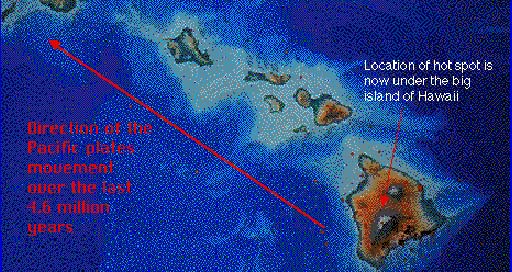 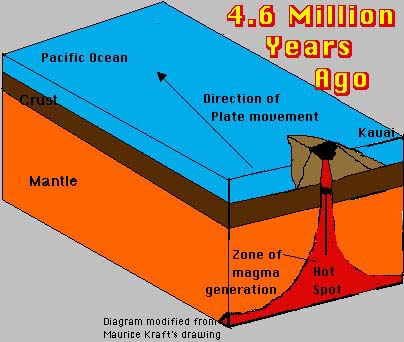 The first Hawaiian Island to form over the hot spot was Kauai. It began to break the surface of the Pacific Ocean about 4.6 million years ago. 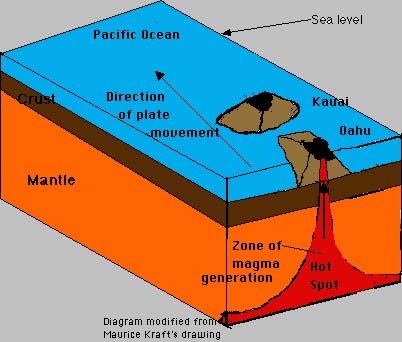 As the Pacific plate moved westward another island formed. That island was Oahu. The capital and largest city of Hawaii, Honolulu, is located on this extinct volcanic island. 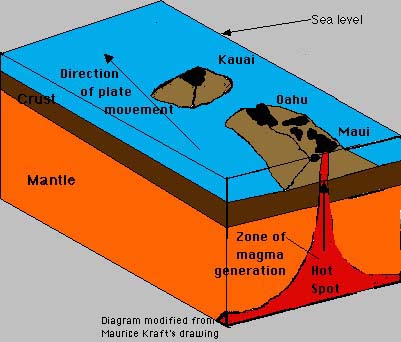 The islands of Oahu, Molokai, Lanai, and Maui share the same volcanic base. They all formed from separate volcanoes that were connected by huge lava flows. These volcanic islands also formed from the same hot spot. 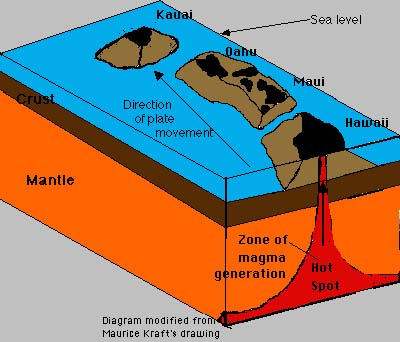 Today the Big Island of Hawaii sits over the hot spot and has the only active volcanoes in that island group. Konala, Hualaiai, Mauna Kea, Mauna Loa and Kilauea volcanoes have built the island over the last 500,000 years. Mauna Loa volcano is the largest volcano on Earth. It is over 30,000 feet tall from the seafloor where it was born to the summit, which is 13,684 feet above sea level. 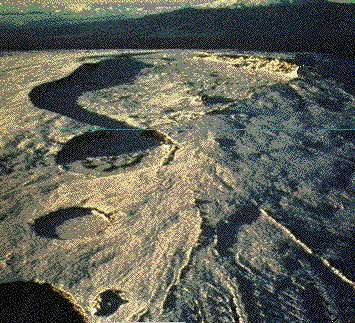 This is a caldera.

A caldera is a large bowl-shaped crater that is formed by the collapse of a volcanic cone after an eruption.

The animation shows the steps in the formation of a caldera.

The volcano usually shows signs of erupting by producing earthquakes as the magma rises in the volcano.

When you shake a can of soda pop and then open it, you will get a shower of gas (carbon Dioxide) and pop. Why? Because the pressure was much higher in the can than outside of the can. When you opened the top the pressure released very quickly shooting the gas and pop out. 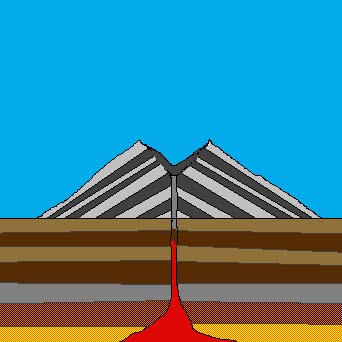 After a huge ejection of lava there may be no magma left in the chamber to fill the conduit and crater. When this happens there is a hollow space under the summit of the mountain where the magma used to be. The top of the mountain then collapses creating a caldera. 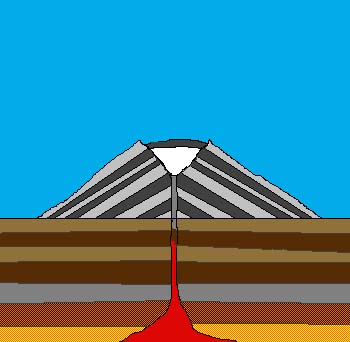 The caldera may fill with water creating a lake. This is what happened at Crater Lake in Oregon. The ancient volcano Mount Mazama erupted violently about 6,000 years ago creating a caldera. The caldera slowly filled with snowmelt and rain forming beautiful Crater Lake.

Another caldera forms most of the first national park of the United States, Yellowtone. The geysers and hot springs that make the park famous the world over are all volcanic in origin. In other word the park sits on top of an active volcano!!!! 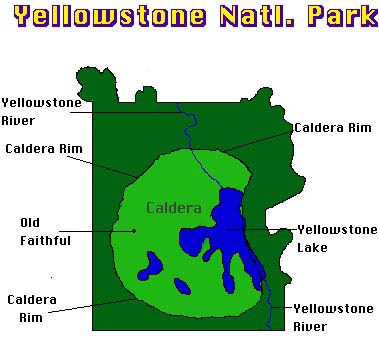 This is a map of Yellowstone National Park. Yellowstone sits atop a continental hot spot. As the North American plate moves steadily westward the hot spot affects different areas of the continent. Volcanic activity can be traced across the United States as the plate has moved across this hot spot.

This caldera is one of the largest calderas in the world. It is over 65 miles across!!

Millions of years ago the North American plate was hundreds of miles east of where it is today. As the plate moved west it slowly moved over the hot spot that is now under Yellowstone. The hot spot has created volcanic features through the western portion of the United States. Craters of the Moon National Monument in Idaho was created by the same hot spot.

(Open image in another window to see animation)

This is exactly the same process that formed the Hawaiian Islands. The North American plate continues to move, which means that millions of years from now the hot spot will be under South Dakota or Iowa!!

Remember as you watch the animation, the hot spot is stationary and the North American plate is moving westward!!! 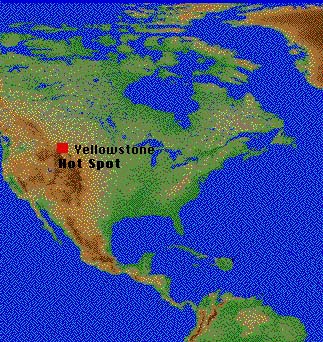 Today Yellowstone National Park sits directly over the hot spot. The volcano is quiet today, only the geysers and hot springs remind us that there is a huge volcano under the beautiful scenery. Only 600,000 years ago a huge eruption filled the area with lava flows. After the huge eruption there was a void under the top of the volcano. The weight of the volcano caused the top to come crashing down forming the large caldera in the park.

Write the answers to the following questions in complete sentences on a piece of paper. Use the page titles located directly under the questions to navigate your way through the lesson to locate the answers. When you have finished the lesson click on the Earth icon so the next group can begin the lesson.

2. How does and hot spot form?

3. How does a caldera form?