The photo above is of Mt. St. Helens today. This once beautiful mountain was changed dramatically on May 18, 1980. The eruption that occurred was a Plinian eruption, which is the most violent eruption classification.

As you learned in the last lesson, different magmas have varying amounts of silica and gas that cause the lava to either be thick and pasty or thin and runny. The thickness and thinness of the magma will determine how a volcano will erupt and what kind of a cone will form.

Volcanoes will erupt for two reasons

1. The magma deep under the crust is less dense than the surrounding rock causing it to rise.

Have you ever had a can of soda pop explode all over the room? This "eruption" of pop is caused by the same scientific principle that causes a volcano to erupt violently. When you open the pop can the pressure is released so quickly that the gas that is dissolved in the pop comes rushing out along with some of the pop. 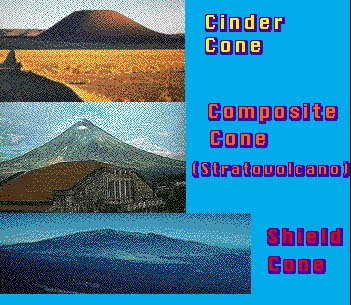 Volcanoes are classified by the eruption type and by the volcanic cone shape. 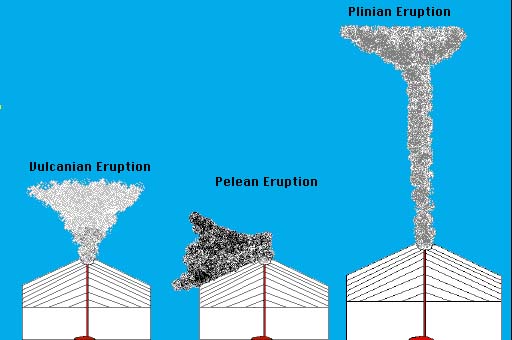 The six eruption types are in order from least explosive to the most explosive; Icelandic, Hawaiian, Strombolian, Vulcanian, Pelean, and Plinian.

You will read about these volcanic types in more depth later in the lesson. 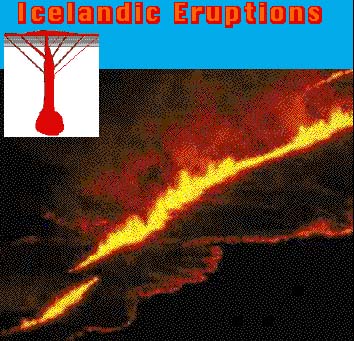 Icelandic, flood, or fissure eruptions are all terms for volcanic eruptions that flood the surface of the Earth with massive amounts of very hot, very thin, runny lava. The lava comes out of the ground through long cracks in the surface called fissures. Some of these fissures can be up to 15 miles long.

The type of cone produced from icelandic eruptions is a shield cone. Shield cones are very low and very broad shaped volcanoes. These volcanoes erupt many times over the same area forming huge, and thick lava plateaus.

The photo above is of Krafla Volcano on the island of Iceland.

The main difference lies in the fact that most Hawaiian eruptions have the greatest quantity of lava pouring out of the main vent at the volcano's summit, not along side fissures. These summit eruptions build the cone steeper and higher. The volcano above was formed from Hawaiian eruptions.

Shield cones were named by Icelandic people because the cone's shape reminded them of a warriors shield layed down. Shield cones form from hot, runny lava that is erupted from the the volcano through its summit and the many side vents and fissures throughout the volcano's flanks (Sides). Shield cones are low, very broad, and gently sloping volcanoes. The volcano pictured above is Mauna Kea, which is located on the big island of Hawaii.

Mauna Loa, which is also on the big island, is the largest volcano on Earth and the tallest mountain in the world if measured from the floor of the ocean where it was formed. Mauna Loa is 13,677 feet above sea level but over 17,000 feet of mountain lies under the water. This volcanic mountain is over 30,000 feet tall from sea floor to the summit. Maua Loa started to form above the Hawaiian hot spot about one million years ago and broke the surface of the ocean about 500,000 years ago. 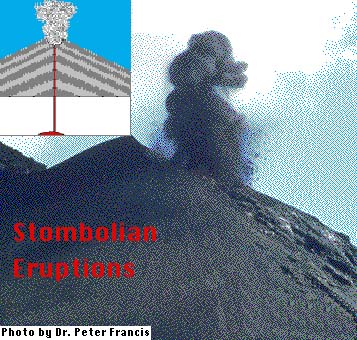 Strombolian and Vulcanian eruptions are more explosive than Icelandic and Hawaiian eruptions.

Strombolian eruptions are named for the volcanic island off of the coast of Italy. Stromboli has erupted over many centuries almost constantly. Stromboli has been named the "Lighthouse of the Mediterranean" because it erupts every 20 minutes or so.

Strombolian eruptions are short lived explosive eruptions that shoot very thick and pasty lava into the air along with bursts of steam and gas.

Strombolian eruptions usually produce little or no lava. Because of this the cones that are produced by this type of eruption is a very steep sided cone called a cinder cone.

The photo shows a strombolian eruption taking place from a cinder cone. 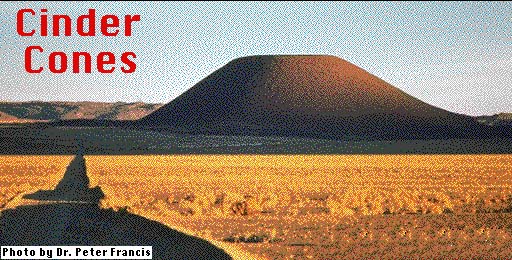 Cinder cones get their name from the material that forms them, cinders. Cinder cones are the simplest volcanic formation. They form from explosions of red, hot magma cinders and ash. These cinders and ash settle around the main vent and build a steep sided cone. Very little lava is erupted from a cinder cone. Cinder cones very rarely rise to more than 1,000 feet above the surrounding landscape. Cinder cones are known for their very violent, explosive, exciting eruptions. Paricutin in Mexico and Mt. Vesuvius in Italy are famous cinder cones. 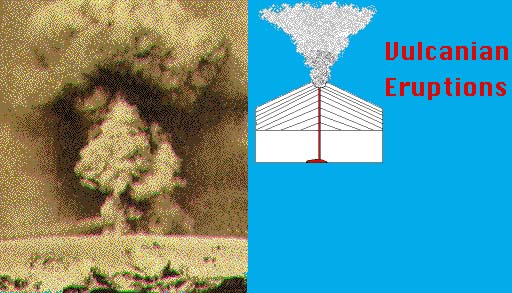 Vulcanian eruptions will send an ash plume to a height of 2 -9 miles. The photo to the left is of Katla volcano in Iceland which erupted in 1918. 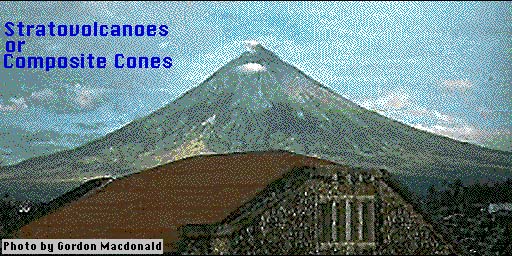 Stratovolcanoes or composite cones are formed from a combination of eruptions. First the volcano will have an explosive eruption that ejects huge amounts of steam, gas and ash. This will be followed by the ejection of lava. A large stratovolcano will be built with many layers of ash and lava.

Stratovolcanoes are the most common type of volcanic cone. There are many famous stratovolcanoes in the world. Mt. St. Helens and Rainier in Washington, Mt. Fuji in Japan, Mt. Pinatubo in the Philippines, and Mt. Etna in Sicily are all examples of stratovolcanoes.

The photo above is of the volcano Mayon, which is in the Philippines. 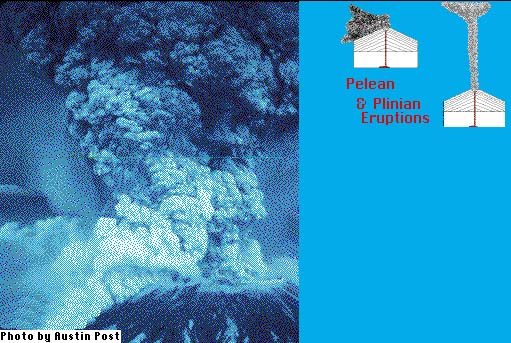 Pelean and Plinian eruptions are the most dangerous and explosive of the eruption types. Pelean eruptions are named for the catastophic eruption on the island of Martinique in the Carribean Sea in 1902. The eruption and the pyroclastic flow that followed killed 29,000 people almost instantly. "Glowing clouds" of gas and ash flew down the mountain at over 70 miles per hour. The cloud was so full of ash that it was heavier than air and hugged the ground as it approached the coast. The temperatures were probably around 700 degress F. which would annihalate everything in its path.

The only person to survive was a prisoner that was sentenced to death. The only reason he survived was that he was imprisoned in a very thick walled cell and the only door faced away from the explosion.

Mt. Vesuvius, which erupted in 79 A.D. in Italy, was a classic Plinian eruption. Very hot ash falls killed thousands of people in the city of Pompei. Ash falls as high as 17 feet buried the city. Plinian eruptions were named for Pliny the Elder of Rome who died in one of the many eruptions of Vesuvius.

Write your answers to the questions on a sheet of paper. When you finish the lesson click on the "Earth" icon so that the next pair of students will be transported to the start of this lesson.

Click on the page titles located directly under the questions to maneuver your way through the lesson to find the answers for the following questions.

1. Name the six eruption types and the three cone shapes.