Lava is melted rock that has reached the Earth's surface through a volcano's main vent or through side vents and fissures.

Some volcanoes produce little or no lava. Some volcanoes eject pyroclasts, which are fragmented or broken rock. The word pyroclastic comes from a Greek word that means "Rock broken by fire".

When volcanoes do produce lava flows they are classified as either Pahoehoe or Aa. The lava is identical in both pahoehoe and aa lava flows, the difference comes from the amount of lava erupted and the speed of cooling. Pahoehoe lava flows are produced from a small amount of lava that moves slowly, while aa flows usually are associated with a large volume of lava that moves swiftly. Aa flows are generally 6-15 feet thick and pahoehoe flows are usually 1-3 feet thick. Silica is a white or colorless crystal that is present in sand and quartz. It is one of the most abundant compounds in the Earth's crust. 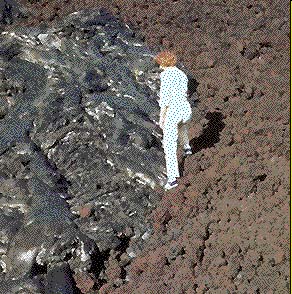 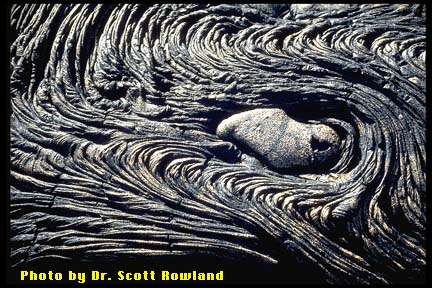 Pahoehoe (Pa-Hoy-Hoy) lava flows are very hot, thin and runny. When it cools is has a smooth to ropey texture because of the low silica content which makes it cool quickly.

Pahoehoe flows creep along generally at less than 3 feet per minute but some flows have been measured at over 20 miles per hour. The terms pahoehoe and aa are from the native Hawaiian language and are now used by geologists the world over. 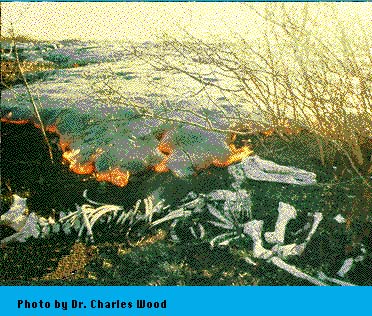 This pahoehoe flow is advancing on the skeleton of a large mammal perhaps a horse or a cow. The lava will engulf the animal and may fossilize the remains!! 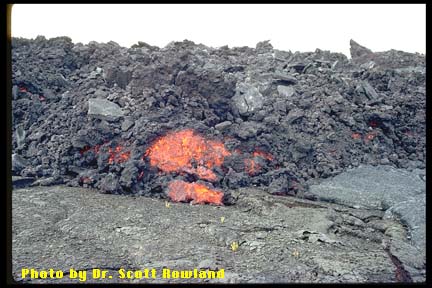 Aa lava flows are formed when the lava is produced in a manner that allows it to cool quickly. When a fire fountain shoots the lava high into the air it cools somewhat before it can flow after landing on the surface. Aa lava also forms when there is a huge amount of lava produced or a steep slope moves the lava at high speeds. These high speeds put the lava in greater contact with the air, which makes it cool more quickly.

Notice the rough and fragmented upper surface of the photo at the left. Would you like to walk barefoot on this after it cools? 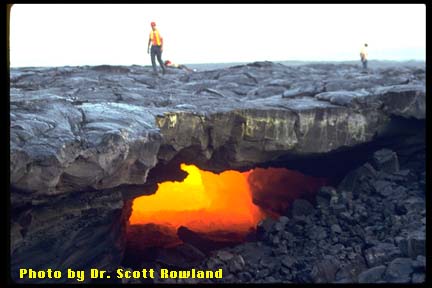 A pahoehoe lava flow produced the lava tube in the picture above.

A lava tube forms when the lava on the outer surface of the flow cools much faster than the inside of the flow. The outside becomes cooled hardened lava rock while the inside stays molten and also keeps flowing. If something happens to stop the flowing lava there will be nothing to fill the void and a tube is the result. 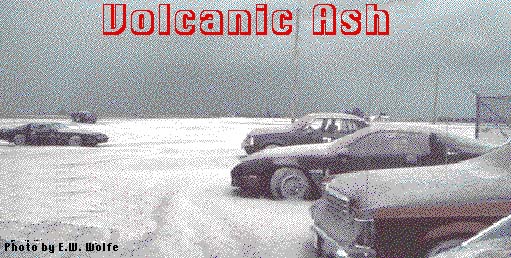 No, this is not a North Dakota blizzard. This photo is showing the ash fall from Mt. Pinatubo's (Phillipines) eruption in 1992. Many inches of ash fell and the U.S. Naval and Air Force bases near the mountain were closed because of the eruption.

When Mt. St. Helens erupted in 1980 the ash cloud rose to an altitude of over 50,000 feet, that is almost 10 miles high! The mountain kept spewing ash for another nine hours on May 18th. The ash deposits were many inches deep in many cities in Washington. This ash choked humans and animals. People were forced to wear gas masks so they could go outside of their homes.

Pyroclasts are particles that are ejected during a volcanic eruption. They range in size from very small particles called dust to ash (1/10 of an inch) to lapilli ("little stones" 1/10 of an inch to 2 inches ) to the largest of the pyroclasts, blocks and bombs (2 inches to many feet in diameter).

Volcanic Ash is any very fine grained material erupted from a volcano that is less than 1/10 of an inch (2 millimeters) in diameter. This is very fine material and was given the name ash because it resembles ashes from the burning of wood or coal.

Volcanic ash is rock that has been exploded and shattered by steam inside the volcano. Ash and lava flows build stratovolcanoes into mountains with repeated eruptions. 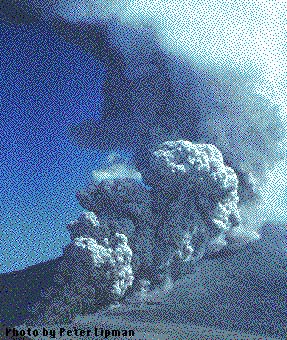 Pyroclastic flows are spinning mixtures of pyroclasts (small pieces of obsidian, ash, pumice, and cinders) and very hot gases. They flow down the side of the volcano at speeds up to 100 miles per hour and at temperatures sometimes over 700 degrees Fahrenheit!! With temperatures that high pyroclastic flows kill everything it their path.

There were two pyroclastic flows from Mt. St. Helens main eruption in 1980. The first flow was called the "stone wind" and it annihilated everything in its path. Huge trees over one hundred feet tall were snappped and splintered like twigs. Temperatures of over 700 degrees ate up all the oxygen in the area. All animal life in its path was destroyed in seconds including 57 humans. Later in the day another pyroclastic flow piled pumice and ash in thick deposits for many miles around the mountain.

The photo above is a pyroclastic flow down the north flank of Mt. St. Helens. 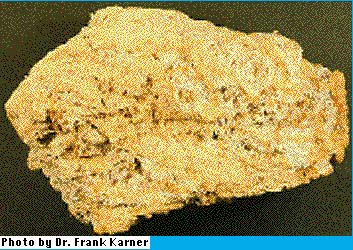 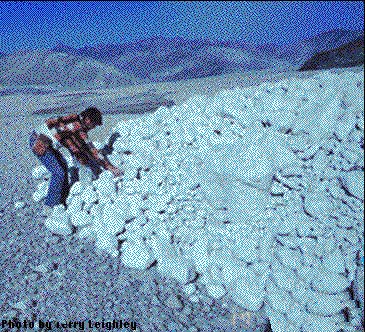 Bombs and blocks are the largest of the pyroclasts.

Blocks are angular chunks of rock that has been ejected from a volcano during an eruption.

The photo above is of a geologist studying pumice blocks from the May 18, 1980 eruption of Mt. St. Helens. 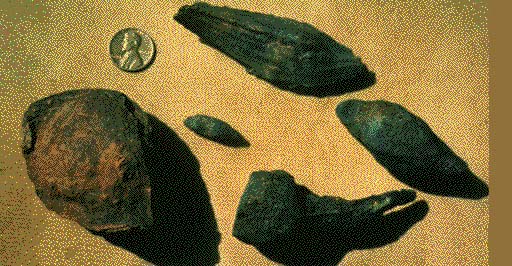 A bomb is formed as lava hurtles through the air, cooling and forming a hardened lava rock. A bomb's shape is usually more rounded or streamlined. Notice the teardrop shape of the bombs. 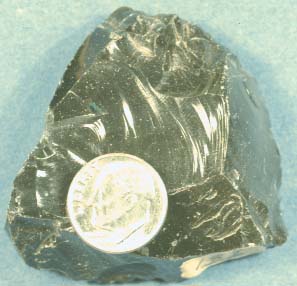 Obsidian is a very shiny natural volcanic glass. When obsidian breaks it fractures with a distinct conchoidal fracture. Notice in the photo to the left how it fractures. Obsidian is produced when lava cools very quickly. The lava cools so quickly tht no crystals can form.

Ancient people throughout the world have used obsidian for arrowheads, knives, spearheads, and cutting tools of all kinds. Today, obsidian is used as a scapel by doctors in very sensitive eye operations.

Write the answers to the following questions in complete sentences on a piece of paper. Use the page titles located directly under the questions to move your way through the lesson to locate the answers. When you have finished the questions click on the Earth icon to return to the start of the lesson.

2. What is a pyroclast and how do they form?

3. Write a definiton for the following;