Continued transport of magma down the rift zone results in the establishment of a thermally efficient conduit probably 2-3 km below the surface. Some evidence for this was provided by the first 10 km of propagation of the dike marking the onset of the Pu'u 'O'o/Kupa'ianaha eruption being aseismic (Klein et al. 1987). This indicates that there was a pre-existing conduit could be utilized by the migrating magma. This distance corresponds rather closely with the distribution of pit craters along the east rift Kilauea. Beyond the first 10 km, earthquakes marked the propagation of the dike.

Pit craters are not explosion craters or vents, but rather they are locations of localized collapse into a void. The above-mentioned conduit is the best candidate for such a void. A pit crater forms from the bottom up by stoping of a cavity.

The schematic diagram on the left shows the formation of a pit crater from the bottom up. This cross-section is cut perpendicular to the line of a rift zone, and "C" represents the main conduit at 2-3 km depth. Note that the crater is not a piston that has dropped and that the top lavas are the last to fall in (from Walker 1988). This process of a void working its way upward through solid rock (like a bubble) is called "stoping", and it commonly occurs in mines. The void and the eventual crater have a volume greater than the conduit, however, the conduit can continually carry material downrift. 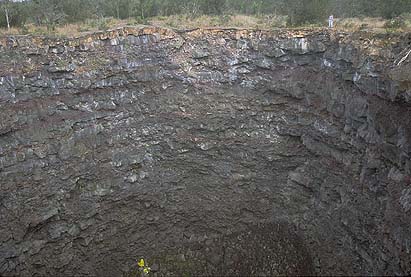 Evidence for this is provided by a pit crater called the "Devil's Throat." When first noticed by Westerners, Devils Throat was a hole in the ground a few 10's of m across. A very brave man was lowered through this opening on a winch, and he soon found himself in a huge cavity, much wider than the hole he'd come through. It was evident that he was in a bell-shaped void and that the top layers of lava had not yet collapsed into it. Since then the last layers have fallen in, leaving Devil's Throat with the more typical cylindrical form of a pit crater.

On the right is a photo into Devil's Throat pit crater. Note that numerous pre-existing flows that are exposed in the walls, and the geology student for scale.

Eruptive fissures occasionally cut right across pit craters apparently without noticing the difference in topography. An eruptive fissure can extend from the floor of a pit crater, up the wall, and continue on beyond the rim. 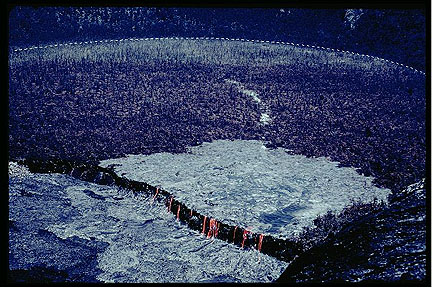 Photo (taken in 1973 by Gordon Macdonald) showing a short curved fissure erupting across the floor of Makaopuhi pit crater. Lava is erupting (but not fountaining) from the near end whereas the far end is emitting only steam. The dotted line marks the base of the far wall of the crater. Makaopuhi is actually a double crater, and the lava cascades mark the boundary between the deeper near half and the shallower far half. The near half was previously twice as deep as the far half; eruptions prior to the one seen here almost made the two levels the same, and this eruption did eventually fill the deeper half to give the crater a single floor level.

In summary, vent, graben, and pit crater distributions yield insight to the preferred directions of magma travel within a Hawaiian volcano. These in turn can yield information about the stress directions within the edifice (e.g. McGuire & Pullen 1989; Rubin 1990). There have been some attempts to tie these stress directions to the stress field within the Pacific plate but it appears that the local stress field caused by neighboring volcanoes is much more important in determining the eventual direction of rift zone formation.