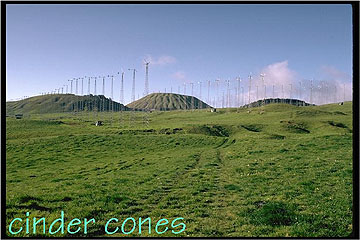 At the high-fountaining end of the spectrum are cinder cones. Cinder cones can be quite large in Hawai'i; those on the summit of Mauna Kea (formed during gas-rich alkalic-stage eruptions) are a few hundred meters high, whereas those on Mauna Loa and Kilauea usually range between 20 and 100 m high. Pu'u 'O'o on the E rift of Kilauea, which formed between 1983 and 1986 is unusual in that it reached a height of 255 m above the surrounding surface (Heliker &amp; Wright 1991).

A photo of Pu'u 'O'o cinder cone, Kilauea, viewed toward the west. The prevailing right-to-left tradewind direction is obvious from the way that the plume is being blown. During the eruptions that formed Pu'u 'O'o, these same tradewinds built the cone much higher on the downwind side of the vent than the upwind side. Almost all the lava flows therefore came out of the upwind side (i.e. towards where the photo was taken). 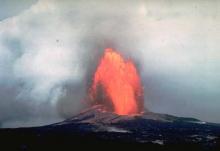 As their name suggests, cinder cones consist of cinders, more properly called scoria. Scoria is very vesicular, low density basalt. Lava fountains are driven by expanding gas bubbles; the bubbles are trying to expand in all directions but the only way to relieve the pressure is up out the vent so fountains are usually directed relatively vertically. The Pu'u 'O'o fountains were at times up to 350 m high, and those during the early stages of the Mauna Ulu eruption were up to 500 m high. Because the pyroclasts are thrown so high, they cool before they land and don't stick together. Cinder cones are therefore composed of loose pyroclastics at the angle of repose (~33º).

An image of fountaining at Pu'u 'O'o, Kilauea (July 1985). These particular fountains were ~200 m high, and were sending short fast flows in many directions.

In plan view, cinder cones tend to be roughly circular. They are usually formed later in an eruption when activity has localized to one or more discrete vents. If the precise location of the vent changes during an eruption, the cone loses its simple circular shape, and becomes more complex. Roadcuts through most cinder cones expose very complicated crosscutting relationships relating to the different locations of the fountain centers.

Photos of cinder cones on Mauna Kea (arrows), viewed from the summit of another cinder cone. The reddish color is common to cinder cones and occurs both during and soon after the associated eruption due to the combined efforts of moisture and oxidizing gases. The light blue line marks the Mauna Kea-Mauna Loa boundary. Note that one of the cones (yellow arrow) has been surrounded by (younger) Mauna Loa lavas.

Cinder cones can also be distinctly asymmetric if there was a persistent wind blowing during the eruption and/or they form at the heads of major lava flows. In this second instance they are horseshoe-shaped (see below), with the lava flow issuing out of the open end because during the eruption any pyroclasts that landed on the flow were rafted away.

A Mauna Kea cinder cone viewed from the air. A lava flow field (white outline) has issued from the base of the cone, giving the cone an asymmetric form. The flow spread almost all the way around the cone (white arrows). Magenta lines mark the rims of older cinder cones nearby.

Between the two extremes of spatter ramparts and cinder cones are all gradations. Some pyroclastic constructs consist of alternating layers of agglutinate and cinder, indicating that the vigor of the fountaining varied during the eruption. The early part of an eruption, often called the "curtain of fire", produces mostly spatter ramparts and spatter cones. As the activity becomes localized at one or more points along the fissure, this concentration of activity usually leads to higher fountaining. Cinder cones are built at these points, often at the same time that spatter ramparts are forming at the (less active) ends of the fissure. During the Mauna Loa eruption of 1984, there was a distinct gradation from vigorous fountaining at the main vents, progressing to lower and lower fountaining both up and downrift (Lockwood et al. 1987). At the farthest uprift end of the fissure, only gas was being emitted from a spatter cone that had been active earlier in the eruption.