Beerenberg, a stratovolcano, is the northern-most active subaerial volcano on Earth. The volcano, mostly covered by glaciers, forms the north-end of Jan Mayen Island, 375 miles (600 km) north-northeast of Iceland. Jan Mayan is 54 km long and has an area of 145 square miles (380 square km). The island is less than 700,000 years old. The south part of the island is a mountainous ridge made of scoria craters, scoria mounds, and trachytic domes. Map based on Sylvester (1975). 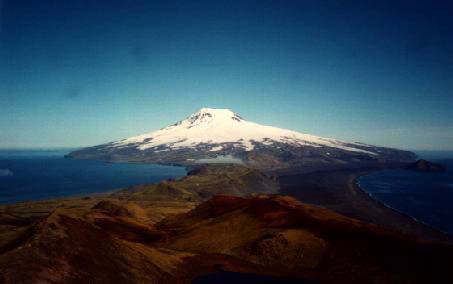 Picture of Beerenberg copyrighted by Heilund.

Beerenberg is a large 2277-m-high glacier-covered stratovolcano with a 1-km-wide summit crater and numerous cinder cones that were erupted along flank fissures. It is composed primarily of basaltic lava flows with minor amounts of tephra.  It is located in a farirly unusual tectonic setting near the intersection of the Jan Mayen Fracture Zone (a transfrom fault) and the Mohns mid-ocean ridge. The Kolbiensey Ridge is 105 miles (170 km) to the east. Map based on Sylvester (1975).

The 1970 eruption began on September 18 and continued to January, 1971. Intense storms hid the onset of the eruption. A commercial pilot spotted the eruption cloud on September 20. It was the only historic eruption witnessed in modern times. The eruption was large, erupting at least 0.5 cubic km of basalt from a 3.7 mile (6 km) long fissure that ran from sea-level to an elevation of 3,000 feet (1,000 m). There were at least five active craters.

The 1985 eruption began on January 6, 1985 and lasted only 35-40 hours. In that brief time about 7 million cubic meters of lava was erupted (rougly enough to bury a football field in 1400 yards of lava!). Earthquakes, with magnitudes up to 5, occurred during the eruption. The eruption was thought to be from a leaky fracture zone not the Jan Mayen magma system proper (Imsland, 1986). The vent was 22 miles (35 km) from the settlement.