Thor Thordarson graduated with a Bachelor of Science from the University of Iceland. He received a Masters Degree in volcanology from the University of Texas at Arlington. He went on to the University of Hawaii and completed his Ph.D. with Professors Stephen Self and George P. L. Walker. His professional experience is equally (geographically) diverse, he has worked at the Nordic Volcanological Institute in Reykjavík, Iceland, with the IGNS Volcanology Group at Wairakei, Taupo, New Zealand and finally with the CSIRO Magmatic Ore Deposit Group in Perth, Western Australia

His research includes studying Archean (very, very old!) volcanic rocks in Western Australia and more modern volcanic rocks in Iceland, Hawaii, and Washington State. As a hobby, he is very interested in volcanic activity and history of volcanic research in Iceland. When he needs a break from all things volcanic, he dabbles in soccer, martial arts (Tae Kwon Do), poetry, and studying eastern philosophy and the history of native American Indians.

How did you get started in volcanology?

A good question, but unfortunately I don't have a simple or a straightforward answer.

My mother claims that she always knew that I would become a volcanologist and I am the last person to question her reasoning. However, logic tells me that there is not much connection between my childhood habit of filling my pockets with stones and volcanic activity.

I am not sure what role my childhood activities played in the decision of career path, but growing up in Iceland it is very difficult to avoid contact with volcanoes. They are all around and are a big part of our culture and history.

I have often wondered whether the fact that my main playground, which consisted of a lava flow featuring long dark and mysterious caves (i.e., old lava pathways known as lava tubes) had something to do with the whole process. Probably not, because not one of my childhood playmates are even remotely interested in volcanoes.

I have also often wondered about the role other factors such as seeing my first eruption (Surtsey in 1964) at the age of six. Or at age twelve, taking a 3-hour-long journey in the back of a "bad-smelling" jeep (normally used to transport sheep between pastures) to get up close with the glowing lava from the 1970 eruption at the Hekla Volcano. Or as a 15 year old teenager going for a lazy afternoon stroll onto the still active 1973 Eldfell lava flow on the island of Heimaey, when a really bad storm forced my grandfather seek shelter there for us and his fishing boat.

These events must have had some affect because the images of these eruptions are still as clear today as they were then. This more or less sums up my volcano experience before entering adulthood. However, if memory does not fail me, not once during these years did I consider the possibility of becoming a volcanologist or showed any extraordinary interest in volcanoes.

The thought of making volcanology a career first entered my mind during my undergraduate studies at the University of Iceland. I was inspired by the teachings of late Professor Sigurður Þórarinsson and my lifetime mentor in volcanology, Guðrún Larsen, as well as their devotion and enthusiasm for volcano studies. But even then I was not sure about a career path, because my academic interests where all over the place extending to disciplines such as sedimentology, petrology, glaciology and oceanography.

The decisive moment came in August 1983, when I first laid my eyes on the Laki cone row immersed in orange red light of the setting mid-summer sun. At that point there was no turning back, the volcanoes had captured my soul. It was a brilliant image! A line of well over hundred tephra cones superimposed on a 27-km-long volcanic fissure stretching across the landscape from the southwest to northeast - literally splitting the mountain Laki in two around the half way mark of the fissure. Behind me, the ice-capped Katla volcano towered over the landscape and some 40-km to the north east the rims of the Grímsvötn caldera rose up from the vast ice fields of the Vatnajökull glacier that is the largest ice cap in Europe. At that time I was completely taken by the urge to understand the mechanics of these sublime, and at the same time mysterious or even mythological, structures. I still am.

What was it about studying volcanoes that drew you to the field?

First of all, the mystic and the fact that I could spend lot of time outdoors up in the mountains.

On a more serious notes, I have always been attracted to the multidisciplinary approach as is required in volcanological studies because not only does it offer diversity but also a continuous challenge to acquire more knowledge and to do better. In their own way, volcanoes remind us that despite our enormous achievements in the field of science and technology, we have still a long way to go before attaining a comprehensive understanding of what makes Mother Earth tick.

It is important to remember that volcano studies are not only important for assessing risk and preventing hazards, but also from an economic point of view. One of Earth's largest energy source (i.e., geothermal energy) is driven by volcanic activity and many of the richest ore deposits on our planet were formed by past volcanism. Thus a good understanding of volcanic systems is of value to mankind.

What would you rate as the best experience you've had while working on a volcano?

Another difficult question to answer because just being on a volcano is enough for me, but since I have to pick one, it has to be witnessing the beginning of the June 17, 1996 eruption at Ruapehu Volcano in New Zealand.

It all began with a wake-up phone call at 6 o'clock in the morning. It was my boss, Professor Bruce Houghton, who said that a white steam column had been seen rising from the summit crater and that the tremor levels had gone up. We had to go check the status of the volcano, which had been relatively quite for 7 months (or since November 1995). I had about 5 minutes to get ready because the chopper was waiting for me at the airport and half an hour later we were in the air on our way across Lake Taupo heading straight towards Ruapehu.

The white steam plume became more apparent as we approached the volcano from the northeast, carried to the north by strong southerly winds. As we circled the summit crater from east through south to west all we saw was white steam, nothing unusual to report and I was anticipating a quick return to Taupo.

But as the helicopter turned around to make the second pass by the summit crater, I saw a small (roughly 100-m-high) black ash-rich slug rise from the summit crater and up through the white steam column. Another one, slightly bigger than the first soon followed it, and then one after another they emerged at increasing frequency and gradually growing in size and volume. Before we knew it, the eruption had produced a roughly 4-km-high almost pitch-black eruption column and up to 10's-km-wide plume drifting to the north over Taupo and Rotorua. The column was almost constantly lit up by lightning strokes and ballistic blocks up to several meters in diameter were ejected from the vent, curling through the atmosphere before crashing into the ground. The shower of ballistic-blocks was so intense that snow covered summit peaks were inundated with impact craters.

It was clear that we had just witnessed the beginning of a major eruption at Ruapehu (turned out to be the largest event of the 1995-96 eruption episode) and that from "the Grand Stand". It was a marvelous spectacle and the view impeccable as we were suspended in mid-air at a safe distance. The near-complete darkness below the plume was a striking contrast to the clear sky and the sun-bathed countryside all around it. An additional satisfaction came from the fact that Ruapehu put on this spectacular show on 17 June, just as if it was joining me in celebrating the Independence Day of Iceland.

What was the funniest thing/strangest experience that has happened to you while working on a volcano?

Before I attempt to answer this question it is important that the readers realize that anyone working on an active volcano is aware of the possibility (however remote it might be) that it can erupt any time and without much warning. Thus, when I am working on a volcano my alert-level is unusually high.

Have you ever tried to walk across an `a`a lava flow in the dark and without a flashlight? If not, then don't!
It was in January 1991 and we were measuring and filming the active lava rivers of the erupting Hekla Volcano in Iceland. Needless to say, we got carried away and stayed out there for too long. As we were heading back, darkness set in and the pitch-black rubbly and highly irregular lava surface simply merged with the blackness that surrounded us. Not a good sign. I had left my torch in the truck and we had to walk at least 2 km across the flow field to get back to the truck. Needless to say, I had to get on my "four legs" and slowly crawl my way back to the truck. Between episodes falling flat on my back or my stomach, I spent most of my time rolling and tumbling over spiky obstacles and my outfit was completely in shambles after the exercise . Well, I got what I deserved; it pays to be prepared.

A little shake has never hurt anyone!
In February 1995, on the last day of a two week-long working trip to the White Island volcano in New Zealand, I was working on the outer slopes of the cone, about one-kilometer from the vents that were active between 1976 and 1992. Early in the morning, I had planted myself in a 1.5m deep pit, a standard procedure as I was measuring a section through a series of historic tephra layers. Half way through the exercise, the ground began to shake gently - gradually increasing in intensity over a period of a minute or so and a large steam cloud billowed up from the main crater. There was I, sitting in my hole on an active volcano and the first thought that came to my mind was - the volcano is about to erupt and I am trapped in this hole! I felt awful small at that moment.

The shock of running water!
It was a summer day in 1986 and I was crossing the main outlet glacier of the Kverkfjoll central volcano on my way from one outcrop to the next. It was a gorgeous day, the sun was shining bright and most of last winter snow had melted exposing crevasses and other clefts and the sun was practically bouncing of their deep ice-blue walls. Suddenly, the tranquillity of the situation was interrupted by fast-growing noise of running water, but nowhere could I see any water flowing or approaching. It all became obvious in an instance, because suddenly I noticed that the surface of the glacier was moving up and down like a wave and the rushing water was right below the ice I was standing on. It was time to get off the "ICE" and fast.

What happened was that a "jökulhlaup" had begun as I was crossing the glacier, which simply means that water normally stored in the summit caldera of the volcano came rushing down through a subsurface pathway within the glacier, bursting out at its snout and causing a flash flood in the outlet rivers.

It offers a constant challenge of doing better, both physically and mentally, and allows you to use your imagination. Another advantage of being a volcanologist is that one gets to travel to secluded and unusual places. 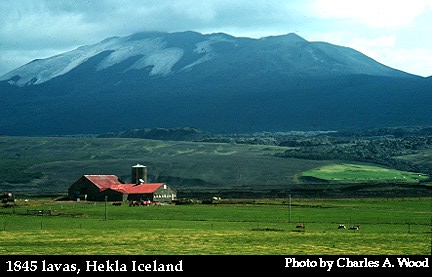