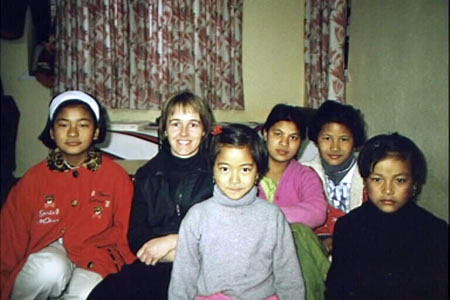 Tina Neal is a volcanologist with the U.S. Geological Survey who has worked as the geoscience advisor to the Office of U.S. Foreign Disaster Assistance.  Prior to this position, Tina was a staff geologist at the Alaska Volcano Observatory in Anchorage where she participated in a number of eruption responses, worked on the aircraft and ash problem, and studied Mt. Spurr, Mt. Redoubt, and Aniakchak volcanoes.

She has also worked at the Hawaiian Volcano Observatory (HVO) on the Big Island of Hawaii. She has an ScB in Geology from Brown, a MS from Arizona State University, and she did additional graduate study at the University of California at Santa Barbara.

How did you get started in volcanology?
What was it about studying volcanoes that drew you to the field?
The truth is that I wanted to be an astronaut growing up. In college, pursuing a pre-med track, I attended a lecture by Tim Mutch on the Geology of Mars. He convinced me that I might gain access to space by studying geology so I gave it a shot. After one semester I was hooked. Volcanoes are one of the most obvious of planetary themes, and so my first research projects in college classes dealt with lunar and Martian volcanism. In graduate school at ASU, I had a chance to visit Mount St. Helens (MSH) with Steve Self – I ended up doing a MS thesis on the 1980 pfs (pyroclastic flows). While working at MSH in the summer of 1982, I saw my first eruptions, felt my first earthquakes while inside the MSH crater, and watched the CVO (Cascade Volcano Observatory) crew do the business of monitoring and studying a live volcano: I was hooked.
There are many wonderful experiences I can think of, it is very hard to choose. Each volcano I have visited has its own set of special memories. I suppose the winner has to be my very first visit to an eruption at Kilauea. It was my first week on the job as a very green young kid at HVO (Hawaiian Volcano Observatory). The East Rift eruption was still in the single digit episodes, and Pu`u `O`o was only 20 m tall, barely a blip on the rift zone. Low, intermittent lava fountains huffing and chuffing above us, I followed Ed Wolfe out over pahoehoe from Pu`u `O`o, still glowing in the cracks below my feet. I could not believe I was there, honored to have the opportunity, and in awe of everything I saw.
What was the funniest thing that happened to you while working on a volcano?

Hmm. Other than the many laughs in the cook tent inside Aniakchak during an eruption of Pu`u `O`o, a helicopter landed at our camp just after dawn. Out popped a reporter (male) followed by a woman in a full evening gown and high heels. They had just flown in from Kona after an all-night party. Thrilled by the sight of lava spurting above the cone about 1 km away, this woman proceeded to hobble in her shoes across the new lava field and back. I was impressed by her persistence.

What was the strangest experience you ever had on a volcano?
Has anything weird ever happen to you?
Working on the west flank of Kilauea, I used to spend nights camping alone at a place called Pepeiau at the edge of the Hilina grasslands overlooking the south flank. On still evenings, just after sunset, the profile of Mauna Loa still visible in the western sky, I would sometimes hear a deep, faint “hum.” The sound would continue for hours and then slowly fade away. I could not explain where it came from – it appeared to have no directionality and it did not vary in pitch as it might if it were related to wind or surf or distant machinery or traffic. I did not hear it while camping on other parts of the volcano’s west or south flank. On two occasions I had company who could verify the hum. I still can’t explain the Pepeiau hum.

Another time, just after dawn, a group of us were driving to the summit of Mauna Loa to conduct a geodetic survey. A M 6.7 EQ (earthquake) happened maybe 10 km away and we did not know we were having an earthquake because of the bouncing of the truck over the exceedingly rough 4WD road. Columns of red dust, illuminated by the early sun, rose from the walls of the summit caldera and we thought an eruption was beginning. Then, when John Dvorak radioed in the report, I demanded that we stop the jeep! I felt so cheated! I wanted to hop out to feel aftershocks!

Have you every been scared or really worried while working on a volcano?
I have never been really scared on a volcano due to the volcano itself; there have been times when weather closes in or flight conditions have definitely been frightening, especially during my years working in Alaska. I think the aircraft work of volcanologists is as dangerous if not more so than the active volcanoes we visit and study.

In Alaska, I have had a few close encounters with grizzly and black bears, including a young brown bear that was attracted to Michael Ort’s black bean dinner at the Ukinrek Maars. He stuck his quivering nose and head into our weatherport one evening, catching 4 of us off guard. A flurry of gun grabbing and yelling ensued and the bear thankfully stepped outside. Michael managed a deterrent blast of pepper spray, under cover of my 30-06 and a shotgun, and the bear fled to paw his irritated eyes. We kept watch all night but the bear did not return.

Another time at Ukinrek, a group of us rounded a patch of alders and spooked a beautiful blonde grizzly who was down on all fours grazing. The bear stood up in a flash. I can only remember my neck snapping back as I tried to follow the trace of his head – it seemed an impossibly great distance above me….in a heartbeat he raced off, leaving us to gaze with enormous eyes at each other, pulses racing, knees a bit like jello!

What was the worst thing that you’ve experienced on the job?
Did it make you wonder if you should change professions?
Going through the RIF (Reduction-in-Force) of the USGS was the worst episode of my professional career (eds. note: in 1995, about 500 employees from the Geologic Division of the USGS, or 20% of it’s workforce, lost their jobs), but that does not make for good lessons to the rest of the world. Downsizing is horrible in any profession – and even if you end up retaining your job – the process is demoralizing and stressful.

Other difficult times were due to conflict with coworkers – sometimes about work issues, other times sadly about interpersonal behaviors.

Neither of these kinds of experiences made me question my field.

What do you like best about your chosen profession?
What’s the most difficult thing about being a volcanologist?
The best part is being able to work outside, in beautiful, sometimes wild places, with outstanding people. It is thrilling to make contributions, however small, to the accumulating understanding of volcanoes and volcanic processes. Also, being able to communicate this knowledge to the public and other decision makers in order to make people safer and more educated about the world makes the “pure science” aspects all the more satisfying.

The most difficult thing? For many it is finding a job! Unfortunately, there are not many spots for volcanologists.