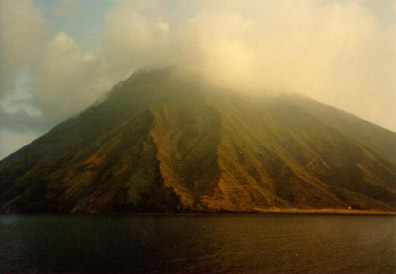 Stromboli is one of the Aeolian Islands of Italy. The island is about 3 miles (2 km) in diameter and 2,900 feet (900 m) above sea level. It rises 10,000 feet (3,000 m) above the floor of the Tyrrhenian Sea. This photo shows the volcanic island of Stromboli. Photograph courtesy of and copyrighted by Mike Lyvers. 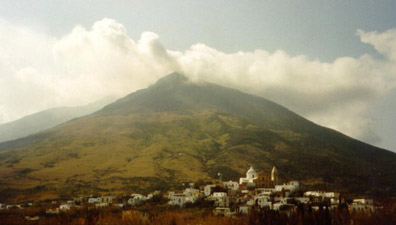 Stromboli is one of the most active volcanoes on Earth. It has been in nearly continuous eruption for about 2,000 years (some volcanologists suggest 5,000 years). Most of the present cone was well developed 15,000 years ago. This photo shows the volcano and town of Stromboli. Photographs courtesy of and copyrighted by Mike Lyvers.

Most eruptions at Stromboli consists of small gas explosions that hurl incandescent blobs of lava above the crater rim. Several explosions occur each hour. Larger eruptions and lava flows are less frequent. When this type of eruption is observed at other volcanoes it is often referred to as a Strombolian eruption.

Violent eruptions are rare at Stromboli. In 1919, four people were killed and twelve homes destroyed by blocks, some of which weighed 60 tons (50 metric tons). In 1930, during the largest eruption of Stromboli this century, three people were killed by pyroclastic flows. A fourth was scalded to death in the sea near the point the flows entered the ocean. The amount of ash erupted in the explosive eruptions in 1930 was equivalent to that produced during five years of normal, quiet activity. Most recently, in 1986, a biologist was killed by a block while on the crater rim. Photograph copyrighted and provided by Steve O'Meara of Volcano Watch International. Photograph taken in early May, 1993.

All photographs copyrighted and provided by Steve O'Meara of Volcano Watch International. Photographs were taken in early May, 1993.

Photograph copyrighted and provided by Steve O'Meara of Volcano Watch International. Photograph taken in early May, 1993.

For more information and images of Stromboli, click here.

Video For Quicktime and MPG movies of Stromboli look HERE