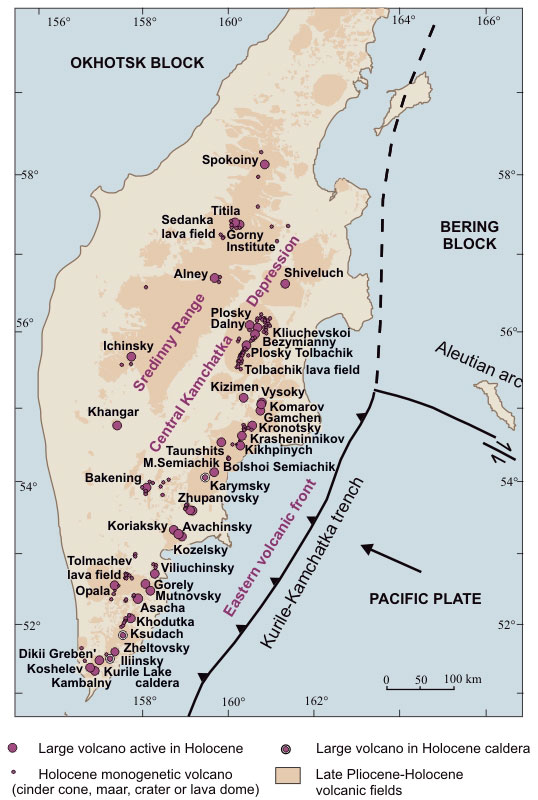 The Kamchatka Peninsula in Far East Russia is one of the most volcanically active locations in the entire world. Part of the Ring of Fire, Kamchatka has the highest density of volcanoes and associated volcanic activity in the world. This place, deemed Russia's Yellowstone, is home to over 130 volcanoes, 29 of which are still active today. The land's beautiful scenery and wildlife along with the numerous outdoor activities available draw thousands of visitors each year. It is known for its amazing diversity and abundance of wildlife and nearly pristine frontier land. The peninsula, surrounded by the Pacific Ocean to the east and the Sea of Okhotsk to the west, is a 1,250 kilometer long portion of the 2,000 kilometer long Kuril-Kamchatka island arc, which contains nearly 10% of the world's active vKutkholcanoes.


First "discovered" in the 17th century by Russian explorer Ivan Kamchatiy, Kamchatka is currently inhabited by over 400,000 Russians. However, the peninsula has been the home of people for thousands of years. Several distinct groups of people call this fiery land home. The native people of this land are divided among tribes known as the Koryaks, Itelmens, Chukchis, and Tunguses. Today Kamchatka is populated by mostly Russian people, with the native people of the region making up a minority that represents 10% of the population. The region thrives off of tourism and recreation while its base industry is solely in fishing and fishing industries.


The root of mythology pertaining to volcanic activity in Russia finds itself in the stories and beliefs passed on from generation to generation in the tribes of original inhabitants of the Kamchatka Peninsula. Each tribe carried a different lifestyle, based in large part on the location with in the peninsula that they called home. The way the native people lived and the specific land features that made up their territory in the peninsula led to different beliefs and concepts of life, death, and creation. Many of the beliefs of these tribes revolve around the frequent volcanic activity surrounding their land, explKutkhaining the reason for volcanic phenomena. Explanations of volcanic eruptions and other activates sparked the formation of the beliefs of the people.


The Koryaks, the largest population of native people, call the northern part of Kamchatka home. It is in the north that large volcanoes shadow beautiful valleys of green pasture and forest. Koryak, which literally translates to "reindeer people", describes the means by which these people live. The Koryaks are reindeer herders, harvesting deer to provide all of their necessities. The people used deer resources for everything from clothes to shelter. It is from this lifestyle that their understanding of volcanic activity takes shape. The central figure of Koryak belief is Kutkh, the great raven god. Koryak beliefs describe Kutkh, the Great Raven, as the first man, father and protector of the Koryak. Almost every Koryak myth and story deals with the life, travels, and adventures of Kutkh. The Koryak believe that creation began when the great raven swooped over the sea and dropped a feather, thus creating Kamchatka. Once he established land he created men to inhabit his creation. After some time Kutkh created a woman and placed her within the land for the men to continue creation. She was very beautiful and all of the men fell in love with her, desiring her affection deeply. As the men died they became mountains, turning the originally flat land into mountains. The mountains turned to volcanoes as the hearts of the men with in each mountain still burnt with fiery love for the woman. It is the hearts of these original men that created the mountains, which shaped the peninsula into what it is today. According to the 2002 census, there were 8743 Koryaks left in Russia. Visit Koryak.Net for more information on the Koryak people, history and culture.


The Itelmen are one of the least populous but one of the most ancient peoples of the North. The earliest known archaeological sight of the Itelmen presence on Kamtchatka peninsula is 5200 years old!! The Itelmen made their home in the southern tip of the Peninsula, the Lopatka Cape. Itelmen translates into "living here", becoming the nationality of the tribe upon settlement of the rugged mountain region of the south. A very primitive people, the Itelmen were nomadic hunter and fishers, living this lifestyle as late as the 18th century. The summer months had the Itelmen taking carved boats into the rivers and ocean to fish and hunt whale while the summer months had them taking to the mountains to hunt animals. The Itelmen provided their necessities through animal resources, forcing them to move from location to location in the peninsula frequently, dwelling in half dug homes as they stopped temporarily. The Itelmen have a pagan belief system, meaning they have many gods to represent their creation, life and death. The Itelmen believe that all dangerous places, such as volcanoes, hot springs, forests, water, etc., are inhabited by devils, which they fear and respect more than their gods. The gods only explain their existence; it is the demons that dwell with in the volcanoes that govern their lives. Volcanic eruptions are explained by the belief that mountain demons, called gomuls or kamuli, lived on fish. The demons fly down from the mountain tops at night and into the sea to sleigh fish and whale to bring back to the mountain tops, cooking and eating the catch. This explained why the volcanoes light up the night. The Itelmen are very fearful of the mountain demons. They will not climb to the mountain tops as it is believed that the tops are a wasteland of fish and whale bone. If too close to the top, the demons will explode out of the mountain. The Itelmen pay the demons respect by sacrificing food, throwing bits of meat onto the mountains, in order to bargain for safety. It is believed that the sacrifices will keep the demons, or "eruptions", from harming the people during the night raids. Today, the Itelmen language is now highly endangered, and most speakers are aged over sixty and live in scattered communities. However there is a movement to revive the language, and educational materials are being developed. 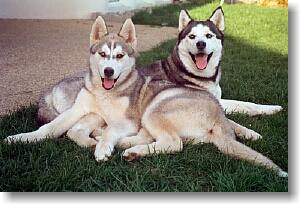 Dogs are also very important in Kamchatkan mythology. This is probably because the dog was such an important figure in life of the peoples of Kamchatka as the only available animal available for hunting and pulling sleds. Because of this, the Itelmens believed that dogs were participants in the creation of the world. Itelmens myths say that the mountains and valleys were formed when the first ancestor Kutkh was riding in dog sleds. When a dog named "Kozei" shook the snow from his coat, an earthquake happened.

The Chukchis (Iygoravetlyan) and Tunguses carry a similar understanding and explanation of volcanic activity. These two tribes are closely related to the Koryak. The ChukIygoravetlyanchis are the Koryaks' neighbor to the north. They carry a similar culture as the Koryaks, only differing in the way they support themselves. The Chukchis settled the coast lines of the north and survived by fishing and hunting marine mammals. The Tunguses, the Koryaks' neighbor to the south, are also like the Koryaks in several ways. The most significant similarity is they are both reindeer herders. The similarity between the beliefs of the Chukchis and Tunguses and the beliefs of the Koryak is apparent by the fact that they all believe in the creator Kutkh. However, the Chukchis and Tunguses believe that Kutkh created Kamchatka in a different way. They believe that Kutkh was the first being on the earth, settling the land of Kamchatka. Kutkh had a family, but one day left his wife and children and disappeared form the land. It is not understood where Kutkh left to, but it is believed that as he left his footsteps sank into the soft earth forming mountains and hills in between where his feet stepped. The Chukchis and Tunguses do not pay homage, and in fact only speak of Kutkh in derision because they believe that his betrayal of his family is the reason for the volcanic activity and swift, dangerous rivers. They scold him for making too many mountains and causing the inconveniences that volcanoes bring to the people.

It is apparent that volcanism has a significant role in the lifestyle of the people who inhabit the Kamchatka Peninsula. The mythology behind this region is as diverse as the people who live there, providing a good indication as to how the people lived. Today, the mythology surrounding the region is not as prominent as it once was; yet the teachings are still passed on within the tribes who call themselves the native people of Kamchatka.