The Battle of Two Chiefs: Mount Mazama and Mount Shasta 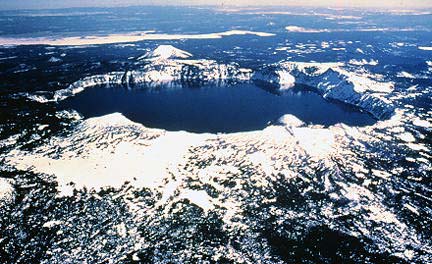 The Klamath Indians of the pacific Northwest tell a legend about a fight between two chiefs. Llao was the chief of the Below World and was at Mount Mazama in Oregon. Skell was the chief of the Above World and stood at the summit of Mount Shasta in northern California. The two mountains are only a hundred miles apart. As darkness covered the land the two chiefs threw rocks and flames at each other. Llao, injured, fell back inside of Mount Mazama and was never seen again. A huge hole was left where he fell into the Below World. Over time, the hole filled with water to make Crater Lake. Volcanologists now know that Crater Lake is a caldera that formed by large explosions and collapse about 6,800 years ago. From Vitaliano (1973).

The Origin of Mount Shasta

The Modoc Indians of northern California have lived in the area a long time and have seen the volcano erupt. Their oral tradition explains how the volcano formed. The Chief of the Sky Spirits was cold in the Above World. One day he used a rotating stone to drill a hole in the sky. Once the hole was finished he pushed in snow and ice. The snow and ice piled up and almost reached the sky. Then, the Chief of the Sky Spirits stepped down to the Earth. He created the trees, rivers, animals, fish, and birds. He even brought his family down and they all lived in the mountains. The sparks and smoke from their fires blew out of the hole in the top of their lodge. When Chief of the Sky Spirits tossed a BIG log on the fire sparks flew up even higher and the Earth trembled. The Chief eventually put out the fire and returned to the Above World. From Vitaliano (1973). 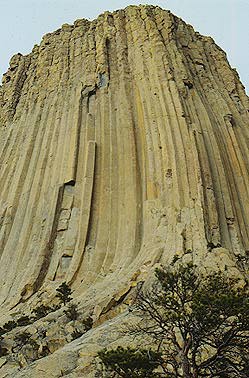 Once there were seven brothers, one day the wife of the oldest brother was carried off by a huge bear to his cave. Her husband mourned her loss greatly. The youngest brother who had great power told him to make 4 arrows with a special design. Then he and the other brothers went to the cave, where they found the bear asleep with his head resting in the wifes lap. They helped her escape. When the bear awoke and found the woman gone he was so mad that he rounded up all the bears in the area, as he was the leader and set out to find the Indians. The youngest of the brothers (who was a holy man) saw the bears coming and he took a small rock from his pocket, sang a sacred song and made the rock grow to the size it is today. The leader bear kept jumping up the sides of the rock trying to get to the top of the rock where the Indians were seeking protection, his claws marking the sides of the tower. On his forth jump they shot an arrow into his head and that killed him. The story ends with the brothers capturing the last two bears and telling them never to bother people again. To make sure, he cut off their ears and tails. That is why to this day bears have short ears and no tails.


From a tourist postcard. 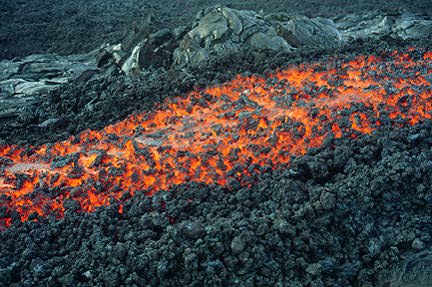 Pele, Hawaii's goddess of fire, can take many forms.
In this photo she is the lava that pours across the ground.
She can also be a white dog, and old woman, or a beautiful young woman.

Papalauahi and the Origin of the Lava Trees

Pele is a skilled rider of the holua, a wooden sled that slides down steep stone ramps. Papalauahi and and other chiefs challenged Pele to see who was the best holua rider. Papalauahi proved by far to be the most skilled. Pele lost her temper. She produced a great flood of lava which overran many of the other chiefs and onlookers. These stone pillars are lava trees in lower Puna.

Vitaliano, Dorothy B., 1976, Legends of the Earth: Their Geologic Origins: Secaucus, N.J.: The Citadel Press.