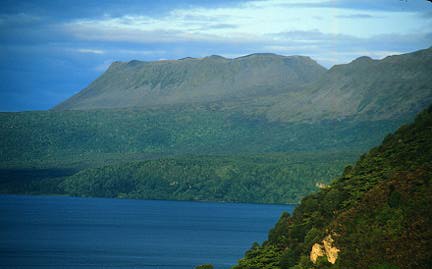 Side view of Tarawera. Photograph courtesy of and copyrighted by Paul J. Buklarewicz. 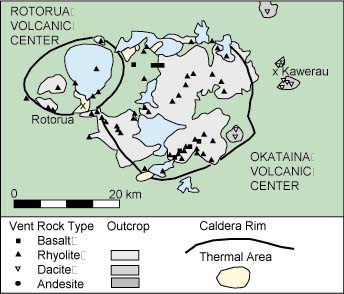 Major structures, lava types, and vent locations at the Rotorua and Okataina volcanic centers within the northern Taupo Volcanic Zone. Simplified from Cole (1990) after Cole (1986).

The Okataina volcanic center is defined by the Haroharo caldera and the Haroharo and Tarawera rhyolite dome complexes. The caldera has a subtle morphology and scalloped outline. It formed between 250,000 and 50,000 years ago during the eruption of at least four ignimbrite sheets. In the last 10,000 years, lava domes and related pyroclastic deposits have filled much of the caldera. The Haroharo and Tarawera rhyolite dome complexes have volumes of 34 and 13 cubic km, respectively. 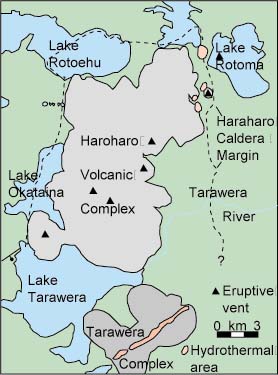 The Haroharo Volcanic Complex is made of overlapping lava domes, lava flows, pyroclastic flows, and airfall deposits. The last eruptions to modify the caldera produced the Rotoiti Breccia (about 50,000 years ago) and the Mangaone Subgroup (about 38,000-28,000 years ago). All of the lavas exposed at the surface are less than 20,000 years old. The 11 vents at the surface are all younger than 9,000 years old. The most recent eruptions were 5,300 (Te Horoa and other domes), 2,880 (Makatiti and other domes), and 1490 BC (Rotokawau to Rotoatua). From Nairn and Cole (1975). 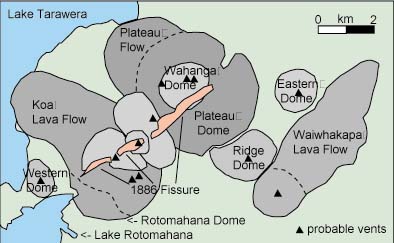 The 1886 eruption at Tarawera was the first eruption of the complex in historic time. The eruption was along a line of craters that cut 5 miles (8 km) across the older domes and extended an additional 5.5 miles (9 km) to the southwest. The vents to the southwest formed the Lake Rotomohana basin and the craters of the Waimangu thermal area. The main explosive pyroclastic eruption produced an estimated 0.3 cubic miles (1.3 cubic km) of ash. The eruption cloud reached an estimated height of about 6 miles (10 km) above the volcano. Nuee ardentes deposited pyroclastic material to the south, east, and north. The main vent for the eruption was filled by the Ruawahia dome. Lava also extruded to form the Tarawera and Wahanga also formed during or shortly after the 1886 eruption. 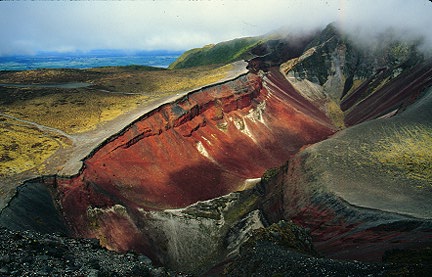 View of Tarawera from the summit. Photograph courtesy of and copyrighted by Paul J. Buklarewicz.

The eruptions at Rotomahana consisted of large phreatic explosions. The explosions were caused by groundwater that was superheated to steam. The explosions formed large craters and threw material over a large area. The most violent episodes of the eruption were over in 4 hours. The villages of Te Ariki, Moura, and Te Wairoa were buried. The eruption killed 150 people. The hydrothermal deposits at the Pink and White Terraces were also buried.

The 1886 basaltic eruption at Tarawera was one of the most violent in historic time. About 2 cubic km of lava was ejected in only 4 hours.

Over the 250,000 year history of the Okataina center, more than 1,200 cubic km of material has been erupted (equal to about 980 cubic km of magma). About half of this material has filled in the caldera. The 200,000 year old Matahina Ignimbrite covered an area of 2,400 square km and traveled as far as 35 km from its source vent.