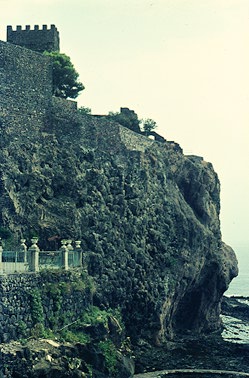 Etna's history is long and complex.

The oldest lavas, exposed on the lowermost flanks of the volcano, erupted 300,000 years ago. Some of these are pillow lavas, indicating Etna started as a submarine volcano and grew above sea level.

Between 150,000-100,000 several volcanic centers coalesced and calderas formed and filled. Between 65,000-25,000 years ago a major vent grew to the southeast of the present summit. Phreatomagmatic eruptions were common during this period.

Most of the summit of this volcano was removed by subsequent caldera collapse. Between 18,000-5,000 years ago four major volcanic centers continued to construct Etna and three calderas formed. 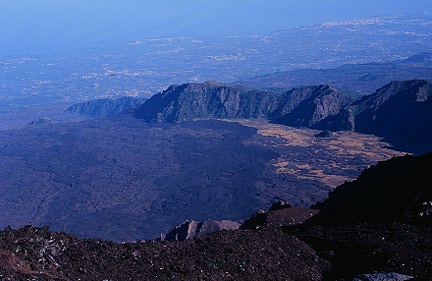 Valle del Bove is a depression that formed about 5,000 years ago by gravity sliding on the east flank of the volcano.

Most of the cones, craters, and pre-historic lava flows and tephra deposits at the summit of Etna formed within the last 5,000 years.   Summit of Mt. Etna, 1971. Photograph copyrighted by Robert Decker. 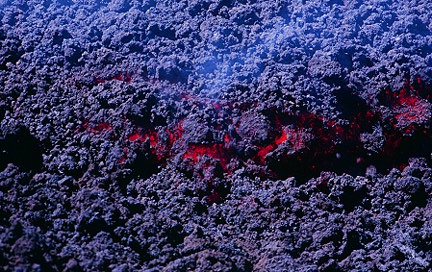 Etna's first recorded eruption was in 1500 B.C. Since then Etna has erupted at least 190 times. Most of these eruptions have a volcanic explosivity index of 1 or 2 and activity consists of gently effusion of lava or Strombolian explosions.

Photograph of 'a'a during the 1984 eruption by Chuck Wood.

One of the most dramatic eruptions of Etna was in 1669. Earthquakes began on February 25 and caused great damage in Nicolosi, about 6 miles (10 km) South and East of Catania. The eruption began on March 11 as a 7 mile (12 km) fissure opened from near Nicolosi to Mt. Frumento Supino, 1 mile (2 km) from the summit. Several more vents formed. On April 12 flows arrived at the walls of Catania. Lava rose to the top of the wall and cascaded over. Lava also knocked over a section of was 120 feet (40 m) long. Large parts of the town were destroyed. Lava reached the sea on April 23. The eruption stopped on July 15.

Fatalities are rare at Etna and reported for only 7 eruptions. Typically, people visiting the summit are too close when explosions throw blocks through the air. In 1843, 36 people were killed by a phreatic explosion at the front of a lava flow. Nine people were killed and 23 were injured (150 tourist were in the area) on September 12, 1979, by a 30-second explosion that threw large blocks near the crater rim. Blocks 10 inches (25 cm) in diameter fell 1,300 feet (400 m) away. Two people were killed and 7 others injured by falling volcanic material 1,600 feet (500 m) from the crater in the 1987 phreatic eruption. 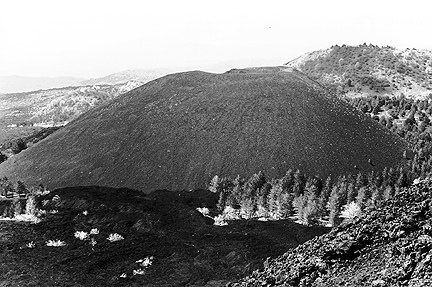 The cinder cone in this photo was constructed by the 1974 eruption of Etna. 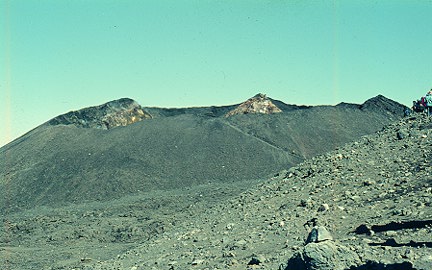 Northeast crater is a pyroclastic cone at the summit of Etna. The vent that formed the cone became active in 1911. The cone is made of pyroclasts ranging in size from ash to bombs up to 3 feet (1 m) in length. Strombolian eruptions are common at this vent. Photograph by Chuck Wood.

The first attempt to divert lava took place at Etna in 1669. The citizens of Paterno protested to the proposed diversion of lava away from Catania and towards their city. The attempt was largely unsuccessful. 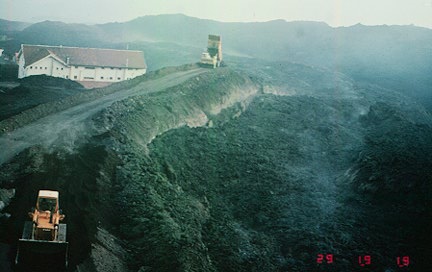 Lava diversion was successful during the 1983 eruption.

Photograph of the Sapienza barrier by Jack Lockwood, U.S. Geological Survey, May 29, 1983.


Visitors to the active front of an aa flows, 1984. Photograph by Chuck Wood. 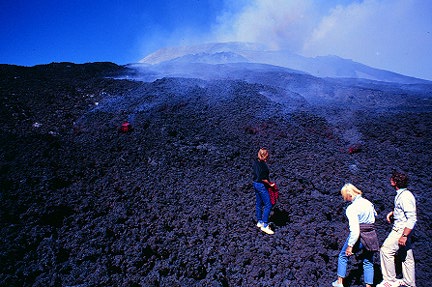 Volcano:
Etna
‹ Etna up Even More About Etna ›