Even More About Etna 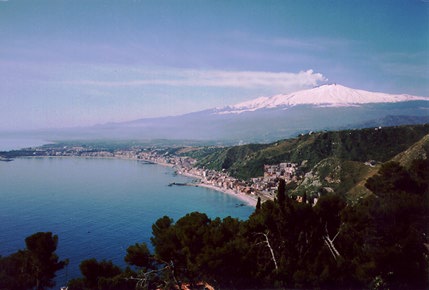 Looking south along the coast of Sicily to Etna. Taormina is in the foreground.
Photograph by Mike Lyvers taking during the 1993 eruption.

In mythology, Etna was identified as the location of the forge of Volcan, home of the Cyclopses, and where the giant

Enceladus laid (eruptions being his breath and earthquakes his motion). Etna's beauty, frequent eruptions, and long record of eruptions makes it one of the world's best known volcanoes. With hundreds of papers published on nearly every aspect of Etna's geology it is probably one of the world's most studied volcanoes. 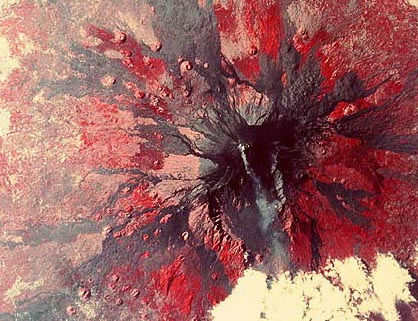 NASA Sir-C image of Etna. Summit craters are near the center of the image. Valle del Bove is east (right) of the summit. Cinder cones are abundant on Etna and most visible in this image on the southwest flank. The right photo is a Skylab False color image. The red color reflects the vegetation present. 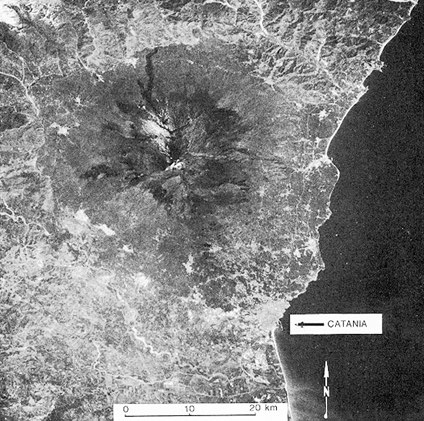 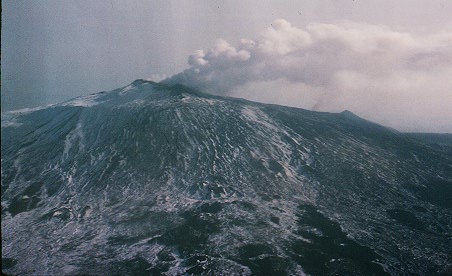 Etna is one of the largest continental volcanoes. The base of the volcano is about 36 by 24 miles (60 x 40 km). Below an elevation of about 9,500 feet (2,900 m) Etna is a shield. The upper 1,200 feet (400 m) is a stratovolcano made of several coalesced vents. Much of the surface of the volcano is covered by historic lava flows. Most eruptive products are made of andesite. The eruption rate of Etna is about one-sixth that of Kilauea.

Volcano:
Etna
‹ More about Etna up