Rocks are formed on Earth as igneous, sedimentary, or metamorphic rocks. Igneous rocks form when rocks are heated to the melting point which forms magma. Sedimentary rocks are formed from the cementing together of sediments, or from the compaction (squeezing together) of sediments, or from the recrystallization of new mineral grains which are larger than the original crystals. Metamorphic rocks form from heat and pressure changing the original or parent rock into a completely new rock. The parent rock can be either sedimentary, igneous, or even another metamorphic rock. The word "metamorphic" comes from Greek and means "To Change Form".

The diagram above shows you how the rocks on Earth have been changed continually over time from one rock type to another. This changing of rock types is called the "Rock Cycle".

There are 3 factors that cause an increase in pressure which also causes the formation of metamorphic rocks. These factors are;

The huge weight of overlying layers of sediments.

Stresses caused by plates colliding in the process of mountain building.

Stresses caused by plates sliding past each other, such as the shearing stresses at the San Andreas fault zone in California.

Metamorphism can be instantaneous as in the shearing of rocks at plate boundaries or can take millions of years as in the slow cooling of magma buried deep under the surface of the Earth.

There are three ways that metamorphic rocks can form. The three types of metamorphism are Contact, Regional, and Dynamic metamorphism.

Contact Metamorphism occurs when magma comes in contact with an already existing body of rock. When this happens the existing rocks temperature rises and also becomes infiltrated with fluid from the magma. The area affected by the contact of magma is usually small, from 1 to 10 kilometers. Contact metamorphism produces non-foliated (rocks without any cleavage) rocks such as marble, quartzite, and hornfels.

In the diagram above magma has pushed its way into layers of limestone, quartz sandstone and shale. The heat generated by the magma chamber has changed these sedimentary rocks into the metamorphic rocks marble, quartzite, an hornfels.

Dynamic Metamorphism also occurs because of mountain-building. These huge forces of heat and pressure cause the rocks to be bent, folded, crushed, flattened, and sheared.

Foliates are composed of large amounts of micas and chlorites. These minerals have very distinct cleavage. Foliated metamorphic rocks will split along cleavage lines that are parallel to the minerals that make up the rock. Slate, as an example, will split into thin sheets. Foliate comes from the Latin word that means sheets, as in the sheets of paper in a book.

Silt and clay can become deposited and compressed into the sedimentary rock shale. The layers of shale can become buried deeper and deeper by the process of deposition. Deposition is the laying down of rock forming material by any natural agent (wind, water, glaciers) over time. Because these layers are buried, temperatures and pressures become greater and greater until the shale is changed into slate. Slate is a fine-grained metamorphic rock with perfect cleavage that allows it to split into thin sheets. Slate usually has a light to dark brown streak. Slate is produced by low grade metamorphism, which is caused by relatively low temperatures and pressures.

Slate has been used by man in a variety of ways over the years. One use for slate was in the making of headstones or grave markers. Slate is not very hard and can be carved easily. The problem with slate though is its perfect cleavage. The slate headstones would crack and split along these cleavage planes as water would seep into the cracks and freeze which would lead to expansion. This freeze-thaw, freeze-thaw over time would split the headstone. Today headstones are made of a variety of rocks, with granite and marble being two of the most widely used rocks. Slate was also used for chalk boards. The black color was good as a background and the rock cleaned easily with water. Today it is not very advantageous to use this rock because of its weight and the splitting and cracking over time. 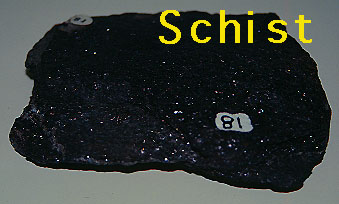 Schist is a medium grade metamorphic rock. This means that it has been subjected to more heat and pressure than slate, which is a low grade metamorphic rock. As you can see in the photo above schist is a more coarse grained rock. The individual grains of minerals can be seen by the naked eye. Many of the original minerals have been altered into flakes. Because it has been squeezed harder than slate it is often found folded and crumpled. Schists are usually named by the main minerals that they are formed from. Bitotite mica schist, hornblende schist, garnet mica schist, and talc schist are some examples of this. 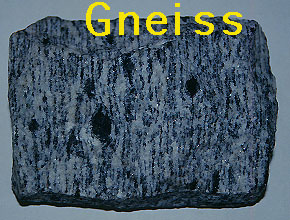 Non-Foliates are metamorphic rocks that have no cleavage at all. Quartzite and marble are two examples of non-foliates that we are going to study. 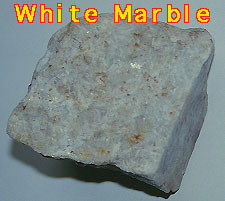 Write a definition in your own words of what a metamorphic rock is.

What are the three agents of metamorphism?

What are the three types of metamorphism?

In your own words write a definition of the rock cycle.