The land around you, no matter where you live, is made of rock. If you live in a place that has good rich soil, the soil itself is finely broken down or weathered rock.

People that live in a desert region can easily find rocks on the surface. These rocks lay on a surface of clay that is also a product of weathering rock. Weathering is the process of breaking down rocks and minerals into smaller pieces by water, wind, and ice.

Sedimentary rocks are formed from the breaking apart of other rocks (igneous, metamorphic, or sedimentary rocks) and the cementation, compaction and recrystallization of these broken pieces of rock.

The photo above shows layers of lava and ash in Hawaii that will, over time, and with the help of bacteria, break down into fertile soil.

The diagram above shows layers of sediment that were laid down in a lake. In the spring the lake receives an influx of water from the mountain snow melt. This snow melt carries with it a large amount of sediment that becomes suspended in the lake water. As the sediment settles out during the summer and especially in the winter, if the lake becomes frozen over, the sediments come to rest on the bottom. The heaviest and largest particles settle out first and the lightest sediments such as silts and clays settle out last. The number 1 shows sediment that would have been laid down during 1994, number 2 in 1995, and number 3 would have been laid down in 1996. The gray area above the 3 would be the latest layer being laid down at the present time. This laying down of rock-forming material by a natural agent is called deposition. Natural agents of deposition are water, ice, gravity, and wind.

Sediment is deposited in flat, horizontal layers with the oldest layers on the bottom and the younger layers laying on and over the older layers. Geologists use this knowledge to read layers of sedimentary rock like the pages in a book. They can date layers by the fossils that are found in them. If a layer has a fossil in it that is known to be 50 million years old the layer itself must be at least 50 million years old and the layers below it have to be older than 50 million years.

The size of sediment is defined by the size of the particles that make up the sediment. The largest sediment size is called a boulder. Boulders have a diameter that is larger than 256 millimeters (about 10 inches). Cobbles are the next largest sediment, they are 64 - 256 mm in diameter (about 3-10 inches). Pebbles are next in size and are 4-64 mm in diameter (about 1/6-3 inches). The next sizes of sediments are very small, granules are 2-4 mm, sand 1/16-2mm, silt 1/256-1/16 mm, and the smallest sediment size is clay which is less than 1/256 of a millimeter in diameter.

Sedimentary rocks are formed in three ways from these different sized sediments.

A sedimentary rock is a layered rock that is formed from the compaction, cementation, and the recrystallization of sediments.

Compaction is the squeezing together of layers of sediment due to the great weight of overlying layers of rock. This squeezing of the layer results in reducing the thickness of the original layer. When the layers are reduced in thickness the pore spaces around the sediments are also reduced, which leads to a tighter packing of the layers.

Cementation is the changing of sediment into rock by filling spaces around the sediments with chemical precipitates of minerals. binding the sediments, and forming solid rock. Calcite and silica are common minerals that cement the sediments together.

The photo above shows layers of sedimentary rocks that were deposited in flat horizontal layers. These layers were then uplifted and bent by mountain building.

Running water, such as the mountain stream above, sorts and transports more sediment than any other agent of deposition.

Clastic sedimentary rocks are made of pieces of rock or mineral grains that have been broken from preexisting rock. These particles and grains have become solid rock by the processes of compaction or cementation of sediments. Some clastic rocks are conglomerate, shale, breccia, gray and red sandstone, siltstone, and graywacke.

Non-clastic sedimentary rocks form from the precipitation (Precipitation is the separating of a solid from a solution) of minerals from ocean water or from the breakdown of the shells and bones of sea creatures. Sea animals such as coral produce calcium carbonate solutions that harden to form rock. As the chemicals, that comes from the mineral or biological precipitation, mix with sediments on the floor of the ocean or lake they crystallize and grow in the spaces around the sediment. When these crystals grow large enough to fill the spaces they harden and form a solid rock. 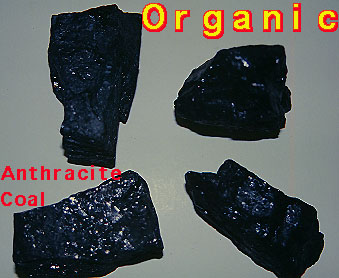 This compressed vegetation forms coal. The longer and deeper that coal is buried makes it of higher quality. Peat is the first stage of coal formation. Lignite is the next grade of coal followed by bituminous and the highest grade, anthracite. Anthracite is actually a metamorphic rock. It forms during mountain building when compaction and friction are extremely high. This form of coal burns very hot and almost smokeless. It is used in the production of high grade steel. 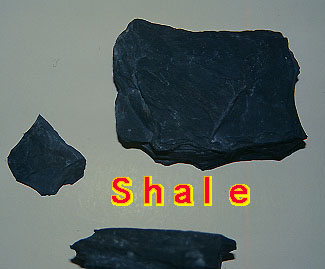 Shale is one of the most common sedimentary rocks. It is composed of silt or clay that has been compacted or squeezed together to form a solid rock. Shale is usually found in thin layers. The silt or clay that composes shale is made of very small pieces of weathered rock. The pieces are from 1/16 to 1/256 of a millimeter in diameter. The color of a sample of shale is that of the clay or silt that it was formed from. 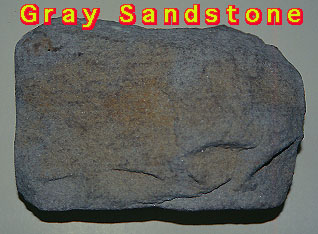 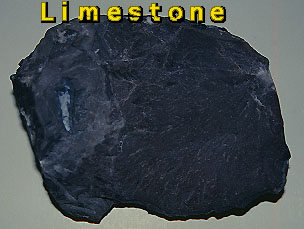 Limestone caves are an interesting geological feature. They form because the limestone deposits located under the ground are chemically dissolved by moving ground water. The ground water contains minerals that make the water slightly acidic. When an acid comes into contact with a rock that is composed of calcium carbonate a chemical reaction takes place. The acid "eats" the limestone. The calcium carbonate then goes into the ground water which moves down farther into the cave. The water will find its way into small crack and crevasses. The dripping water will create formations called stalactites and stalagmites.

The photo above shows both stalactites and stalagmites growing together in Jewel Cave National Park in South Dakota. 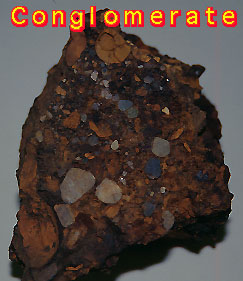 Conglomerate is a clastic sedimentary rock that forms the cementing of rounded cobble and pebble sized rock fragments. Conglomerate is formed by river movement or ocean wave action. The cementing agents that fill the spaces to form the solid rock conglomerate are silica, calcite, or iron oxides.

Notice in the photo above the rounded rock particles in the conglomerate. These rounded particles make conglomerate different from the next rock you are about to study, breccia. 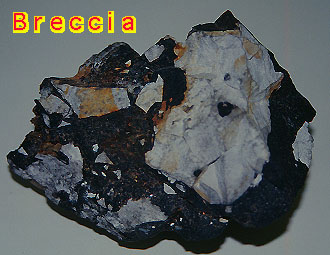 In your own words describe the process of weathering.

What are the three ways that a sedimentary rock forms?

How does a limestone cave form?