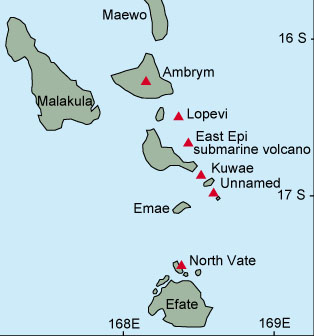 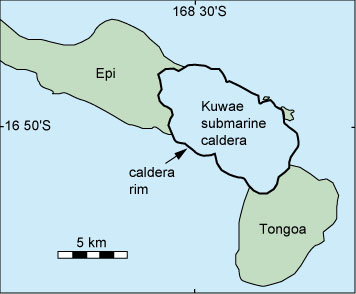 Tongoa and Epi islands once formed part of a larger island called Kuwae. Local folklore tells of a cataclysmic eruption that destroyed this island, leaving the two smaller islands. Monzier and others (1994) describe the 7.5 by 4 mile (12 x 6 km) oval-shaped caldera that formed during the eruption. They date the event at 1420-1430 A.D. Collapse associated with caldera formation may have been as much as 3,600 feet (1,100 m). Monzier and others estimated that 32-39 cubic km of magma was erupted, making the Kuwae eruption one of the largest in the last 10,000 years and comparable to Santorini and Crater Lake. Map of Kuwae submarine volcano and adjacent islands from Monzier and other (1994).