The eruption of Santorini in Greece in 1,650 B.C. was one of the largest (VEI=6) in the last 10,000 years. About 7 cubic miles (30 cubic km) of rhyodacite magma was erupted. The plinian column during the initial phase of the eruption was about 23 miles (36 km) high. The removal of such a large volume of magma caused the volcano to collapse, producing a c aldera. Ash fell over a large area in the eastern Mediterranean and Turkey. The eruption probably caused the end of the Minoan civilization on the island of Crete. 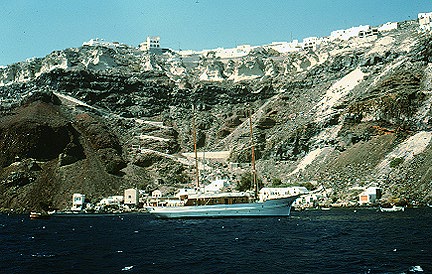 Santorini is complex of overlapping shield volcanoes. Basalt and andesite lava flows that make the shield are exposed in the cliff below the town of Phira. Some of t he cliff is thought to be a caldera wall associated with an eruption 21,000 year ago. Druitt and Francaviglia (1992) found evidence of at least 12 large explosive eruptions in the last 200,000 years at Santorin i. The white layer at the top is the Minoan tephra from the 1,650 B.C. eruption. Photography copyrighted by Robert Decker. 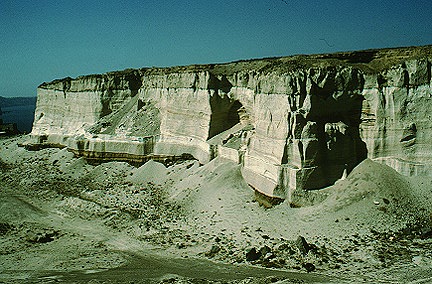 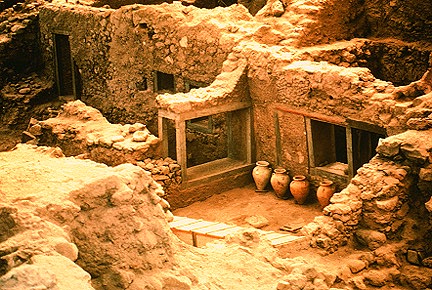 Akroteri, a Minoan city on the south part of Thera, is being excavated. About 3-6 feet (1-2 m) of ash fell on the city which had a population of about 30,000. The residents appear to have been successfully evacuated prior to the eruption. No bodies hav e been found in the ash like those at Vesuvius. Archeologists also reported that movable objects had been taken from the city. Photography copyrighted by Robert Decker. 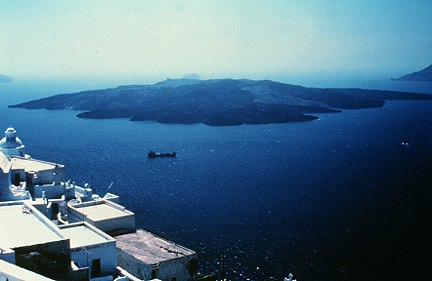 The Kameni Islands formed after the caldera. Eleven eruptions since 197 B.C. have made the two islands. The most recent eruption at Santorini was in 1950 on Nea Kameni, the northern island. The eruption was phreatic and lasted less than a month. It co nstructed a dome and produced lava flows. Photography copyrighted by Robert Decker.

For a description of the tectonics of the Hellenic arc and the Aegean Sea visit the volcanic island of Nisyros.

Click here, for a Space Shuttle photo of Thera.

For more information and pictures of Santorini, Check out Greeka.com!

For even more information and pictures of Santorini, Check out Visit-Santorini.com!

Georgalas, G.C., 1962, Greece. Catalogue of the Active Volcanoes of the World including solfatara fields. 12, 40 p.