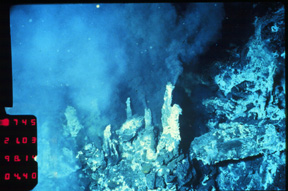 Zinc-Copper volcanogenic massive sulfide (VMS) deposits have been observed as they form at mid-ocean ridges. Chimneys formed at the ridges have as much as 29 weight % zinc and 6 weight % copper in sulfide minerals (pyrrhotite, pyrite, sphalerite, and chalcopyrite). The minerals are dissolved in fluids at temperatures as high as 380 C flowing at 1-5 m/sec.

Lead, zinc, and cooper are found in VMS deposits. The deposits form in deep ocean water by the precipitation of sulfide minerals released by submarine volcanoes. 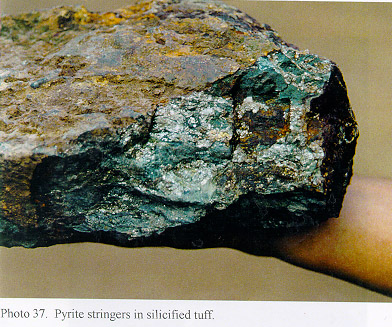 There are three types of VMS deposits:

Kuroko-style VMS deposits are found in dacite-rhyolite domes that erupted in the deep water of back-arc (behind the main volcanic arc) basins. Kuroko deposits are zoned from copper-rich near the center, to zinc-rich, to lead-rich at the outer edges of the deposit. The fluids that form Kuroko deposits have twice the salinity of average ocean water and temperatures of 250-300 C. This cross-section of a typical Kuroko deposit is from Sato (1974) and Franklin and others (1981). Modern-day VMS deposits of the Kuroko-style have been observed as they form in the back-arc basin of the Okinawa Trough (Halbach and others, 1989).

The deposit at Bathurst in Canada is an example of lead-zinc-copper VMS. Hydrothermal solutions associated with Keweenawan flood basalts have produced copper deposits in the Lake Superior area. Between 1845 and 1968, over 13 billion pounds of copper and 16 million ounces of silver were produced from the Keweenawan district.

The porphry (not VMS) mine at El Abra in Chile will produce 500 million pounds of copper annually.

Uses for Copper, Lead, and Zinc

Copper was used as long ago as 8000 BC for tools, weapons, and ornaments. The discovery of bronze (copper and tin alloy) about 3500 BC marked the onset of the Bronze Age. Romans used lead for the plumbing and sewage systems. In Modern times, the electrical conductivity, ductility, and resistance to corrosion of copper, lead, and zinc, make them very useful in alloys. Copper is used for electrical applications (50%), general and industrial engineering applications (20%), building and construction (15%), transportation (11%) and other applications. Lead is used in storage batteries, paints, dyes, explosives, insecticides, and rubber products.