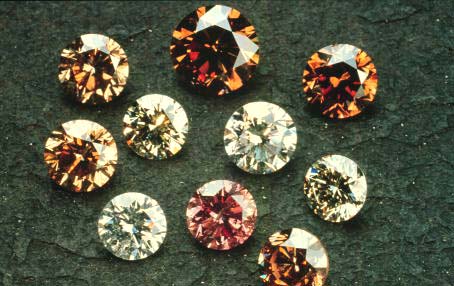 Diamonds are crystalline carbon and the hardest known substance.

This photo shows diamonds from the Argyle Mine in northern Western Australia.

Diamonds are brought to the surface from the mantle in a rare type of magma called kimberlite and erupted at a rare type of volcanic vent called a diatreme or pipe. Kimberlite is a gas-rich, potassic ultramafic igneous rock that contains the minerals olivine, phlogopite, diopside, serpentine, calcite, and minor amounts of apatite, magnetite, chromite, garnet, diamond, and other upper mantle minerals. Upper mantle xenoliths are found in some kimberlite and provide clues to the magma's origin. The source depth for kimberlite magmas is estimated at 200 km, more than twice as deep as the source region for most magmas. At a depth of 200 km the pressure is 60,000 times greater than the surface and the temperature is about 1500 C. Kimberlite magmas are rich in carbon dioxide and water which brings the magma quickly and violently to the surface. Most kimberlites occur as multiple intrusive events. Kimberlite was named for the rock associated with diamonds in Kimberley, South Africa.

Kimberlite magmas form "pipes" as they erupt. A tuff cone is at the surface and formed by base-surge deposits. In the subsurface, a funnel-shaped body narrows to a depth of hundreds of meters. The pipe (also called a diatreme) is filled with kimberlite, with or without diamonds (only 1 in 5 of the pipes at Kimberley contain diamonds). 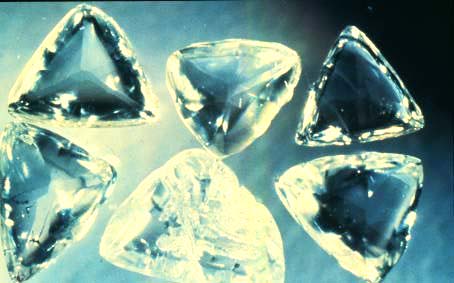 Most diamonds are used in drill bits and diamond tools. A small number are used for glass cutters and surgical instruments. Only the finest are used as gems.

Australia is currently the world's largest producer of diamonds. Most of these diamonds are low quality and used for industrial purposes. Most of the diamonds are from the Argyle diamond pipe in northern Western Australia. The pipe at Argyle is made of lamproite, not kimberlite. The mine produced 27.8 million carats (1 ct = 200 mg; 5 carats = 1 gram) of low grade diamonds in 1993-1994. Because of the high rate of production at Argyle, mining operations will end within the next few years. The mines at Kimberley, South Africa have produced a total of more than 200 million carats since the 1870s. About half of South Africa’s diamonds are gem quality.