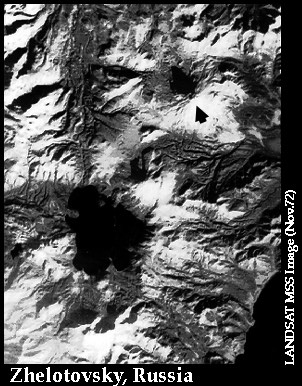 Zhelotovsky is a conical stratovolcano with a crater situated on the western portion of its summit. After 100 years of rest, it's last explosive eruption was from February to April 1923. This eruption resulted in the loss of part of Zhelotovsky's summit. This volcano, also known as Utashut, has several older cinder cones located at the base of its northwestern slope. No fresh lava flows have been discovered around the volcano. Scientists believe that Zhelotovsky was formed in three stages, first it was a shield volcano, secondly a younger cone formed within the shield's caldera. During this stage explosive eruptions increased and lava flows were inter-bedded with layers of pumice, tuff and scoria. After a long period of time a explosion destroyed the upper cone and created a summit caldera.

Erlich, Edward 1986 Geology of Calderas of Kamchatka and Kurile Islands with Comparison to Calderas of Japan and the Aleutians, Alaska Open-File Report 86-291, US Dept. of the Interior- Geological Survey, p100.

Vlodavetz V.I., Piip B. I. 1959 Kamchatka and Continental Areas of Asia. Catalog of Active Volcanoes of the World, Rome IAVCEI, 8: p9-10.