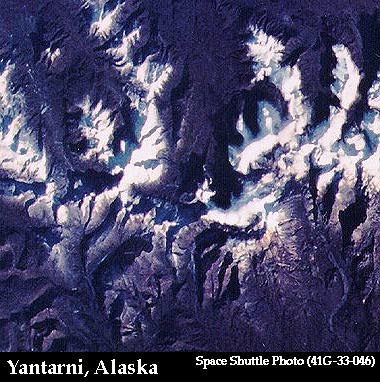 Yantarni is a stratovolcano. It is considered an immature volcano, because it lacks a large, shallow magma chamber. It is made mostly of andesite and dacite. This volcano is ~2400 ft (730 m) high. Its volume is 3.5 cu km. Yantarni formed near a high angle fault at a site of previous activity involving magma. Its first lava flows were andesitic. They came from several different vents. The breached cone formed a debris avalanche deposit. This was followed by a directed blast and formation of a dome and pyroclastic flows. These pyroclastic flows are about 1 cu km in volume. They extend 2.5 miles (4 km) from the cone. Yantarni was not discovered until 1979. It has erupted only once. That was almost 2800 years ago.