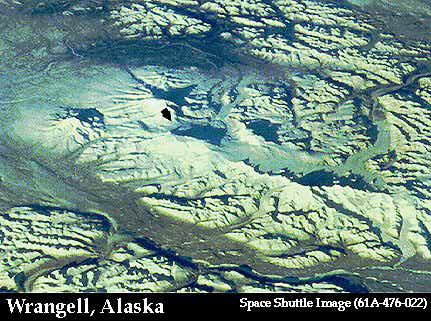 Mt. Wrangell is located in south central Alaska. This volcano was named after Baron Ferdinand Petrovich von Wrangell, the Governor of Alaska from 1830-1836. It is a huge shield volcano. Wrangell is covered with glaciers. The collapse caldera on the summit of the volcano is only about 2000 years old. This caldera is about 2.5 by 3.7 miles (4 by 6 km) wide and ~0.6 miles (1 km) deep. It is filled with ice. The caldera is still releasing heat from inside the Earth. It has three craters on its rim. Solfatara activity also takes place there. Wrangell has erupted five times. The last eruption was in 1902.

Volcanic heat transfer from Wrangell has been increasing since the Great Alaskan Earthquake of 1964. This could cause serious problems for the area if an eruption occurs. Mt. Wrangell has more snow and ice in its caldera than any other active volcano in the world. If the volcano erupted, it would melt the ice. This would cause dangerous flooding and mudslides.

Finley, Don, "Eruption of Alaska's Mount Wrangell Could Cause Severe Flooding," Dept. of the Interior U.S. Geological Survey, May 14, 1987.