What Are Lava Domes Made Of?

The lava that forms the domes can have a very wide range of composition, anywhere from basalt to rhyolite. However, the lavas that most frequently form domes are generally lavas that are higher in Silica (SiO2) and are thus generally more viscous.  Lava domes take on a variety of textures, but are often blocky in nature. 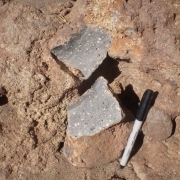 A block of dacite lava. Dacite lava can frequently be found creating lava domes due to its relatively viscous nature.

Occasionally, even obsidian (Rhyolite Glass) will be erupted and can form lava domes, such as Glass Mountain in California. 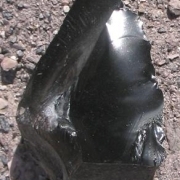 A sample of black rhyolite glass known as Obsidian, sometimes seen forming lava domes such as Glass Mountain in California.

‹ How Does a Lava Dome Form? up Features of Lava Domes ›