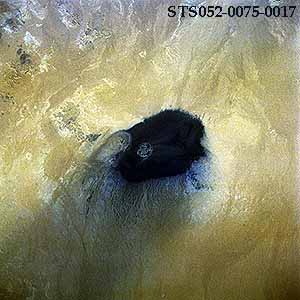 Waw an Namus is an exotic volcano deep in the desert of Libya. A low caldera about 4 km in diameter is surrounded by a 5 - 10 km wide dark black deposit of ash that stands out starkly against the yellowish desert. The few people who have visited have been struck by its beauty: The Italian geologist Angelo Pesce wrote that as seen from the rim, one is "overwhelmed by a scene of rare beauty....Inside, the only thing one wishess is to be alone and wander in admiration from one end to the other." But Pesce also complains about the "veritable cloud of mosquitos, which not having many occasions to feed on fresh blood warmly welcome visitors to their desert realm. The Arabic word Namus means mosquito."

On the floor of the caldera is a 120 m high cinder cone, the apparent source of the ash apron, and three small salty lakes. The facts that one lake is warm, and the entire feature is not deeply eroded suggest that the eruptions which formed it may have occurred within the last few thousands of years; no historic eruptions are known.

No lava flows are present at the crater, but small rocks ejected from the central cone include feldspatic basalts, dunite and fist-sized nodules of green olivine. The dunite and olivine suggest that the magma that formed the volcano rose swiftly from deep in the mantle. Pesce considers Waw an Namus to be related to the extensive basaltic lava flow field to the north, Djebel Haroudj.

The older name for this feature is Uau en Numas.