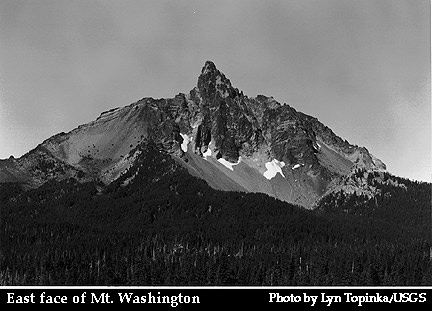 Mount Washington is a shield volcano about 3 miles (5 km) in diameter. A summit cone, made of cinder, lava flows, and intrusive rocks, caps the shield. The volcano is probably less than a few hundred thousand years old. The most recent eruption was 1,330 years ago. Mount Washington has not erupted in historic time.

Additional information about Mount Washington is presented on the Cascade Volcano Observatory homepage of the U.S. Geological Survey.

Summit of Washington. The summit is a plug which filled the original volcanic conduit. Photo courtesy of the Oregon Department of Geology and Mineral Industries.