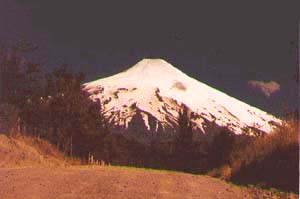 Villarrica is an open system basaltic volcano with a long historic record that includes four fatal eruptions. A very large (VEI=5) eruption was dated ca. 1810 BC by the carbon-14 method. The first historic eruption was recorded in 1558. Since then, there have been at least 54 small to moderate eruptions. There have been two moderate-large eruptions in 1640 and 1948.

Mudfows, associated with eruptions, killed a total of at least 73 people in 1949, 1963, 1964, and 1971. The mudflows of 1971 were caused by lava flows that melted ice. Many homes and agricultural installations were destroyed in the Chaillupen and Turbio Valleys. Concrete bridges across major bridges were also cut. About 350 people were killed in Villarrica village by a tectonic earthquake in 1575.

On Oct. 16th, a red glow was not visible above the volcano, but strong, deep noises were heard every 7-10 minutes.

On 17-18 October, the Villarrica Volcano exhibited strong Strombolian eruptions at irregular intervals from its central crater. Showers of fluid bombs fell on the crater rim and upon the upper S and W flanks. Tephra covered the upper flanks of the cone.

This information was summarized from the Global Volcanism Program.

Seismic activity at the Villarrica Volcano has increased since 22 August. Increased amplitude in harmonic tremor signals have been noted. Periods of high amplitude tremor lasted 2-30 hours, alternating with background level tremor. On 15 September, an energetic LP event is considered to have been associated with a small explosive event in the crater. On 4 October, new ash and projectiles were observed on the crater rim and indicate that a small explosive event occurred. Hybrid earthquakes have also been increasing in number since 1 October. The OVDAS has recommended that local authorities move to a Level 2 (Green) in the "Semaforo" (traffic light) alert scheme adapted for the volcano. If the harmonic tremor increases in amplitute or high levels are maintained for long periods recommendations will be made to move to Level 3 (Amber).

The information was summarized from the Global Volcanism Program.