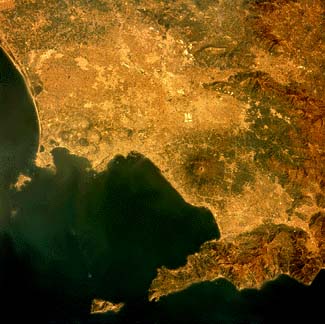 Vesuvius, Space Shuttle photograph. Compare to the map below. The Somma Rim, a caldera-like structure formed by the collapse of a stratovolcano about 17,000 years ago, is visible as an arcuate dark area to the right and above Vesuvius. The Bay of Naples is on the lower left. The small hook of land near the right margin of the photo is part of a caldera of the Phlegraean Fields volcanic region. The caldera formed about 34,000 years ago. From 1983-1985 an area of 31 square miles (80 square kilometers) was uplifted, in places up to 5.9 feet (1.8 meters), damaging homes, the harbor, and the tourist industry. Ultimately 36,000 people were relocated. 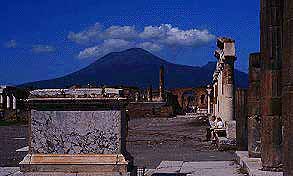 Vesuvius is famous for the catastrophic eruption in 79 A.D. that buried the towns of Herculaneum and Pompeii. Photograph is looking northwest from Pompeii to Vesuvius. Photo by Chuck Wood.

Vesuvius is a complex volcano. According to Peter Francis (p. 351) a complex volcano is "an extensive assemblage of spatially, temporally, and genetically related major and minor [volcanic] centers with their associated lava flows and pyroclastic flows." Vesuvius has a long history. The oldest dated rock from the volcano is about 300,000 years old. It was collected from a well drilled near the volcano and was probably part of the Somma volcano. After Somma collapsed about 17,000 years ago, Vesuvius began to form. Vesuvius is a stratovolcano. This vertical aerial photograph shows Vesuvius (bottom), the steep caldera wall of Somma (middle), dark lava flows from the 1944 eruption (north of Vesuvius, against the wall of Somma), and the slope of the former Somma volcano (top). U.S. Navy photograph from Green and Short (1971). 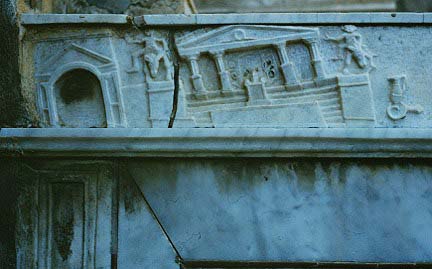 In 5960 B.C. and 3580 B.C., Vesuvius had two eruptions that rate among the largest known in Europe. The area was frequently jolted by large earthquakes. This decorative stonework records the damage caused by an earlier earthquake, perhaps the earthquake of 62 A.D. that preceded the 79 A.D. eruption. Copyrighted photograph of Robert Decker. 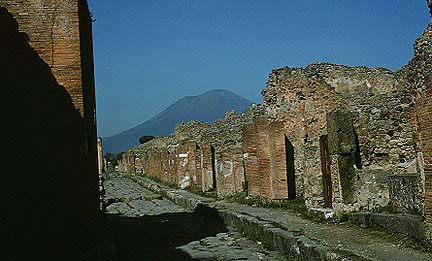 The 79 A.D. eruption of Vesuvius was the first volcanic eruption ever to be described in detail. From 18 miles (30 km) west of the volcano, Pliny the Younger, witnessed the eruption and later recorded his observations in two letters. He described the earthquakes before the eruption, the eruption column, air fall, the effects of the eruption on people, pyroclastic flows, and even tsunami. Volcanologists now use the term "plinian" to refer to sustained explosive eruptions which generate high-altitude eruption columns and blanket large areas with ash. It is estimated that at times during the eruption the column of ash was 20 miles (32 km) tall. About 1 cubic mile (4 cubic kilometers) of ash was erupted in about 19 hours. Volcanoes by Peter Francis contains several direct passages from Pliny the Younger and describes the archeology of Pompeii and Herculaneum. Copyrighted photograph of a street in Pompeii by Robert Decker, 1971. Vesuvius is in the background. 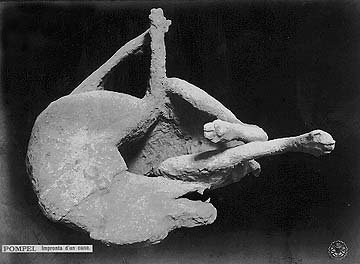 About 10 feet (3 m) of tephra fell on Pompeii, burying everything except the roofs of some buildings. The city was abandoned and its location forgotten. In 1595, excavations discovered artifacts at Pompeii and centuries of pillaging followed. Archeological excavations began in the mid-nineteenth century. Now, much of Pompeii has been excavated and it has revealed much about how people lived during that time (and died during the eruption). There are numerous molds of people in their final moments. The mold of a dog is shown in the above photo. The poor animal was chained to a post and struggled for hours before finally succumbing to the ash. 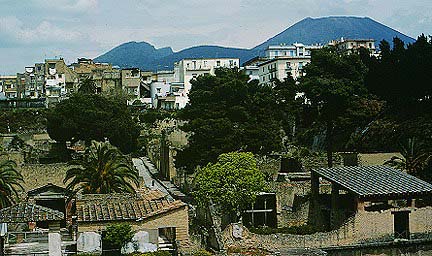 Herculaneum was buried under 75 feet (23 m) of ash deposited by a pyroclastic flow. This photo shows buildings that were near the waterfront. Photograph copyrighted and provided by Steve O'Meara of Volcano Watch International. 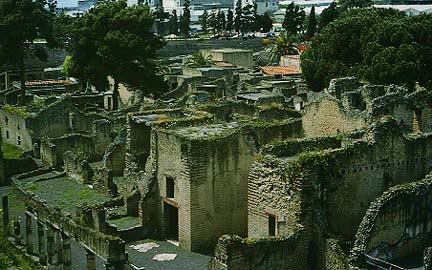 Herculaneum, once a seaside resort, is now surrounded by the modern city of Ercolano. About 5,000 people lived in the city at the time of the eruption. Photograph copyrighted and provided by Steve O'Meara of Volcano Watch International. 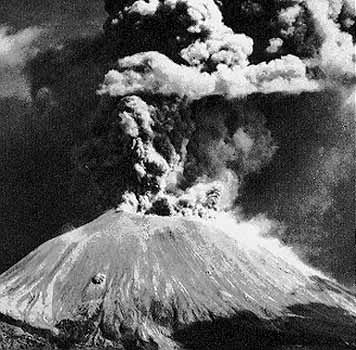 Click here to see postcards that show early episodes of the 1913-1944 eruption. 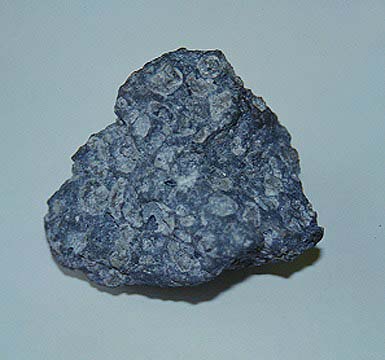 The rocks at Vesuvius are called tephrite. A tephrite is basaltic in character and contains the following minerals: calcic plagioclase, augite, and nepheline or leucite.

Vesuvius is a dangerous and deadly volcano. Mudflows and lava flows from the eruption in 1631 killed 3,500 people. About 3,360 people died in the 79 A.D. eruption from ash flows and falls. Studies of past eruptions and their deposits continue. These studies help volcanologists understand the hazards associated with future eruptions. The population density in some areas of high risk is 20,000 to 30,000 per square km. About 3 million people could be seriously affected by future eruptions. In the first 15 minutes of a medium- to large-scale eruption an area with a 4 mile (7 km) radius of the volcano could be destroyed (Dobran and others, 1994). About 1 million people live and work in this area.

There are no signs of volcanic unrest at Vesuvius at the present time (February 1996).

Vesuvius is above a subduction zone. The African plate is moving northward at about one inch (2-3 cm) per year and is slowly closing the Mediterranean basin. As it moves to the north, the African plate is pushed beneath the Eurasian plate.

More information is available on the Vesuvius Wikipedia page.